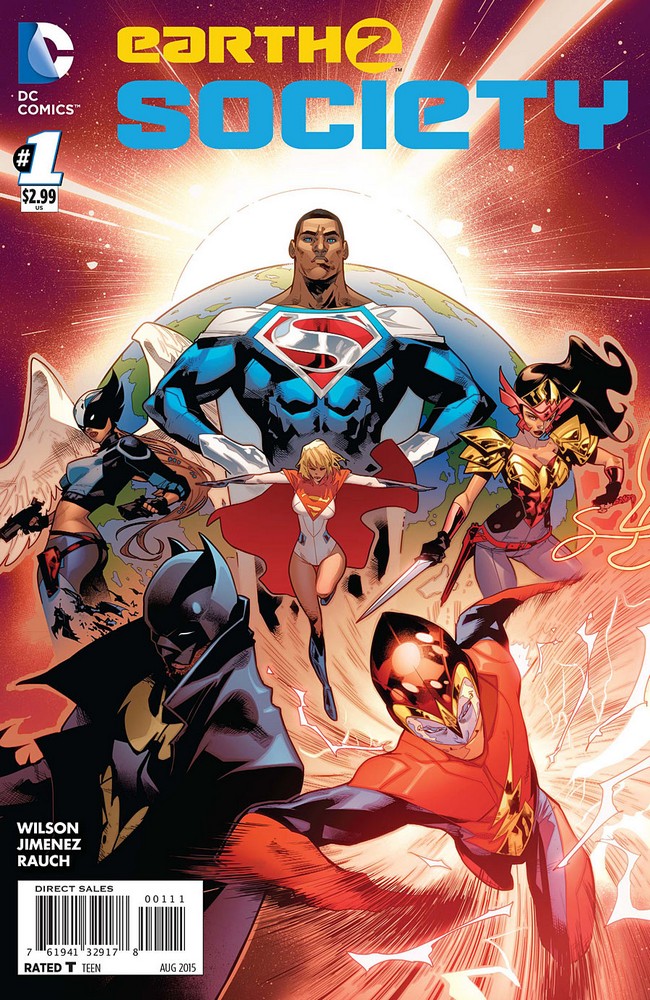 Convergence led to a new beginning for Earth 2, and this issue has some of the spark and excitement that made the series so successful during the reign of James Robinson.

Part of what made Earth 2 work for me in the beginning of the title was how fresh it was, and the world that James Robinson was building. Some of that spirit has returned as the survivors of Convergence and World’s End work to shape this new planet into a home for themselves. As with any world being rebuilt, there are bad folks looking to seize the instability for their own nefarious purposes, but the heroes of Earth 2 are also around to try to keep things in check.

The tradition of Earth 2 being a comic with a huge cast continues and Wilson handles them well. While it is obvious Batman will be a major player going forward, the rest of the field of major players is not yet fully defined, and we get glimpses of a lot of fan favourite characters throughout. Even though things are far from perfect, I felt a sense of optimism from the characters, which is a welcomed feeling as this world rebuilds. There will be many challenges, and Wilson writes this issue well enough that I want to find out what they are. Dick Grayson is written very well, and he’s a solid choice of main character for this issue considering the events of Convergence. His voice acts as a natural tie from that event to this issue, and Wilson made a great choice using him to expand on how the rebuilding efforts of Earth 2 have gone. This first issue gave me more than enough to want to continue reading this book, and I look forward to watching Earth 2 come back together.

The artwork, by Jorge Jimenez, is solid. There are some eye catching splash pages and I liked some of the new designs for several of the heroes. Jimenez handles the action sequences with Batman very well and there is a lot of kinetic energy in his layouts and panels. Jimenez conveys the motion of Batman very well as he fights some thugs, and the movements of the heroes are very fluid and natural. He also handles the world building aspect of the issue well, because Earth 2 means a big cast and Earth 2: Society means rebuilding a planet. The huge crowds of characters and “big” moments are well crafted and Jimenez has the talent to make this series well known for great artwork. His work reminds me of Nicola Scott’s, further driving home the feeling that this issue is reminiscent of the early days of Earth 2.

Earth 2: Society #1 gets the series off to a solid start that has me very intrigued to read more. Some of the spirit of the first arcs of Earth 2 has been rekindled, and this book is definitely at its best when worlds are being built rather than destroyed. Wilson and Jimenez are going to be a good team to take on this challenge if this issue is any indication, and I’m definitely in for a few more issues.