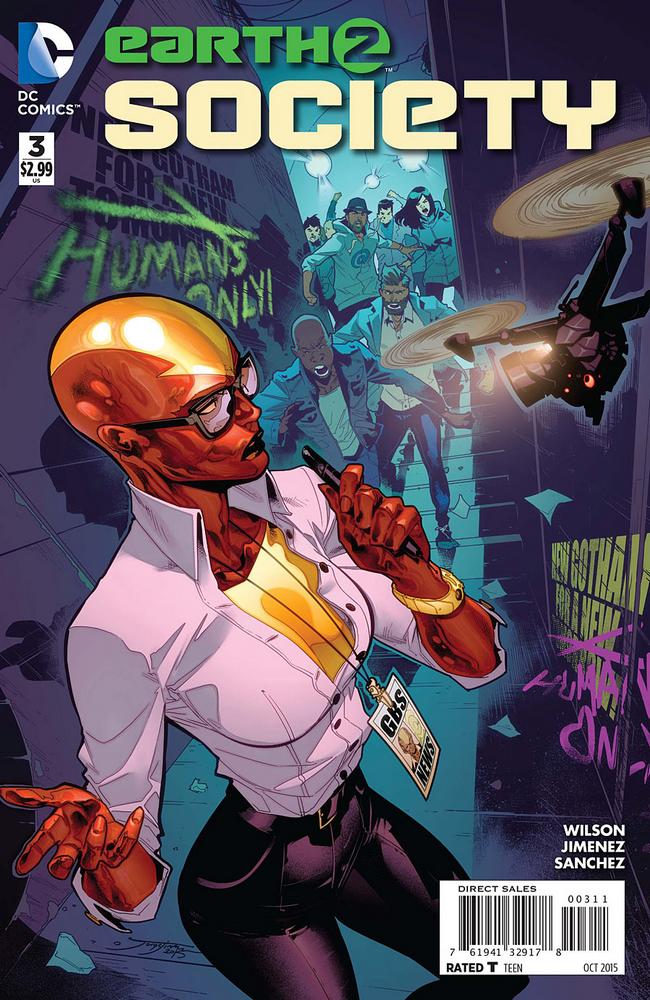 It’s been a year since planetfall, and this new world is no longer new enough not to have a bit of drama. Cities are rising. Terry Sloane is on the run. The heroes are at each other’s throats. And at the center of it all, Lois Lane is presented with a mystery that might even give her pause. Welcome back to Earth 2.

After eight months of carnage and dishevelment, both in the pages and in the process of creating the pages, Earth 2 has returned to some semblance of stability. A world without external threats. A creative team with one writer and one penciller. Both scenarios very welcome indeed.

As a result of the destruction that ran across the book during Earth 2: World’s End, however, the characters and the planet itself needs a bit of a rebuild. And it is this process that we’re witnessing continue in issue #3. Daniel H. Wilson is, to be fair, taking great care in developing the character moments alongside the action, perhaps even weighting the former over the latter. Quite honestly, this has always been the motif for the book prior to his arrival, so its return is certainly welcome.

The only difference with the new series is that there’s so much status quo change — a new planet, a year’s time jump, heroes relationships and personalities torn apart — that it’s difficult to place these characters in their proper context. If issue #1 was Dick (Batman) Grayson’s spotlight, and #2 Welsey (Sandman) Dodds’s, then certainly we are looking at Lois (Red Tornado) Lane’s moment in the sun with issue #3.

Which is simultaneously great and disappointing. Wilson does a fair job with Lois’s persona in this vignette, giving her the appropriate compassion and inquisitive nature that the character has always been known for. She seems a little less determined that I would expect out of the ever-firebrand that championed across Metropolis of old, but I suppose being ostracized from the human race might do that to you.

The reality is, though, I feel like with this set-up, of one-issue focuses, that our time with Lois may be over before it’s even begun. Without spoiling the ending, it’s safe to say I can see the Red Tornado taking full leadership of the “team” and its mission going forward, but I wonder. I wonder whether she’ll just move to the background as Grayson has.

It’s clearly a struggle to juggle the many characters that infuse this book and give it the planet-sized scope it requires. In the past, creative teams definitely prioritized packs of characters over others, but in more of an ensemble sense that led to a stronger continuity across issues. So far, and without a greater sense of the political scope of the planet, Lois and the others just feel lost. And no amount of spare clothing or spectacles is going to make them fit in.

As I said, Jimenez as a solo artist here is a very welcome change, and for the most part, his style, while exaggerated, gives the book a very fun, energetic feel. His women are sadly a bit more “brokeback” than I’d like — particularly Hawkgirl in one really dramatic pose — but his men are not too much more realistic in their proportion either. What little action peppers the book, however, is done powerfully, and for an artist who’s clearly aiming for stretching reality, backgrounds are nicely detailed and crisp.

The emotions in the character’s faces, particularly Lois’s, just aren’t there, though. And yes, the Red Tornado is an android. But previous series artists have pushed the limits and shown her body to be much more human in range of motion than some instances of the character throughout DC Comics history. I wish we were getting more of that here. Because not surprisingly, Lois Lane has become my favorite character of this series, nearly from her introduction, and the potential for both written and illustrated greatness for this iteration is strong.

A book that I’m still on the fence about, but leaning toward satisfaction, Earth 2: Society is perhaps a slow build or a bit of a jumble, but it won’t be clear which until a few more issues in. I’m willing to hang tight and keep reading, if only to visit with some of my favorite characters and cheer for their survival.