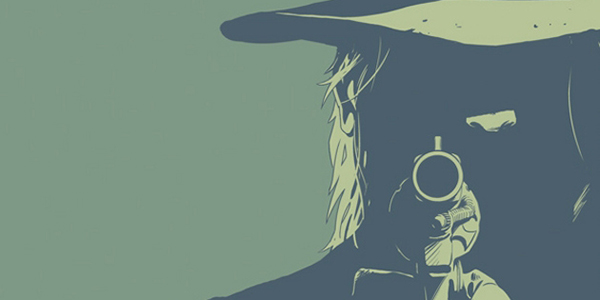 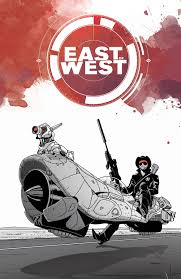 Issue ones have to be the hardest thing in comics, even more so when the first page of issue #1 is the true introduction to the world. Every aspect of what makes a comic great must also be balanced with a steady flow of information and back story to begin to put together the base. Hickman does not disappoint and has put together the best issue one of this young year so far. While a simple tale of revenge rises to the top, just below every page turn reveals a complex story with a rich history and characters.  East of West does not take the phrase ‘alternate reality’ lightly. The main plot may be focused in the year 2064, but the world has been reshaped since the 1860’s and little details are scattered in every page and panel to reinforce how much thought and creativity went into making this new take on the United States.  At no point was the story overwhelming and it was wonderfully layered to be enjoyed for a quick fix or obsessively scanned panel by panel.

It’s the simple, yet powerful imagery that makes the issue as strong as it is. The ‘rebirth’ scene featured a few panels which could have been taken out the book and put out of context and still told a story. The introduction of how the alternate version of the United States is shaped could have also gone over a few readers heads, but the perfectly placed panel of the leaders signing the agreement packed so much into so little and brought it all together. The art should be able to effectively tell the story without any dialogue or narrative, and East of West exceeds in visual storytelling.

The second half of the book eases on the world-building to focus on the main characters.  One-fourth of the horsemen — Death, the gun slingin’ main character in this Sci-fi western — is hungry for revenge and isn’t taking prisoners. His introduction with his posse in the bar is currently my favorite scene of this year until something can (not likely) beat it. The perspective that it was presented, especially the ‘fight’ scene, put a completely different feel to the whole scene and upped the tension wonderfully. The dialogue is quick and to the point, but helped keep the tempo of the comic. There was never a dull moment between the characters, and every interaction felt like it was showing a new mystery or hint into their very shrouded pasts.

Not many comics can do what East of West did. A genre bending, character-driven story about the apocalypse sounds nigh impossible, but Hickman and Dragotta pull it off. To create a perfect single issue, the comic must be able to tell a self-contained story and also create a bigger picture that makes the wait until next month excruciating. East of West does exactly that.