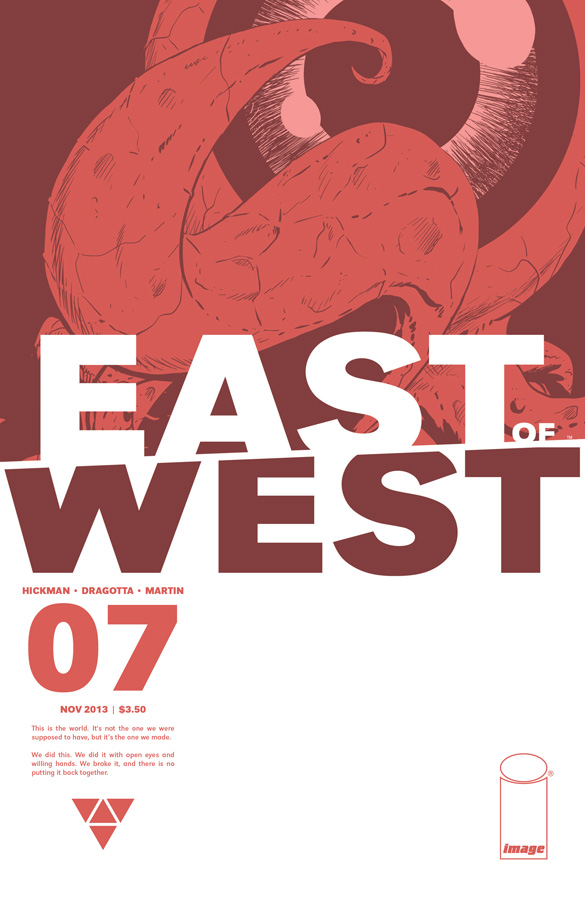 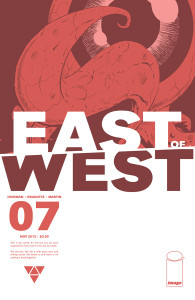 Every month, a new issue of East of West comes out, and every month I want to reread all of it from the beginning to dig for clues. Jonathan Hickman is really taking his time with the mythology of this universe, letting it share space with the action and violence. Every so often we get to see the myth deepen as another little corner is unfolded, like some really complex piece of origami. This issue was a wonder piece of literal world-building, and challenged a lot of my assumptions about many of the characters’ roles.

Before we get to the core of the issue — which is the story of Ezra Orion, the Keeper of the Message — we see Death go to a mountain lake, seeking “The Lady”. It’s interesting how magic is getting layered into this story along with the preexisting sci-fi and western elements. Side note: did anyone else hear the sound of The Cave of Wonders from Aladdin in their head when the Old Man spoke? I hope the story gets back around to Death soon; I feel he’s been out of the spotlight for long enough.

The Horsemen, meanwhile, are trying to figure out what to do with Ezra, who has merged with a beast from the Pit (as seen last issue!) and is suffering in a horrible way. Cheers to Hickman for throwing in the dirtiest Latin swear I know to set the mood. We learn Ezra’s story, which is tied tightly with that of Armistice. I’m not sure I understand why, but apparently the Horsemen have always slaughtered the many pilgrims who have come to Armistice over the years, claiming faith to the Message. Conquest spares Ezra and he devotes his entire existence to becoming “an Agent of the End Times.” Ezra fills a dual role of prophet and prophecy, which really sucks for him. There are so many layers of symbolism at play here, I can’t keep them all straight. It’s times like this I really miss living with a religion major.

I love-love-love what Nick Dragotta does with the flashbacks in East of West. The colors are brighter and the pictures hazier, and every time he uses the technique it’s like reading the book through an old filter. It’s such a great way to set the past apart from the sharp lines and bleak colors of the present. He does a lot with shapes and geometry this issue. The story places a certain weight on the shapes of places and things that have importance to the Message. I’m not sure I remember the End Times being covered in Donald Duck in Mathmagic Land, though that was the time before deleted scenes. I’ll have to assume that was going to be in the sequel.

One of the things this issue did better than some of the others was show how bound even god-like characters seem to be to the Message, either out of devotion or obligation. Only Death seems not to care what’s expected of him. So how inevitable is the inevitable? How much is plan and how much is faith? At this stage, there might not even be a difference.