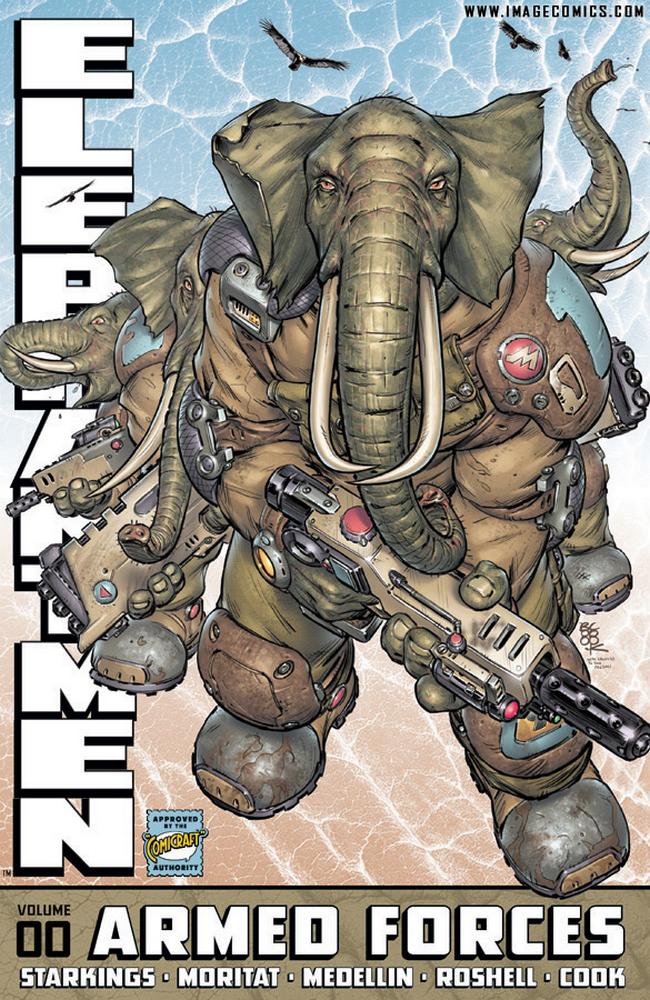 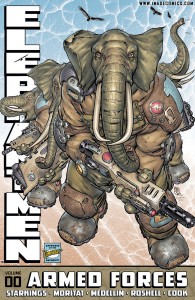 They say that there are no real winners in war, but the existence of Elephantmen has to be considered a victory. War has provided the rich backdrop to a series that never extols the virtues of war, but always shows the horrors from all sides of the political spectrum. The biggest difference is that some of the soldiers in this war are elephants, hippos, and rhinos. Elephantmen is an in depth study of the relationship developed during conflict, and this book is specifically about how heroes are made; add in elements of science fiction, and you have one of the most intriguing books being done today.

Richard Starkings’ writing surprised me with its depth. The lettering in this book is (of course) superb, but the story is the real stand-out element. These stories comprise the introduction of the character Yvette, the human freedom fighter. One of the differences between Elephantmen and other war stories is the empathy that you, as a reader, feel for the characters in the story. Every side has its flaws, and neither point of view is as black and white as it originally appears. The story works best when it is attempting to illustrate the effects of war upon each side in the conflict. Starkings is able to maintain many different times and places, and still pull together a cohesive vision of his story.

Despite the different art talent involved in this book, they all utilize a similar style. There is a consistency to Elephantmen which allows this compilation to not feel disjointed with the different styles of art. Moritat was the first artist on the series, and really developed the final look of the Elephantmen. There are some iconic pages in this book, and the covers are worth the price of admission alone. Near the end of the trade is a sketchbook which is “narrated” by Richard Starkings, and it gives much insight into the different artists, and what each bring to the book.

Armed Forces #0 is a perfect introduction to the world of the Elephantmen. I didn’t know what to expect out of this series, whether it would be another action-adventure throwaway or not, but this is a perfect example of someone who knows comic books inside and out, doing something that means a great deal to them. This is a book that I am happy to recommend to everyone. I hope the story of the Elephantmen is continued to be heard, no matter how much they try and cover their ears…