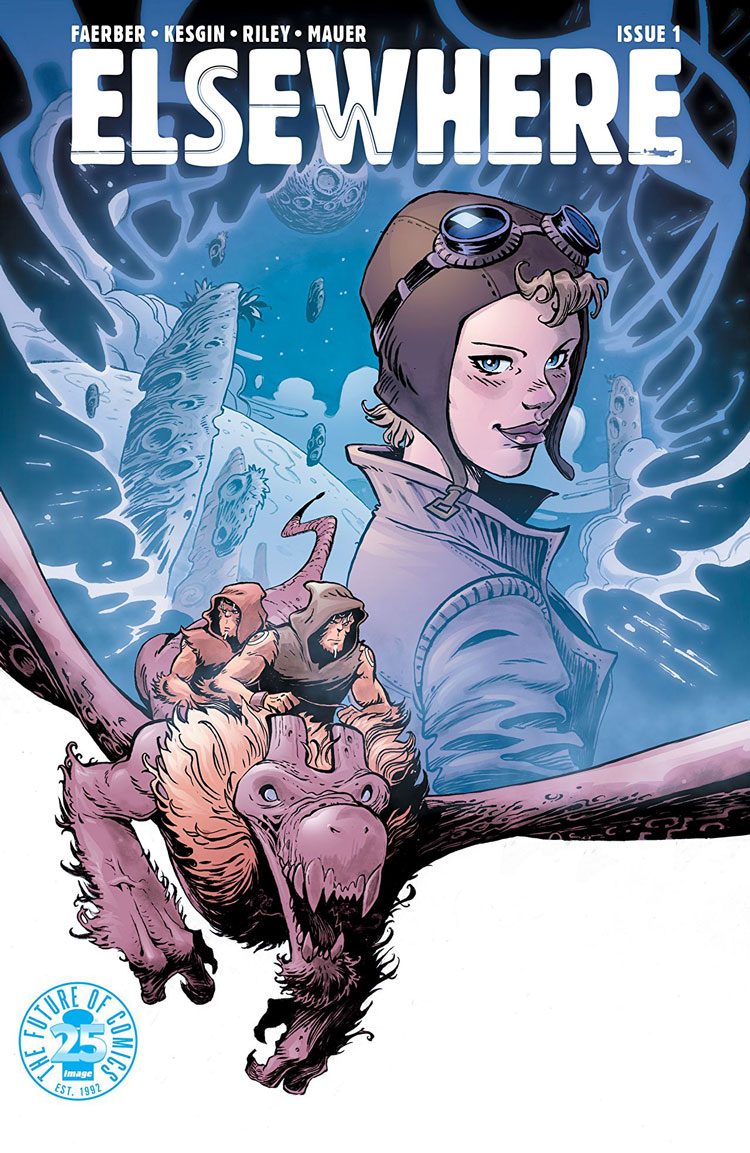 I’m not sure where my fascination with Amelia Earhart stems from – perhaps Amy Adams’ portrayal of Earhart in second Night at the Museum movie, or maybe Autumn Reeser’s gung-ho, rough-and-ready vocalization of the famed femme pilot in the “Amelia Earhart: Fearless Flyer” segment of The Thrilling Adventure Hour – but Amelia Earhart has a quick path to capturing my attention. Put her in a comic and roll a plus-ten. Add a writer I dig and we’re at a near-lock for me to at least read the thing.

Elsewhere #1 gets that plus-ten roll and ups the ante by letting writer Jay Faerber tell his tale. A co-creation with artist Sumeyye Kesgin, Elsewhere #1 transports the reader to a faraway realm where dragons are called steeds, skies are purple and islands float in the sky, chained to the world below. There is no indication of looking back, and with Earhart as our guide, it seems the best thing to do is power forward, embracing the adventure that awaits.

Earhart isn’t alone on this world with dragons. She meets Cort and Tavel, learns that they’re part of a rebellion against Lord Kragen, who rules the world of Korvath through tyranny and oppression. In twenty-four pages of story, Faerber and Kesgin show us a world ready to be explored and give us more than enough depth to the oddly-matched trio to elicit reader interest. I believe Cort and Tavel’s tale, I stand with Earhart, and I want to know more.

As a writer, Faerber got my attention with a run on the Titans for DC in the early 2000s. He got my support as a reader and a fan with Dynamo 5, a series he developed for Image with an artist who has undoubtedly made his own name from that initial opportunity – Mahmud Asrar. That’s not to mention any of his other work for Image or any other publisher (click the Jay Faerber tag to the left of this review to find out for yourself).

With Elsewhere #1, Faerber blends the humanity readers expect from the Titans and Dynamo 5 with the fantastic and new. Yet it all feels relatable and comfortable. Yes, Cort and Tavel are visibly different than Amelia, but their plight is real, their story is starting, and their contribution to Elsewhere #1 is absolutely necessary. They’re as much our gateway as Earhart.

Kesgin, for her part, is an extraordinary match for this title. According to the text page following the story in Elsewhere #1, Kesgin is responsible for sparking the idea from Faerber as he is for writing it. As such, she shares creator credit, as she should. Her style is a wondrous blend of Evan Shaner, Mahmud Asrar, and Rafael Albuquerque. She uses thicker lines and richer shadows (as prescribed by the tale), but has a keen sense of page and panel layout.

With new series, artists are faced with the challenge of making all of the characters immediately recognizable and memorable, and Kesgin does so in Elsewhere #1. Cort is distinctive from Tavel, Kragen’s forces are identifiable from Cort and Tavel, and Earhart is a determined spitfire from her first panel.

Kesgin’s cinematic compositions sweep the reader through Elsewhere #1, with panels inset within others, characters breaching panel borders, and detail being as much implied as explicit. Cort and Tavel display as wide a range of reactions as Earhart does, but the fugitives have an underlying appearance of mischief or threat to them that may or may not be legitimate. Every panel Kesgin crafts is finely honed, and colorist Ron Riley adds depth and climate to the drawings.

Riley’s base color seems to be purple, which carries along inherent fantastical qualities. He liberally uses cooler secondary and tertiary colors throughout Elsewhere #1, using the shadowy elements of those tones to augment the fugitive aspect of the tale, even on the sweeping landscapes.

Earhart is less shadowy, pale-skinned, with an amazing array of browns, grays, and tans comprising her outfit, as would fit the attire of an aviator. Riley, following Kesgin’s lead, provides visual indicators to the cast of characters assembled in Elsewhere #1. Cort’s tunic is more vibrant than Tavel’s, and there is a very subtle difference in the two characters’ skin tone.

Letterer Thomas Mauer keeps everything familiar and comfortable, like Faerber’s story. Despite the presence of alien beings, there is no variation in dialog. Cort’s word balloons flow like Earhart’s, which are indifferent from Lord Kragen’s. That plays into the tale of Elsewhere, but doesn’t shortchange the story in any regard.

Elsewhere #1 was on my radar from the original solicit, and this issue does not disappoint. While I trend towards superheroics in my comic choices, titles like this make for a nice alternative, giving me a chance to explore new worlds with fun, familiar characters while celebrating the array of possibility comic books allow.

Faerber, Kesgin, Riley, and Mauer bring their very best to this issue, and it really shows. This is a labor of love that has expanded to fill their imaginations, and they’re doing a great job sharing that vision. I thoroughly enjoyed this issue, and I look forward to more. Give it a spin, see what you think.