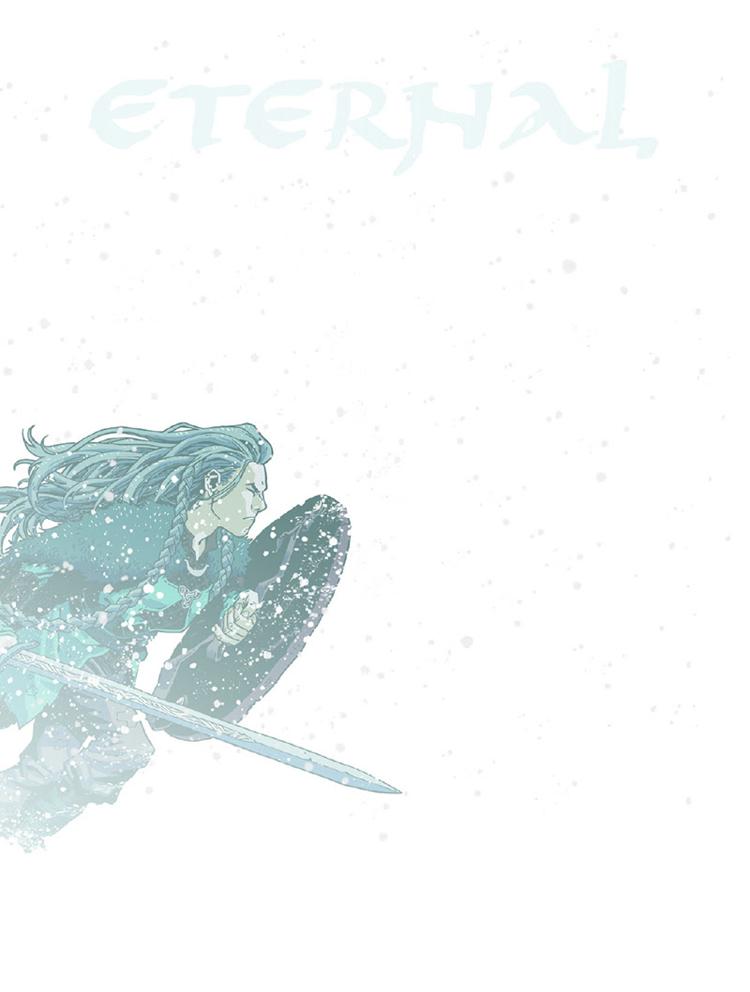 Eternal is a masterpiece. It is like a cup of specialty coffee. It can be enjoyed just as another great experience but if you savor it and spend some time with it you will discover intricacies and craft work that take it to another level. Starting with the inside cover plates it is immediately discernible that this will be something special. Eternal is a unique confluence of creative talent that has produced a storytelling experience that is unlike many others. The reader is immersed in another time and place and carried along willingly until the very last shocking panel. This is accomplished because of the perfect pairing of writer, artist, and colorist.

Ryan K. Lindsay and Eric Zawadzki have handcrafted a story that is worthy of being used for operatic tales, much the same as The Saga of the Volsungs inspired the Ring of the Nibelung. One of the key reasons that this story has come out so perfect is that Lindsay wrote this story with artist Edward Zawadzki in mind. When a writer knows an artist well enough to write for them in particular and to truly collaborate with them the story is always going to be ten times better. From there Zawadzki imputed his own ideas and helped form the story into its final shape. It’s this back and forth between artists that really make a project become more than the individual pieces. To use a dated analogy: it’s like Decker merging with Ilyia to help V’ger evolve.

One of the unique parts of this story is the focus on the shield maidens. The typical Viking story is of men pillaging their way to glory with little focus on women warriors. Though there has been some back and forth among anthropologists about women’s specific role in their society there is at least some evidence of women participating in battle and gravesites of women buried with knives and spears at their side. We do know that women had a very strong understanding and role in protecting the lineage of their family. Both of these facts play a very important part in Lindsey’s story. The events of the story both before the opening and what happens during it drives the main character, Vif, to act passionately in her response to attacks on her village and family. She is portrayed as being more than a victory driven battle maiden as Lindsay always weaves in her motherly side in tender moments with her son. These moments show how closely the threat of death hangs around everyday life for this group of women.

Structurally the story immediately drops us into the action with the scenes of intense battle which is dispersed throughout the rest of the story until the very end. This continuously builds up the tension of the story to the point at the end when the release is the biggest payoff. The tension is symbolically and literally cut in half with a sword ending the story with one deft swing. This constant presence of tension is symbolized by the double-edged intricately etched sword that is called back to many times throughout the book. As a weapon the sword was of great importance to the Vikings as well as to this story. Without this particular sword the story would not have the weight it does. It symbolizes both the lineage, wealth, and power of this particular family. A typical Viking sword would have cost the equivalent of 16 milk cows and would have been passed down from father to son. It is present from the beginning to the very end of the story and becomes itself eternal. The story is also particularly important to women readers and not just because the main characters are women. In the Viking society women had many more social freedoms and rights than other women of the same era. As mentioned previously they also had a strong fealty to family legacy. Vif in particular in this story has plans to not only protect her family and her village but also create a safe haven to empower other women. She is not just focused on vengeance but can see beyond to a better time and place for women to flourish and be powerful.

The artwork of Eternal is hands down amazing. It pulls you into the story and effectively immerses in this cold frostbitten world of the Viking shield maidens. The opening pattern of stones and swords littered about everywhere puts the reader in the frame of mind that a great battle that has just taken place. As well as being beautifully created by designer Courtney Menard it also sets up a pre-history for the story. From there we are greeted with the beautiful repose of a winter white out. Zawadzki makes use of negative space better than is usually done in comics these days. Stories usually rush the reader through at a NOS driven pace to keep the hold their attention. While this does work there is something to be said for moments of quiet reflection. In the Biblical book of Psalms the use of the word Selah during a song was a musical pause that was the equivalent of “stop and listen.” This similar technique is used a number of times throughout Eternal. Typically the pages are without characters or dialogue and sometimes completely blank. This occurs with a snowstorm whiteout at the very beginning, pages of complete black about halfway through, and at the very end of the story in the nebulous place in which it ends. These pauses occur after or just before powerful moments. It is sort of a palate cleanser for what comes next.

Probably the most impressive part of Eternal is Zawadzki’s use of sequential panels to create a feeling of animation. There is an important fight sequence that is weaved in and out during the entire run of the story. Each time a different set of actions are shown and each time the reader can clearly see the characters move, clash, and die. By doing this Zawadzki is showing, not telling us, that Vif is an amazing warrior. If we were told this then we would accept it but by showing us just how good she is, we become a part of this story and keep Vif alive in legend as we tell others. We see just how good she is in her parries, blocks, and attacks. It’s got to be the best swordplay portrayed in a comic book to date and definitely one of the greatest fight scenes overall. This creates an authenticity both for the story and Vif as a character. Also creating a realistic feeling for the story is the attention to detail found throughout the artwork. Vif’s hair and braids, the design work on the sword, the costumes, and Viking architecture all display a hand crafted quality to them and rich in detail. The details inject a beauty into a story that at times is dark and deadly.

Dee Cunniffe’s colors soak the characters and settings in life. As any successful colorist should do Cunniffe sets the moods in Eternal beautifully with his expert choice of color palettes. For battle scenes we find deep blood red single tones, for quiet moments soft pure whites and pastels, and for otherworldly moments we get mystical blues and foggy mint greens. Overall the colors are very cold and somber and easily gives the reader a feeling that this all takes place in the frozen lands of the Scandinavia. Even during the changes of season there is still the overall feel of a bone deep cold that never quite goes away. The light colors used throughout also do a very important thing. When blood is spilt it contrasts to the rest of the scene and draws the reader’s attention to it immediately. Another advantage of using such pale colors throughout is when there are rare scenes with warm colors. These are usually in scenes with fire or a sunset, they stand out so much more and radiate the warmth that the actual source of light would. This works beautifully in the book for a funeral pyre. There are pages of blackness that give the reader’s eyes pause and then a beautiful, warm, blaze erupts from the blackness. It is a profound scene and the artistic skill necessary to build up to and successfully fulfill the moment is evident. One of the most beautiful scenes in the book falls toward the end and is a view of the cool foggy woods. The use of single tones gives the scene so much depth and a type of serenity one might find in the afterlife. An interesting question to examine is do the colors of one scene tie-into and give hints about another? There is a particular color that is used for the atmosphere at the end of the book that is used as well for the atmosphere of certain scenes at the beginning. Could there be more here than just what we might think on first glance?

Overall Eternal is a must read and must have for any comic book lover. It provides an experience that is deeper than just a one time read through. The creators have crafted a story experience that is tangible on multiple levels and enjoyable as well. It will be a book that the reader will be able to enjoy for a lifetime.