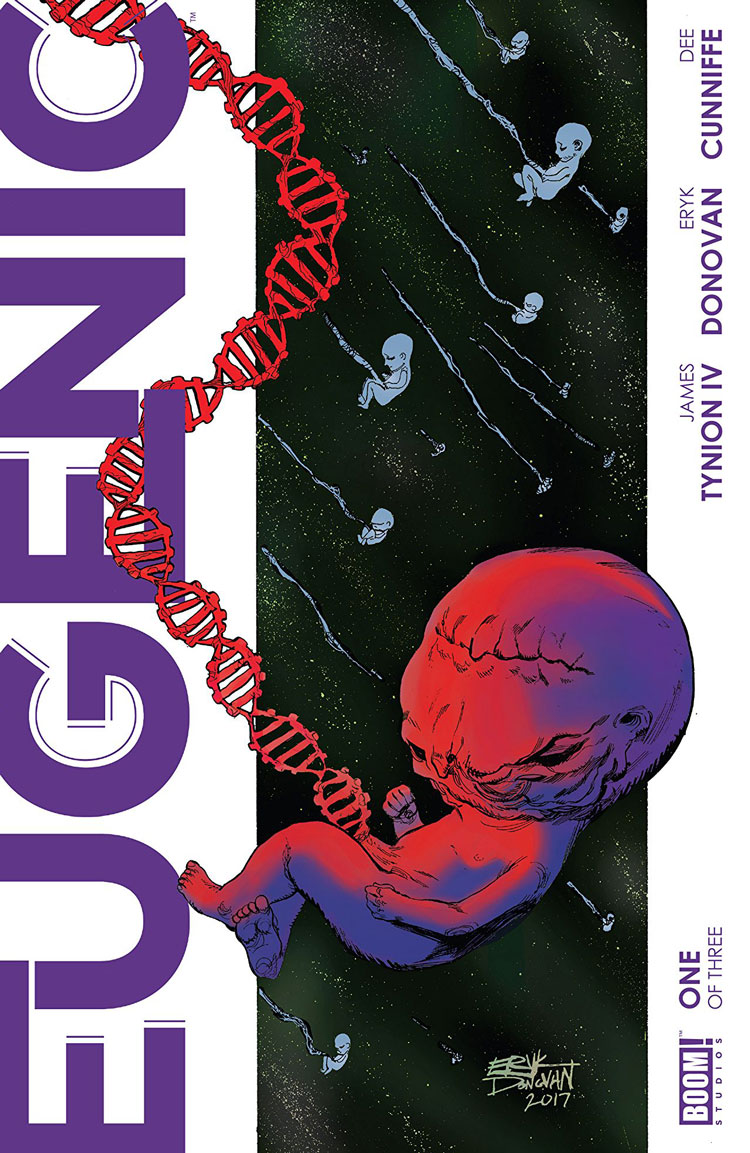 James Tynion IV and Eryk Donovan begin to close out their Apocalyptic Trilogy with one last look at how the world we know ends… and it’s maybe the least fantastical depiction yet.

That’s not meant to be comforting, if you were wondering.

It’s 2022 and a bad flu starts going around. Fast-forward a few years and 60% of the human race has caught it. Over 700,000,000 people die. It could have been billions. But we were saved. By a pharmaceutical company that mass-produced the cure at cost for the benefit of the entire globe.

But there’s always a catch.

To say what Tynion and Donovan have crafted here is chilling would be a crass understatement. And that’s well beyond the idea that 10% of the Earth’s population dies of what seems like nothing more than a very bad influenza virus, with another 50% infected. History has seen great epidemics. The bubonic plague wiped out anywhere between 25% and 60% of the population of Europe in the 14th century. By comparison, over 35,000,000 individuals have died of AIDS-related illnesses since the start of the epidemic.

Then make it worse.

It’s a testament to Tynion’s deft writing that he could make an antagonist like Cyrus Crane so understandable amid the morally repugnant course of action he takes to ensure the survival of… well, not humanity exactly. Extend that into developing Crane as probably the first gay villain I didn’t wrinkle my nose at while reading, and you have a real accomplishment.

Of course, Tynion is no stranger to developing well-rounded, deeply intriguing and empathetic queer protagonists from scratch, be it in both of the other two installments of the Apocalyptic Trilogy (Memetic and Cognetic) or series like The Woods or The Backstagers. But in this case, far from being the stereotypical moustache-twirling (and waxing) homosexual menace looking for revenge against a society that spurned or hurt him, Doctor Cyrus Crane is methodical, vastly intelligent, genuinely charitable, and devoted to saving the world from the evils that those before him crafted onto the world.

And it’s the worst sin of all.

It’s not just pride that drives Crane to the unthinkable — to reshape the world’s population through DNA manipulation in order to wipe out differences in race, sexuality, gender identity, or ableness — but the kind of privilege that we see every single day in the most deceptively well-meaning of “allies,” magnified times one million.

Crane is every white man who takes it upon himself to speak on behalf of people of color, rather than help elevate their voices and direct concerns. He’s every cisgender man who expects feminism to make space for his work, rather than allow feminism enter his environment and transform it accordingly. And while ostensibly marginalized himself as a gay man, he weaponizes the privilege of his class, physical and intellectual ableness, education, whiteness, maleness, and cisgender identity to decide what’s best for the world unilaterally, leaning into eugenic theory designed to wipe out difference.

What Tynion has introduced in Crane is the future maybe some liberals want. And that is the most frightening thing of all.

Whereas most eugenic attempts over the course of the last century have been designed with the idea of elevating the artificial conception of whiteness as default — most notably in the mass eradication of so-called inferior races by the Nazis in World War II and the subsequent adherence by modern white supremacists with their anti-“globalist” (read: Jew) and anti-Black and Islamic rhetoric — Tynion’s reconception of the discipline is actually far more insidious. This is arguably a “progressive” ally looking to eliminate those same ills that embraced eugenics by retooling eugenics for his own purposes.

This is not nearly as far-fetched as a practice as you might imagine. We see the same thing in different form with the liberal villainization of sex work itself rather than efforts to improve or eradicate the conditions under which it endangers its participants or is economically necessary, for one. On the surface, it looks and feels like a progressive stance. It is not. It dehumanizes in opposing, but equally treacherous, ways as those who seek to manipulate sex workers for their own economic benefit.

Utopia is not a world where we are all the same, white or not. Utopia, if such a thing were possible, is a world where difference is not subject to oppression, no matter what its form. To work for the former is a betrayal to the very ideals true progressives should work toward.

And so lies this very compelling narrative from the most perfect of antagonists that’s probably going to give me nightmares this very night. Donovan’s linework is most assuredly helping that along, as his perchance for making the most banal scenes just a little bit nervous opens into the truly grotesque by the time the issue reaches its climax.

Forget deformed babies, which Donovan is clever enough to obscure until the very dramatic moment of birth, despite the repeated use of amniocentesis imagery. When faces begin to melt on the only brain trust that could possibly undo Crane’s worldwide eugenic masterpiece, it’s damn clear the right artist is telling the right story at the right time. And it feels even more shocking in contrast to the relatively warm glow of Cunniffe’s palette, with its comforting pinks and cool soothing shades of indigo. This is all supposed to feel like the healing embrace of a health care provider, until the glasses start to slide down an eviscerated face with skin dripping into pools.

If anything, I’m frightened about one thing: this is merely Act One for Eugenic. With Act Two and Three to follow, each paced out 200 years into the previous chapter’s future, I wonder: despite its disgusting rationale and means, did Tynion and Donovan’s villain achieve the peace the planet so desperately wants? And if it hasn’t, how much more of a tragedy will that be, truthfully?