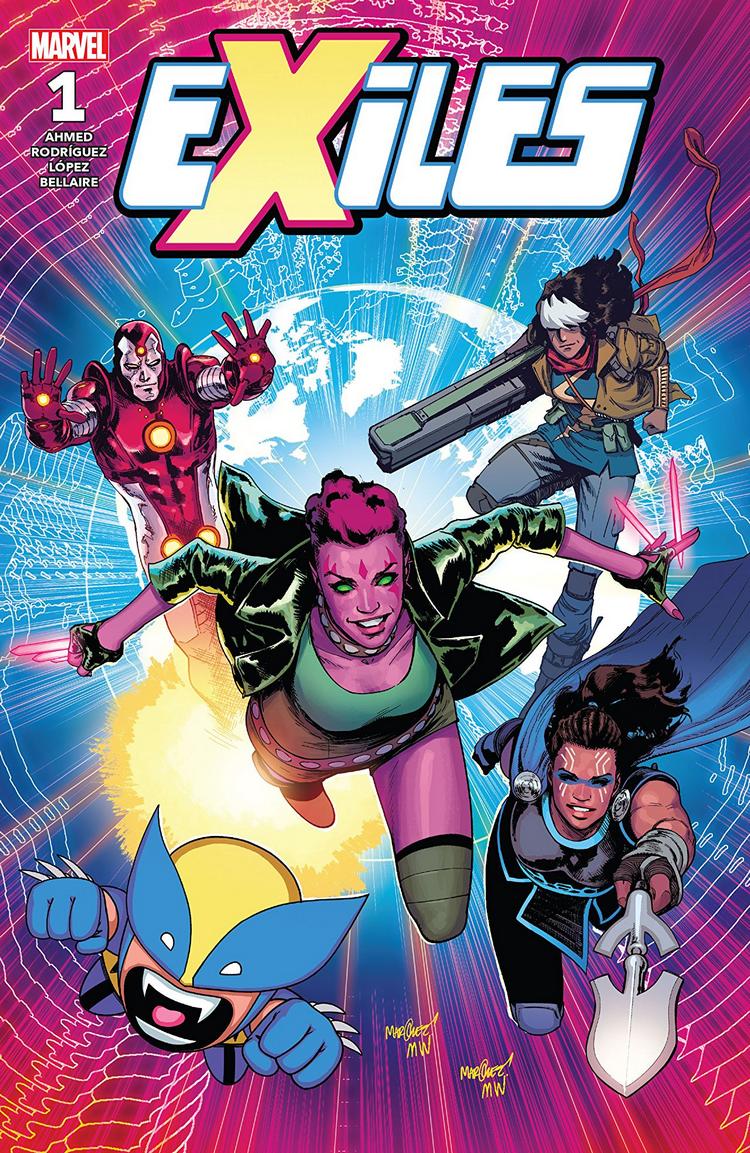 The Marvel Multiverse is in danger (again) and a new team of superheroes must come together to save it despite their initial hesitations (again). This is the basic premise the first issue of the new Exiles comic, which started this week. This issue gets part of the team together through a series of reality jumps from The Tallus. So far, we have three characters on the team: X-Man Clarice Ferguson (Blink), Khan (an alternate-universe version of Kamala Khan), and Nate Richards (Iron Lad). Over the years at Marvel, many teams have come together in many dire circumstances. So, how does this first issue measure up?

I haven’t yet read the previous Exiles series, but I’ve often heard enthusiastic reviews from people whose commentary I appreciate. I decided to read this book partly on those recommendations and partly based on the team lineup. I’m glad I did; despite Marvel’s recent copious missteps, it’s nice to be reminded that there are still certain stories being published that can cause a fan to become fascinated by the world and the stories being told within it. This issue starts off in a way that will be incredibly familiar for fans who have read Marvel events or crossover stories regarding the danger to the Multiverse. I distinctly remember something along these lines happening not too long ago – in several books, no less. However, the story very quickly becomes intriguing as we meet the cast who will become the new team of Exiles. Heading the team is Blink, who has the familiar superhero stoicism and willingness to jump into an adventure that shows up, especially if it means saving the Multiverse. As she recruits the second and third members of the team, we already have hero archetypes showing up: the leader who has to motivate others to join the cause; the tough cynical action-hero character who’s clearly seen some horrible times and is trying to protect their people; the teenager from a whole other superhero story with a complicated backstory.

The writing in this book has to do a difficult job of introducing these characters from totally different universes and make their interactions believable and interesting. Ahmed manages to pull this off well. The writing reminded me yet again that the current generation of Big 2 comics writers have to balance the act of writing towards a broad audience with a varying amount of existing knowledge about Marvel stories. Each of the characters, though only briefly introduced, tell us enough about themselves through their dialogue and actions with the other characters that we can see some developing team dynamics that will be interesting to watch. Though the initial scenario seems typical or predictable, the way these characters respond to the situation makes me excited to read the story. One of my favorite parts of the story was an interaction between Blink and Iron Lad, as we see some of what readers like me love about superheroes: even when the fate Multiverse hangs in the balance, there’s time for heroes to hold each other accountable, too. The artwork effectively conveys the reality jumping by showing the reader details of the other worlds, even when they show up for only a few pages. The artwork is bright and exciting, with both double-page spreads and scene transitions done in interesting ways. Backgrounds are often among my favorite parts of artwork, and there’s so much here to look at here, from the people Khan is protecting in the Jersey City of her world to the wide cityscape in Iron Lad’s world. I’m not sure how much of this might be familiar to fans who’ve read other similar reality-jumping series, but they were new and interesting to me in ways that I’m guessing might also be true for fans who are reading such a series for the first time. Altogether, the Marvel Multiverse feels lived-in, in a way that couldn’t always be said with previous series that created the Multiverse these characters now seek to save. The creative team uses many of the usual superhero story conventions but uses them well and to good effect.

This cast in this story is an interesting team, and I admit I’m partial because I already either liked or was curious about several of the characters. Though I’m not familiar with Blink, being a fan of the X-Men, I’ve heard of her and have wanted to read more. I’m a huge fan of Kamala Khan, and it was a strange yet interesting experience to read this older and different-yet-familiar version of her. Young Avengers was the comic that got me into reading superhero comics, and so seeing Iron Lad on the team was a welcome surprise. Based on the announcements we’ve seen regarding this book, we can expect Valkyrie and Wolvie to join the team sometime in the near future, which promises to make a fascinating and probably-hilarious group. Exiles seems like the kind of series which, due to its nature, is going to combine characters from different stories and readers might know only some or none of the characters’ backstories prior to jumping into this book. Whether, and the extent to which, those backstories will become relevant later remains to be seen. These characters are an interesting example of new but experienced, as several of them are part of Marvel’s newer younger generation of superheroes, but still aren’t so new that they are altogether surprised at the prospect of having a strange adventure ahead of them. If the Marvel Multiverse seems lived in, this team also feels like a team that’s from a lived-in Multiverse where they expect such ridiculous things as reality jumps via magical bracelet to happen.

Exiles #1 was an enjoyable read. I was a bit confused regarding why this issue wasn’t longer, as many introductory chapters often are, because it would have offered more time to set the stage before the last-page reveal. In any case, there was enough here that combined the old and the new, the personal and the epic, the familiar and the weird in ways that inspire curiosity regarding future issues.