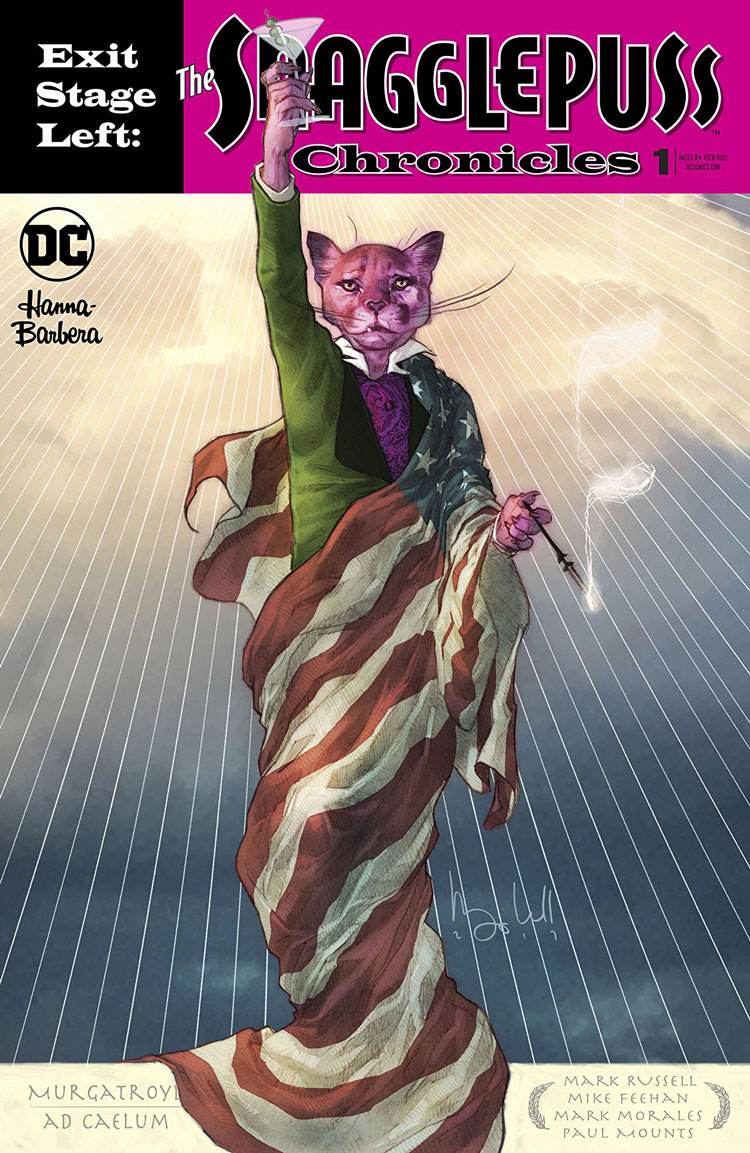 It’s only a night-light.

Meet Snagglepuss, a successful playwright from Mississippi who has found fame behind the Broadway stage. Things seem fine for him on the surface, but there are things that boil underneath it which could set him at odds with his country. Making sense of the world, his heroes, and his loves is no small task, and he may experience a slight bump as he goes through his life.

I recently had a conversation with some friends about the place of oppression in fiction and that, most of the time, it is not warranted or needed. The Snagglepuss Chronicles is one of the places where the use of marginalization against queer people provides a mirror and commentary to what has happened and, unfortunately, may happen. It’s hard to read this story and not lament American and global history, but it is equally difficult not to fear the same consequences now.

As Pablo says, the idea that this is America and that such things would “never happen here,” is a night-light. The dim glow of a bulb in your bedroom is a false hope of protection, on the level of covering your head with your sheets to protect you from monsters. Yet, as people have pointed out: night-lights only serve to illuminate monsters, not deter them.

Mark Russell is perhaps a bit too real in this first issue of Snagglepuss. There had already been buzz about the story, so I knew about our protagonist’s leanings in love, but the set-up around that is remarkable and saddening all at once. From his marriage to his life in Mississippi as a pink cat who loves plays, Snagglepuss is a character who we’ve seen before but who still feels engaging, all thanks to how Russell has built the story. I like that you have to consider not just what is actively happening, but also where this story takes place in time. Without considering global politics in 1953, this comic reads very differently and does not have near the level of impact.

The characters surrounding Snagglepuss are just as vital as he is. Alice and Henry in particular work as a frame to the story, their intentions to have a night out seemingly innocent. However, we come to find that their date is much more sinister, especially once you see Henry’s glee. The coming battle facing Snagglepuss juxtaposed with these two characters reveals many unsettling truths: death is a spectacle for many, and when you are in the crosshairs some people will gleefully watch you burn.

Pablo is another important fixture, though there are some caveats to him being present. For one, he serves as a mechanism for understanding the politics within the story and foreshadows how they will affect Snagglepuss. On the other hand, the only major person of color is a vehicle for understanding pain, which can be a narrative direction that capitalizes on the pain of those with less privilege.

Russell uses him to bring up an important point, and it makes sense that he would provide the perspective that dashes Snagglepuss’ reverie, but this is also a double-edged sword. In the same way that this comic justifiably addresses queer oppression, it also does something very common with people of color in fiction: makes them the home of pain.

Russell also touches upon important parts of history, including the use of Stonewall as Snagglepuss’ refuge, the bar paying off cops like many did in order to stay safe, and McCarthyism. All of these coalesce into major factors behind the entire story. Some of them are used more directly, while others inform much of the goings-on for our protagonist. With all of these in mind, I wonder what else will emerge from the overall narrative as the series continues.

While the Stonewall riots in particular may not come up, I do hope that there is some recognition of the trans women of color who were a part of the community and who were instrumental in stoking those important flames. Pablo seems to be the only prominent person of color, so hopefully there will be more inclusion in subsequent issues, though in a different vein than how he is presented, especially if trans characters come onto the scene.

My favorite part of Mike Feehan’s pencils is that everything is rendered in a realism that I feel is necessary for the story. Every animal seems as though they are a normal part of everyday living and the visuals are akin to the “idyllic” 50s. Feehan’s style almost makes the underlying politics of the story stronger because everything else that builds from it seems like a slice-of-life story. There is a sort of deception, like watching Leave it to Beaver and seeing the Cleavers as the optimal family while realizing they likely would have been incredibly racist, and it helps to hone in on the fact that on almost every level Snagglepuss’ life is not ideal.

Mark Morales’s inks makes characters feel distinct. Reading through the issue, I felt as though everyone was important. Morales’s talents convey the idea that everyone is a vital piece of the story, almost to the point that, while recognizing Snagglepuss is the protagonist, others around him are a heavy influence on his actions. In a way, he almost seems like someone that things happen to, rather than someone that makes things happen. Morales giving shine to the various characters throughout this story is a big part of that narrative and definitely hits home in the very last panel.

Paul Mounts’ colors are a good fit for evoking the tone of 1950s social elite. Everything is crisp and clear, and clothes especially are cast as vibrant and flashy. This layer of the story presents two worlds: one that is cast as a happy dream and the other that gets closer to reality. Mounts’s work stands out in key scenes, like the Stonewall bar or the execution, by changing the color scheme to warm reds and oranges reminiscent of passion and an ominous muted yellow that is pretty jarring.

The execution scene in particular is made more powerful by Henry’s glee, an element of these pages that stands at odds with not just what is happening, but also how Mounts has made these scene uncomfortable. Using these methods helps to put Snagglepuss at odds with what he shows to the world, whether he is directly involved or certain pages serve as a marker of what is to come.

The Snagglepuss Chronicles is a trip in many senses of that word. There’s a lot to digest and storytelling works through many avenues. Whether what we directly see in writing, pencils, inks, colors, and letters, or the implications of the world that the story is set in, this comic is an incredible combination of history, queerness, and navigating emotional issues of all sorts. I had an inkling of what would be in this comic, but I was met with something far more astounding. While this is not a happy story and I’m not necessarily looking forward to folks coming upon hard knocks, I do think it is one that folks should keep their eye on.