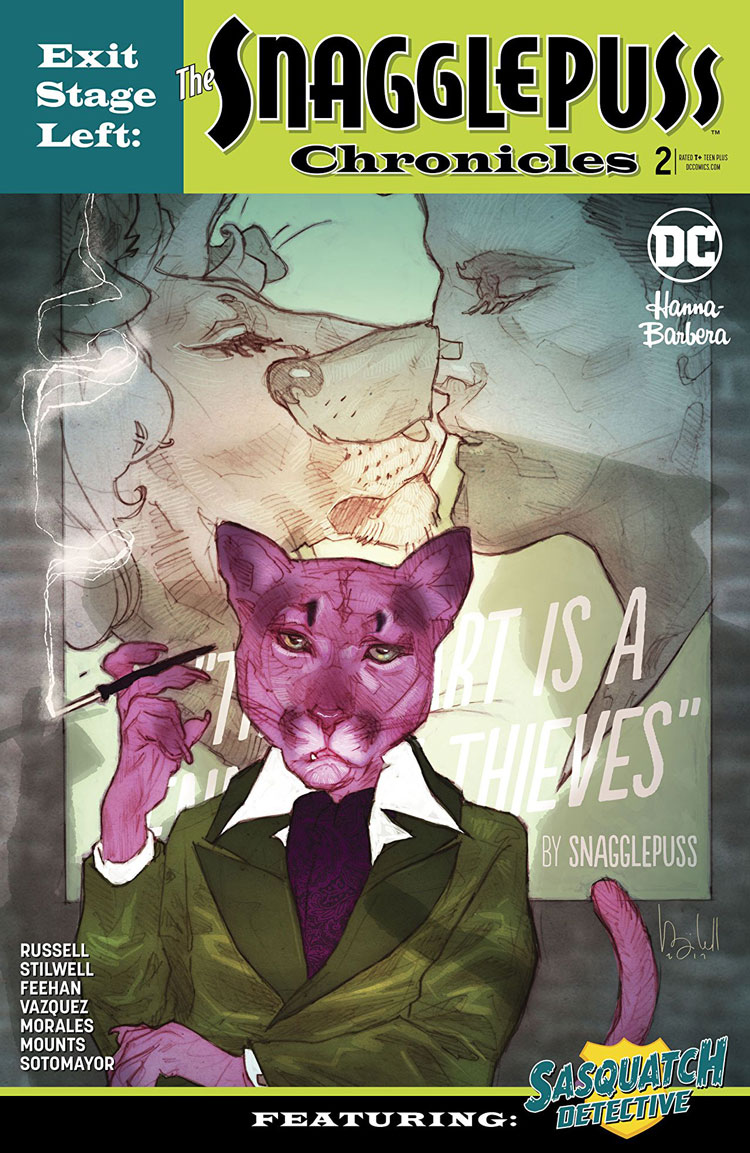 Everywhere he turns, Snagglepuss is facing down a problem. The lead in his latest production isn’t connecting with his character. Huckleberry Hound is in town after a year having gone incommunicado. And Gigi Allen and the House Un-American Activities Committee want him to start writing plays for them. Yikes.

The notion that art should be above politics is, of course, ludicrous. As ludicrous as the idea that all political art is simply propaganda. Comics, like theater, is an art form that can’t help but be political, if for no other reason than it offers a voice to the often voiceless. A medium through which to speak truth that might be too painful (or dangerous) to speak any other way.

To offer Snagglepuss #2 as a primer on how important expression is as a counter balance to oppression is easy. Mark Russell makes it clear that all entertainment is politics (and vice versa, cleverly), and that the very request to strip originality and personal representation is a blatantly political one.

As the big pink lion himself opines, in regard to a governmental request to work for them:

I think what you want is not my help, but my capitulation … You’re not enlisting my help against the Soviets. You’re enlisting the Soviets to help you control what we say and do.

Snagglepuss’s work is political by virtue of his identity, not even explicitly gay in the 1950s (although certainly implicitly), but that of “the other” to Allen’s — and I daresay, the overwhelming culture’s — supposedly default, apolitical center. As Snagglepuss surmises, she is not trying to get someone “like him” to join the center, but to repress any sense of otherness that threatens it at the margins, under the guise of “inspiring and defending America.”

We saw it in the wave of McCarthyism in the 1950s. We see it today in Trumpism. We see it in popular media. And we see it in comics, where bigotry masquerades as wanting to see “diversity done right” and harassment and abuse gets justified as a “culture war.”

But the real feat in Snagglepuss #2 is Russell’s focus on the pain of experience that is so hurtful, so overwhelmingly oppressive, that it can only be expressed through art. It begins as a clear juxtaposition: Huckleberry Hound’s real life drama inspiring Snagglepuss’s drama on stage with his lead actor. But in thinking about the era that these characters inhabit, and the overwhelming repression exerted by silence and shame, it’s much more than one actor mimicking the sad sap life of a broken down man… err, dog.

Russell’s set-up of the Huckleberry Hound flashback and subsequent confrontation on the pier illuminated something profound for me in retrospect. There is a loneliness and fear of consequence, so overwhelming, so terrible, that comes with total and complete cultural isolation that I hope to God I never have to understand. As a queer man living in a metropolis in 2018, I can only fear the idea of that fear, and barely contemplate what it could mean to live under its hand for my entire adult life.

It’s to Mike Feehan’s credit that he handles these scenes — and quite honestly, given the audacity of the animal figures throughout, all scenes — with the kind of straight-forward banality that underlines just how “normal” this kind of oppression was on a day-to-day basis for men of Huckleberry’s type in the 1950s. It makes the scene of violence against Huckleberry even more grotesque to me for its banality, and the riffing from a distance by Snagglepuss this sort of macabre way of dealing with a pervasively painful reality.

This is theater, as much as the plays worked out on the stage — the constant buckling under a condition of oppression that likely seems, for people like Snagglepuss and Huckleberry, to have no hope of change. They must act as if it is simply life, as the hound opines with little drama, “to live is to suffer from one’s appetites.”

It is on stage that the audacity of this oppression plays itself out, and then only through an intermediary, as Huckleberry himself returns to his tinfoil dinner and his placid, unmoved expression. It’s crushing to read, and at the same time, inspiring that Russell and Feehan were able to capture the essence of that kind of dynamic so cleverly.

Snagglepuss #2 ups the ante in a seductively subtle way over #1, taking the surprise of the set-up and deepening its meaning. This is the 1950s condition for gay men, not simply in where they drank or how they fit into the neon of popular culture, but how many lived in a state that I can only thank God I didn’t have to experience. Here’s hoping those who still do in this country of ours can, like Snagglepuss, take courage from the pen. Because for a lot of people, it’s all they have.