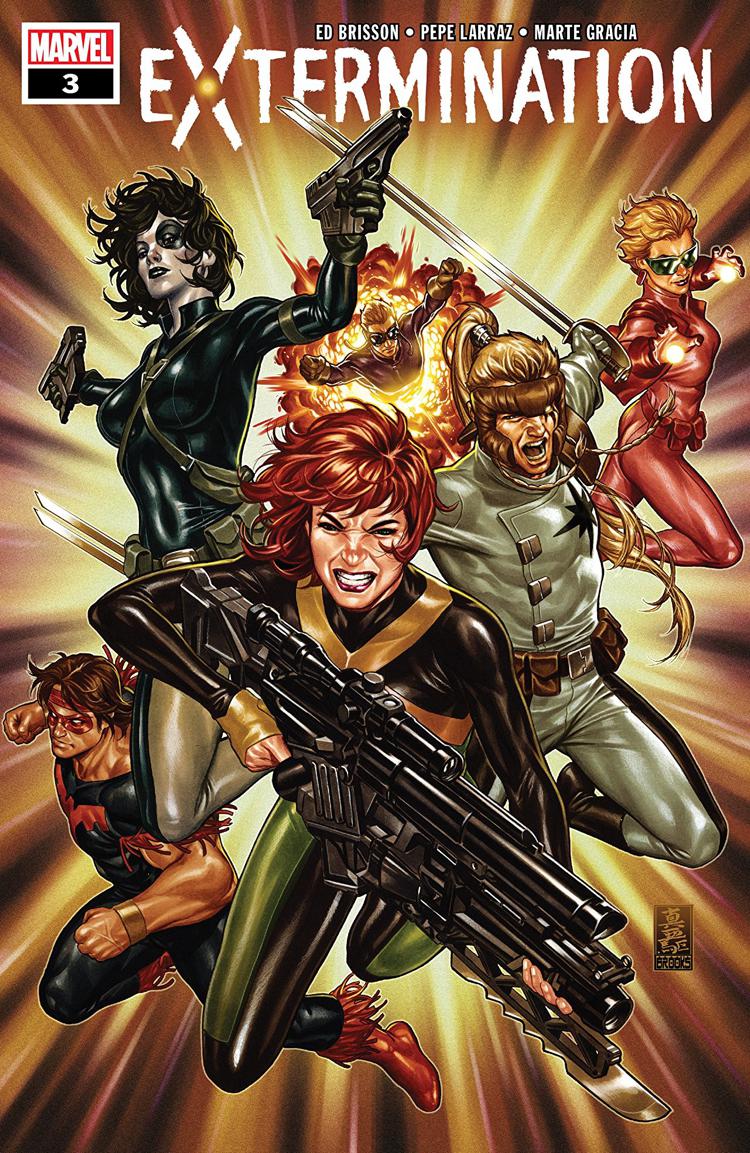 Ahab’s cliffhanger Hound reveal at the end of Extermination #2 pays off right away in this issue, and that’s just the starting point for the middle issue of Extermination. Written by Ed Brisson, drawn by Pepe Larraz, colored by Marte Gracia, and lettered by Joe Sabino, Extermination #3 continues the tale of turmoil tosses into the lives of the X-Men.

Someone is hunting the time-displaced X-Men, with 2 casualties and at least 2 more presumed casualties. Among those most impacted are the original X-Men who were propelled into the current day following the Avengers vs. X-Men event. Young Iceman and young Angel are M.I.A., and young Beast is in the crosshairs of Ahab – master of the mutant-hunting hounds.

Brisson puts a lot of story motion into Extermination #3, with the two timeline warriors (Cable and Ahab) continuing their quests. Except in this issue, Brisson reveals those quests might not be one and the same. Heck, they might not even be parallel. Their quests, however, have disrupted a lot of lives and stirred a bunch of pots, many of which bring about some fan favorite X-Men, like Cannonball, Jean Grey(s) and the overlap of both in the form of a somewhat reconstituted X-Force. The X-Men aren’t the center of this story, they don’t experience character arcs, they just happen to receive a lot of chaos.

The plot drives Extermination #3 forward, taking the spotlight away from any one X-Man, and positioning the concept of the X-Men at the center.

Larraz certainly does his part to emphasize the scope of the story, as he layers in detail on each and every drawing throughout this issue. His details are as meticulous as making sure there is a fire extinguisher on the X-Wing (they’re really getting away with that?!) and as visually impactful as making Warpath one of the physically largest people to ever appear in a comic book. Gracia jumps right in line with Larraz, and augments everything Larraz does, but then goes a few notches beyond, adding texture to clothing, right down to the downy softness of the collar on Old Man Logan’s coat. Gracia employs a sharp range of color settings to distinguish the locales and prominent emotions therein. These two are a fine combo, one of the very best in the business today.

What they bring to the panels, Sabino delivers in the word balloons and beyond. Visualizing the dialog and ambient noise of Brisson’s script, Sabino showcases a wide range, from hoarse, clinging-to-consciousness rasping the “ARGGGGH!” scream of a dismemberment in progress.

Extermination #3 is the middle point of this journey. The X-Men already aren’t the same as they were prior to the first issue. Heck, they’re not the same at the end of this issue as they were at the start – except there’s still two more issues left! Brisson, Larraz, Gracia, and Sabino do good work here, and it’s more than enough to keep my attention on Marvel’s (not-so) merry mutants.