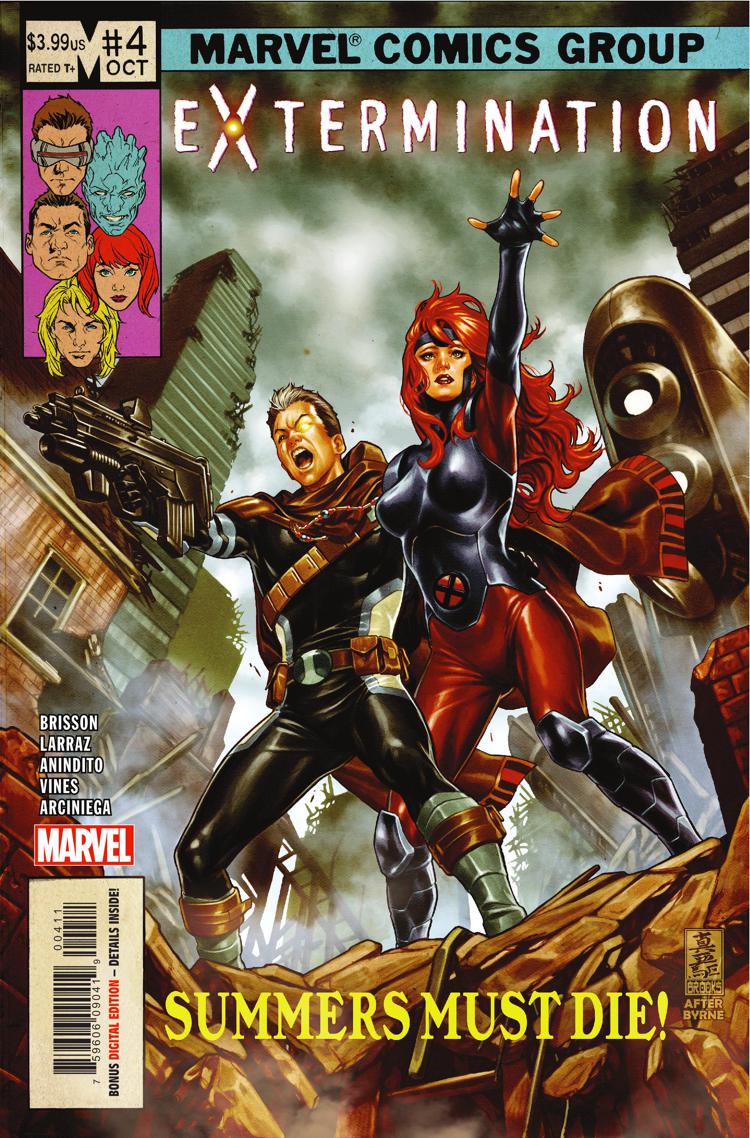 More often than not, if you’ve made it to the penultimate issue, you deserve a solid payoff, but the problem is you may not always get it. That uncertainty is the case for Extermination #4.

The first thing I noticed as I was reading Extermination #4 was the art. Notably not Pepe Larraz, I had to flip back to the credits page to double-check. Larraz is credited with layouts. New (at least to me) artist Ario Anindito gets the role of penciler for this comic, and has Dexter Vines alongside him slinging ink. The colorist is another name I don’t recognize: Erick Arciniega. Well, at least Joe Sabino is onhand for letters.

Anindito and Arciniega turn in some solid work, but in the faraway shots, with large groups of characters that would be meticulously detailed in Larraz’s pencils, the handoff is obvious. Not terrible, but obvious. Vines does a good job holding it all together, but his inks are grittier than Larraz’s own inkwork would be. Again, not bad, but noticeable. Anindito and Vines combine quite nicely in the tighter shots – single figures, facial expressions, flashback scenes layered under the conversation between Jean Grey and Nate Summers. In some spots, it appears Anindito tips his pencil towards Rob Liefeld, adding in a little extra crosshatch that Vines picks up on, particularly when Li’l Cable trains his guns on X-Force.

Arciniega’s colors are solid enough throughout, but like Anindito for Larraz, Arciniega for Marte Gracia is a noticeable change-up. And that’s OK for this single issue, which taken on its own merits is bold, bright, and energetic. Arciniega fills in color backgrounds that pop into the readers’ faces and set the moods as the story builds to its jaw-dropping end.

In between the first page and the last, writer Ed Brisson connects some dots for the readers. He also skips right over some other dots to get the picture he wants us to see, but the story is vibrant enough to take those wobbles in stride and enjoy Extermination #4 for the wild romp it is.

Ahab’s purpose and Li’l Cable’s true mission are revealed, as is the intersection of why both are here and now. It all revolves around the original five X-Men, as readers have seen since the start of Extermination. What doesn’t add up for me, though, is the impact other characters can and should have. If one of the five “butterflies” disrupts the timeline, shouldn’t any other butterfly also have the same impact? Are there only five impact points for history? It seems a bit hand-wavy to me, especially given the sacrifices of Bloodstorm and Mimic, but as I already said, Brisson has a tale he wants to tell. And he’s doing it.

Like the previous issues of this series, Extermination #4 has a surprise moment at the end of the issue that has me eager to read the next chapter. That eagerness is tinged with ambivalence, however. I like the work Larraz, Anindito, Vines, Arciniega, and Sabino bring to this issue, but I really do wish we had an entire story penciled by Larraz and colored by Gracia. If they’re back next issue, that will add a nice touch to the series, but on the flipside of that, Anindito, Vines, and Arciniega will have one more issue’s worth of work to gel and to make their contribution to Extermination stand out. Regardless, this penultimate issue has some fun payoffs, sets up some tense revelations, and gives readers a reason to look forward to the conclusion of Extermination.