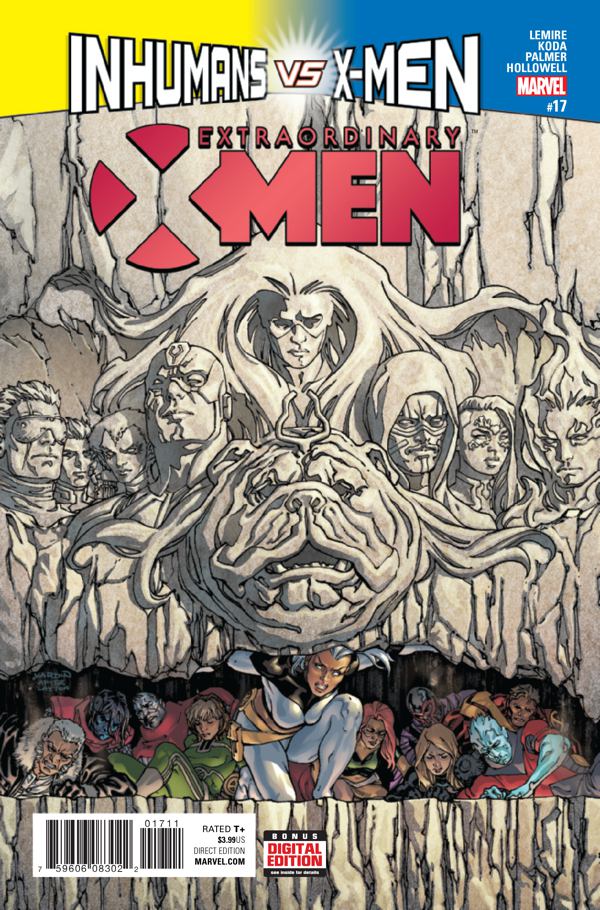 The cover of Extraordinary X-Men #17 is an homage to the classic 1984 Secret Wars #4 cover. Whereas Hulk was the only thing preventing his Avenger allies from being crushed by a mountain, Storm is leading the X-Men at a time when everything they’ve fought for is being threatened by the Inhumans. The Terrigen Mist that grants Inhumans their powers but makes mutants fatally sick is about to spread worldwide and Storm must decide how far the X-Men will go to prevent the Earth becoming inhospitable to mutants. While it’s no secret that the X-Men ultimately choose war, this tie-in issue to the main Inhumans vs X-Men crossover gives readers additional background to Storm’s decision in a very poignant way.

It’s ironic that it took an over bloated crossover for Jeff Lemire to write a relatively understated issue but after 16 issues, his fast-paced and eventful Extraordinary X-Men run finally has a chance to breathe.  From the very beginning, the title’s main focus has been about dealing with M-Pox, the disease that mutants are being ridden with following Terrigen Mist exposure, but for the first time, readers take a step back to see how the X-Men are emotionally dealing with such a predicament, just in time for the controversial plot to take center stage. Told through the eyes of a young girl named Alisha who’s staying at X-Haven with her terminally ill mutant sister, Lemire gives us a practical look to how the X-Men would be seen from an outsider. Alisha’s narration doesn’t pull punches and the X-Men are not portrayed as perfect heroes. Filled with cliques and too busy with internal squabbles and secret meetings, the X-Men ignore Alisha at every turn. It’s a rare side of the X-Men to show but one that rings true and the depiction of these characters being so overwhelmed and indecisive makes their eventual decision to go to war extra satisfying.

Despite being told through the eyes of a new character, this is still very much a Storm issue. Inhumans vs X-Men is shaping up to be one of her defining leadership moments and this single-issue story gives extra weight to every action she makes from here on out. Forget Jean, Storm has always been the true heart of the franchise and Lemire brings her straight back down to earth, giving her a moment of relatability that’s all too rare in the X-Men line today. When Storm finally makes time to meet Alisha’s dying sister, the issue delivers a emotional punch that this crossover and the characters involved desperately needed.

Over on the art side, penciler Eric Koda appears to have been working against a deadline as he devotes time and detail to some pages but drops the ball on others. A double-page spread depicting Storm’s many different roles over the years comes out glorious but the pivotal panels of a helpless Storm visiting a dying young mutant are populated with murky, lopsided faces. Tom Palmer and Morry Hollowell make this somber issue brighter and more colorful than it needed to be and after so many issues, the generic medical tent imagery of X-Haven is tiring. Nevertheless, all artists deliver on the final page and the image of a tearful Storm finally deciding to attack the Inhumans really hits home.

Marvel crossovers are often bogged down by their large casts that it falls to the tie-in issues to deliver smaller character moments that deepen the motivations driving the main plot. Extraordinary X-Men does just that and many readers will find themselves caring about the Terrigen Mist plot for the first time since it was introduced. The X-Line will be filled with more obligatory Inhumans vs X-Men tie-ins in the coming months and one can only hope that they’re just as engaging and purposeful as this issue was.