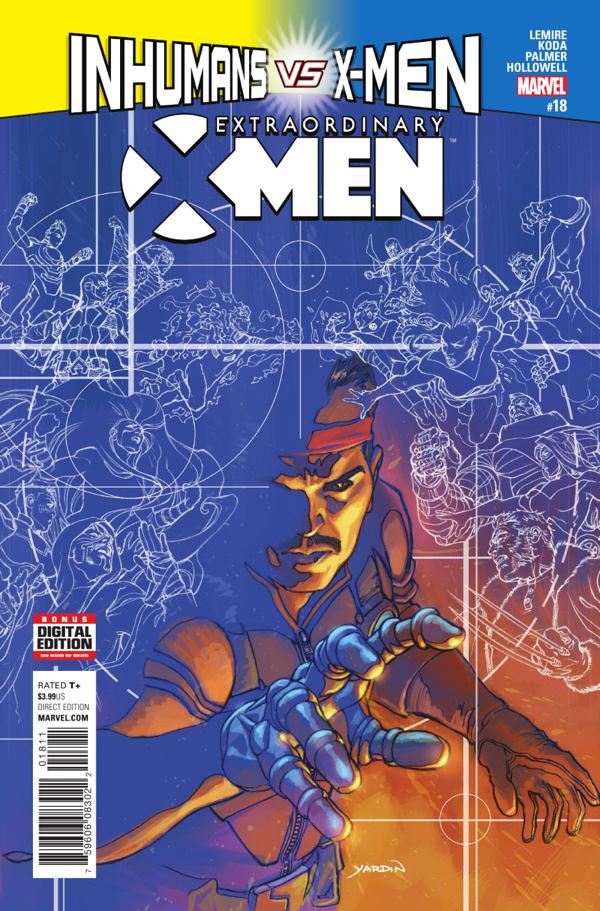 As Inhumans Vs. X-Men chugs along each week, a trend is beginning to develop within the tie-in issues. Instead of trying to outdo each other by claiming to be essential side stories, each issue so far has focused on a specific character. In Extraordinary X-Men #18, writer Jeff Lemire decides to devote a story to the often sidelined Forge and while the payoff is lacking, fans will ultimately appreciate the personal story in the midst of this chaotic crossover.

Creators and fans alike often lament when a title is forced to get in line with a crossover and produce superfluous tie-in issues but this isn’t the case with Extraordinary X-Men for a few reasons. One, the conflict with the Inhumans has been the focal point of the series since Lemire began so it feels like the series has been building towards the crossover rather than slowing down to support it. And second, Lemire is using these tie-in issues to further develop the character beats that he’s been playing with all along. His depiction of Forge as an under appreciated genius comes to a head here. Throughout the Terrigen Mist crisis, Forge has been integral to the X-Men’s survival and hasn’t gotten so much as a thank you. In fact, he’s barely recognized as a team member and has been consistently shown in his workshop, grumpily yet diligently following orders from Storm, who happens to be his ex-lover. Lemire takes us inside Forge’s head, literally, to show readers just how he feels about his current situation and gives him extra motivation so we have more reason to root for him in the main book.

If this issue sounds too much like a soap opera to you, you’re right but luckily, Lemire gives the relationship drama a break and while paired on his side mission with Old Man Logan, Forge learns of an alternate future version of himself. While this might seem like a detour from the personal nature of the issue, it’s great fun and gives readers who might not be familiar with the character a glimpse of his potential as a badass. Lemire writes Forge and Old Man Logan’s rivalry with a maturity that the characters deserve and longtime fans will rejoice at the prospect of an X-Men love triangle that doesn’t involve a certain redhead.

Victor Ibanez is the perfect artist for this type of story because of his commitment to facial expressions. Forge’s anguish, exhaustion, and bitterness are so accurately presented here that you hardly need his narration to understand his emotional state. Forge is a refreshing character to see depicted because he doesn’t have a visual power set and he looks more like a car repairman than a superhero. Not giving him a costume and drawing him in slacks, a t-shirt, and a hoodie sets him apart and ironically makes him more interesting to follow. Jay David Ramos and Marcelo Maiolo’s muted colors compliment Lemire’s low-key script, giving the issue the “calm before the storm” vibe it needed.

Having Old Man Logan artist Andrea Sorrentino’s art on the pages showcasing Logan’s future is a very nice touch. His Mad Max inspired portrait of Logan’s world is one that only he himself can get right and the contrasting art really hammer home how harsh Logan’s future was. Sorrentino’s iconic style transforms what could’ve been just another alternate version of a character into a truly memorable scene.

Instead of ruining the flow of this title, the Inhumans Vs. X-Men crossover has enabled Lemire to bring a brewing subplot to the forefront. A full issue focusing on Forge’s internal struggles and feeling of neglect isn’t the most exciting read but every now and then, it’s important to take a step back and have these kinds of stories to remind readers of these beloved character’s humanity. Like Forge himself, it’s not flashy but it’s essential nonetheless.