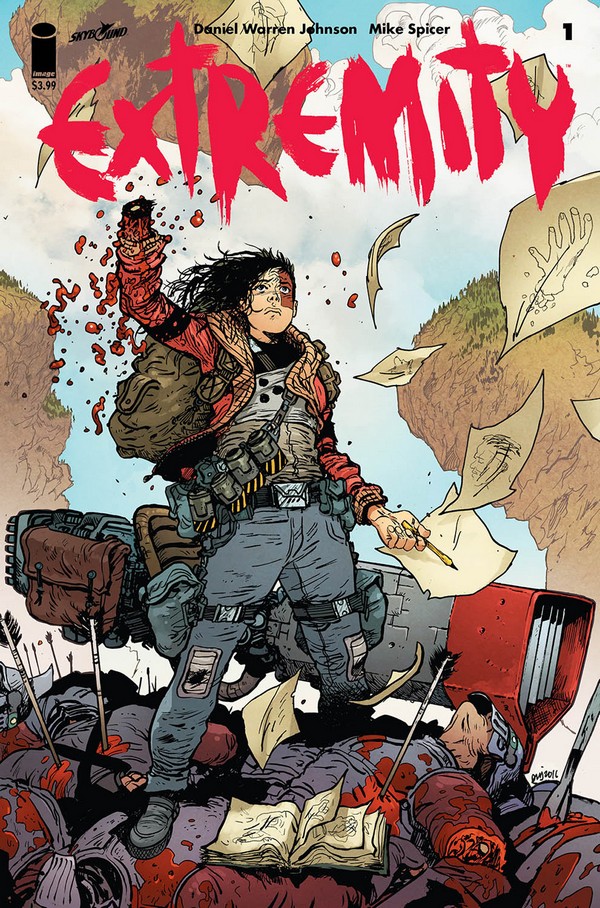 People sometimes relate losing something special to them feeling like losing their right hand. In Daniel Warren Johnson’s new series at Image, this is exactly what happens. Daniel Warren Johnson has created some really great stories in his past works, with books like Space Mullet. Fast-paced, fun, and fantastically drawn, his comics have a firm sense of life and energy. Extremity #1, with Daniel Warren Johnson at the helm with scripting and art is another exceptionally well-done comic for his portfolio. And, while perhaps less “fun” and more “real,” Extremity  #1 provides a wild and engrossing first issue. With Mike Spicer on colors and Rus Wooten lettering the heck outta this book, Image has another hit on its hands.

Extremity follows Thea and her family, survivors of a vicious attack from barbaric enemies. Thea was once a great artist, but during the attack, her hand was severed and she is forced to relearn her craft. With more than just her limb missing, Thea searches for the fulfillment her art once gave her, and, it seems, may find it in exacting revenge against her attackers, who are also her mother’s killers.

This issue questions the morality of revenge in an action-filled drama set in an alternate universe. Daniel Warren Johnson has created a set of well-defined characters in the span of one issue. His ability to not only establish a compelling plot, but provide character development so early on makes this first issue a deeply satisfying read. Things in this story move at an alarmingly fast pace, but is done in a way that moves a reader seamlessly through the plot, driving home the emotional story beats along the way.

As if the story wasn’t great enough, Daniel Warren Johnson propels the narrative forward with an enormous amount of artistic talent. His style and knack for tackling complex scenes of action was exciting to watch unfold across the page. The page layouts are easy to follow with characters that feel larger than life in each panel. My one gripe is that the characters all look a little too similar at times, though I imagine this is a product of making the main three characters look like family. However, Daniel Warren Johnson provides small details to help you differentiate between the siblings involved in the story. In addition to capturing kinetic action in the more high-energy scenes, he is also able to portray fine-tuned emotion that grips a reader on deeper levels.

Mike Spicer is doing great work on colors in this issue. While Daniel Warren Johnson’s Space Mullet was mostly black and white with blue shades, it’s incredible how the coloring really works well with his inky lineart. Spicer complements the dark lines of the art with bright colors that are grounded in natural tones, carefully leading the eye around the page. Battles are toned red with energy, while quieter moments are more based in earthy, neutral hues. Rus Wooton nails the lettering with loose balloons that capture the style of the book well, never intruding on the linework, but standing out nonetheless.

Extremity #1 was a superbly crafted first issue into a world I want to learn more about. The characters stick with you after reading the issue, and I look forward to seeing them grow. While I’m not entirely sure where this story is headed, as the plot seemed to centralize more around the characters rather than big events, I will be picking up the next issue with a smile on my face.