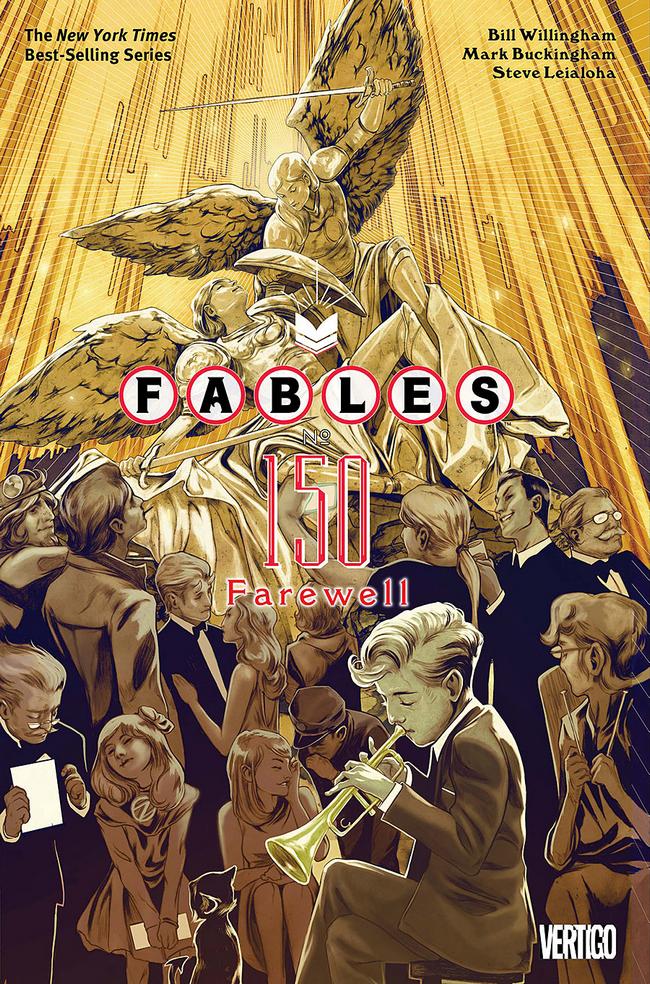 The final confrontation is here. A king and a prince. A witch and a spy. Two sisters who always fought and never knew why. It all ends here. Or is it just the beginning? The next generation grows up and their world keeps on spinning.

As last issues go, Fables #150 is a doozy. Also functioning as volume 22 of the trade paperback collections, this final issue runs some 160 pages with an extra length story, lots of mini-epilogues, an essay from Willingham himself, and a gorgeous gatefold cover by Nimit Malavia depicting most of the Fables crew in grand arrangement. Billed as “Once Upon a Time… For the Last Time,” issue #150 packs a lot of story into the end, but there’s a bit of anti-climax to it all that I just can’t shake.

I’m not sure if it’s the manner in which Willingham resolves the Snow White/Rose Red conundrum, which feels like it aims for clever and just falls off at practical. Or maybe it’s the choice of narrator for the final story and the revelations that come for the future of Snow White and Bigby Wolf’s family. It just doesn’t resonate as emotionally as I expected for the climax to more than a decade’s worth of serialized comics.

That said, there’s plenty to love in this volume, and where it may lack in emotional punch, it pulls off in the format and its number of opportunities to provoke smiles.

Past the final confrontation, we get to see the last stories of so many of the characters we’ve come to know and love over the course of 13 years — and a number of different artistic teams that have either jumped in here or peppered the title over the years. While I am always partial to seeing the world of Fables depicted by Mark Buckingham (and we get that satisfaction here), having the likes of Neal Adams, Mike Allred, Gene Ha, and Joelle Jones contribute stunning chapters on the fates of the Wolf children is very welcome indeed. It makes for a richer send-off, and feels less like the end of a comic book series and more like the last book penned by the Grimm Brothers themselves, handwritten with every detail carefully engraved.

Nothing takes the place of Buckingham’s final story alongside Willingham for making this extended book feel like the title we’ve all known and loved. There’s just something about the artist’s take on Snow White and Rose Red that makes them feel like genuine people and not simply caricatures. Not every character feels as well-rounded as those two, either narratively or graphically, but it was quite the wise decision to hinge the end of the series on them. As they were at the beginning, so too the end.

Ultimately, it’s nearly impossible to judge a book like Fables #150 against any other final issue, as we’ve never quite seen a conclusion like this before. It certainly reads as a true celebration for what this series accomplished. The final moments may not feel as compelling as many of the ones that got us to this point, but looking back, it’s a good place to stop and close our eyes and dream of it all over again, chapter by chapter, book by book.