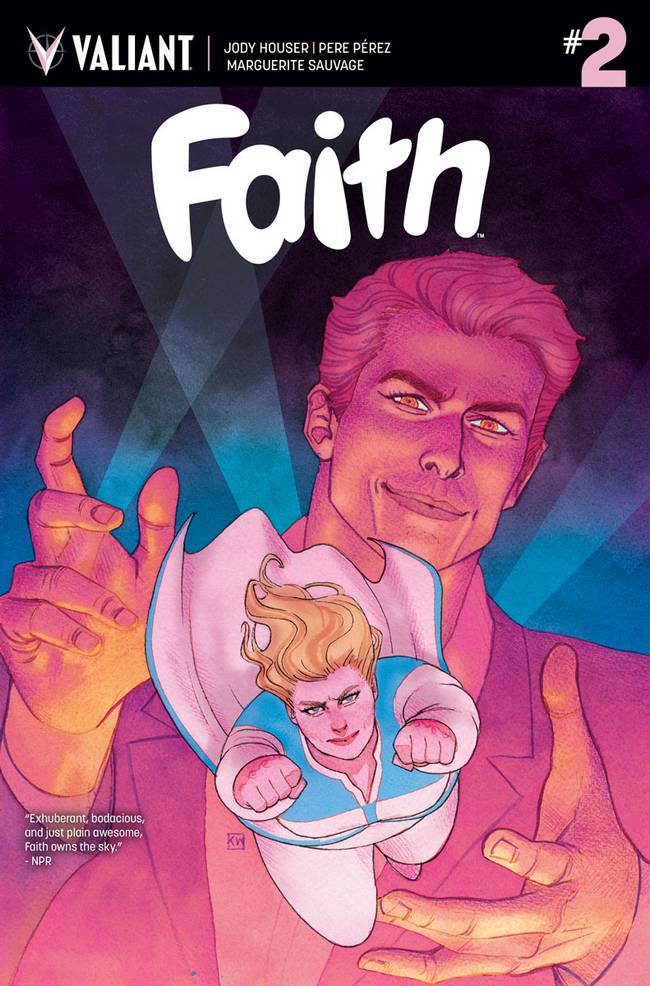 In a devilish twist from the previous issue, famed heartthrob Chris Chriswell has captured Faith! But is this really the end of Zephyr?

Houser delivers a fun and outlandish villain to Faith, a villain who is almost if not as genre savvy as Faith herself. Chris Chriswell, the epitome of all superhero actor Chrises, divulges his true feelings about superheroes and his actual aspirations that are swiftly crushed due to his all-American good looks. Chris Chriswell is the standout character of the issue, especially with his ridiculous backstory and his even more absurd conclusion to how he can become what he’s always wanted to be. Zephyr’s column feels not as well written as the overall issue, but other than that, the writing is great.

The art Perez and Sauvage bring to the table is fantastic. Perez’s outfit choice for Klara is wonderful, the Sailor Moon shirt is so great. The “Hyped!” website on Faith’s smartphone is pretty fun as well as the infinite amount of Chris stunt doubles that come out of nowhere to attack Faith. Whoever thought of that deserves a gold star. I would say that Wendell the Cameraman mysteriously disappearing from the issue after setting up the camera feels a bit off (why go to the trouble to draw a not-Chris-Chriswell-stunt-double-lackey and name the guy if we don’t even see the character again?), but maybe he’ll pop up in the next issue or so.

My favorite scene throughout Her Greatest Enemy is probably the backstory for Chris Chriswell, which combined the fantastic efforts of Sauvage & Houser. The nonchalant, villain-monologued backstory about pursuing his dreams only for his dreams to become a nightmare is just enjoyable to read and felt like a very Faith sort of villain. The beautiful design of the kid-Chris’ drawings and the fade from innocent Faith blues to dark and villainous reds are perfect and make the scene.

Overall, Her Greatest Enemy is a fantastic issue and lives up to its name, even if it doesn’t seem so at first. Chris Chriswell and Faith play off each other well and I’m excited to see what’s in store for the next issue (hopefully, Archer will make a brief appearance). I highly recommend it.