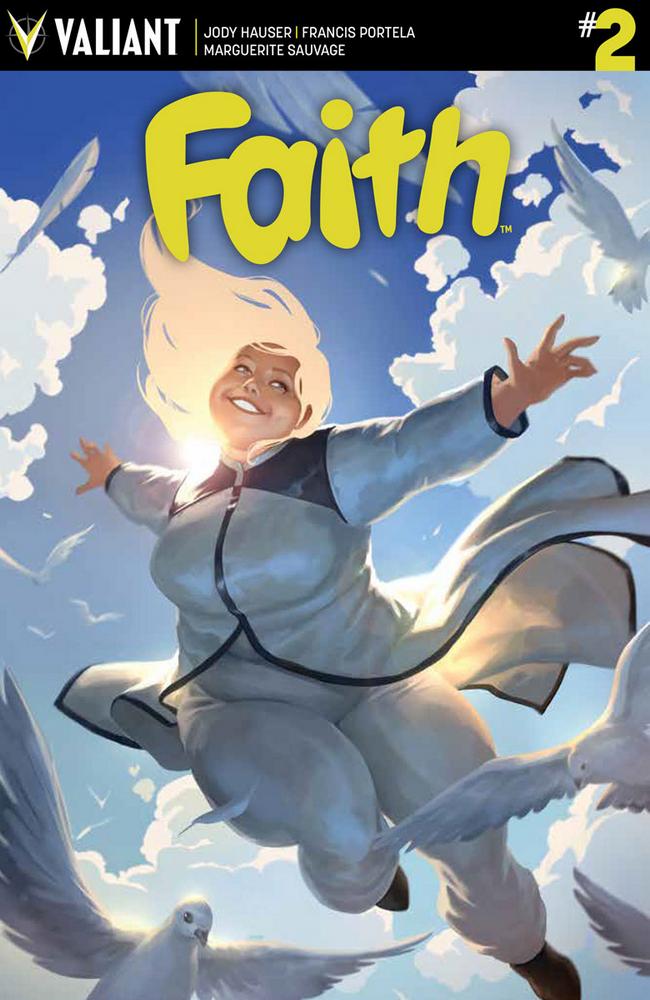 What do you do in between explosions and gunfire?

Sometimes you can’t save everyone, and Faith is reeling from the end of the first issue. She’s not alone, though, as her buddy @X shares some of her remorse, helping Faith realize that she doesn’t have to go it alone. She tries her best to convince an old flame to help her, only to no avail. Work doesn’t make things much better, especially as Faith comes face to face with a crisis on her doorstep.

Faith #2 picks right up from the first issue and does not disappoint. We get a much more detailed look at Faith and her feelings about being a hero. At the end of the day, she does the best job she can, but some experiences are harder to shake. She went to L.A. to start a life for herself only to find that the balance between work and heroism isn’t easily toed.

Jody Houser takes us deep into Faith’s emotions, carrying her through regret, hesitation, and anger. The beginning of the issue is wrought with Faith’s guilt at not being able to save everyone she could. This foray into the inner workings of Faith’s mind propelled the story and framed her interactions with each of the characters. My favorite scene was Faith realizing what her boss did to her article and confronting her about it. She is loving and compassionate, but it looks like there is little hesitation on Faith’s part when she is about to tell someone about themselves. One of her mottos may very well be, “Well, if you’re feeling froggy, then jump.” I would have loved for this scene to carry out, as it captured something really awesome about our titular hero.

Francis Portela and Andrew Dalhouse create a portrait of “Summer’s” life that feels very real, even as Faith casts off her red wig and takes to the skies. Their work together is very clean, and they illustrate an extensive array of expressions, deepening Houser’s already emotional story. Everything about Portela and Dalhouse is wonderful, right down to Portela’s details and lines and Dalhouse’s spot-on color work.

Marguerite Sauvage’s dreamy scenes steal the show. There’s a great parallel between Sauvage’s and Portela’s work, contrasting the dire and emotional with something soft and lighthearted. At her core, Faith seems to be someone who is optimistic, though empathic and emotive, and the art conveys this with two very distinct styles within the issue. She hopes and dreams and she’s imaginative, so Sauvage illustrates that the deeper parts of Faith live on despite the gravity of her circumstances.

Definitely keep reading this series, as Faith #2 offered some great character development and introspection. I still hate that this will only be a miniseries, as it could really go a lot of different places, especially with a character like Faith at the helm. This is a nice and rather insular cape story with a slice-of-life element, but also a little bit of imagination. Once the series is done, which I don’t want to happen quickly, this story will be a great weekend chill story on a warm and sunny afternoon. Until then, definitely cop this issue.