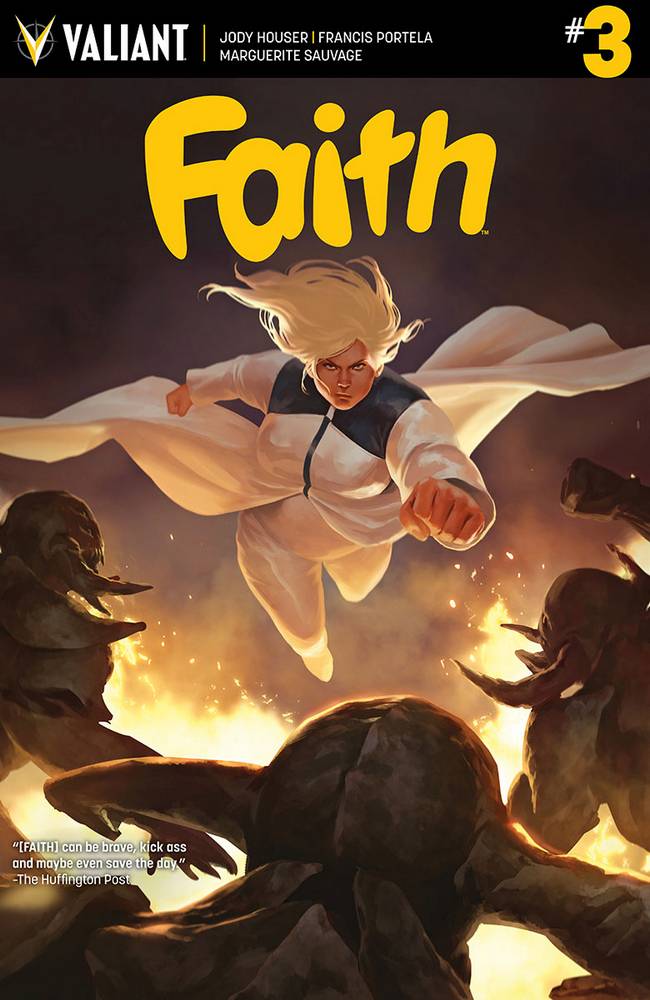 When in doubt, go for the crowning moment of awesome!

Faith has no choice but to reveal herself to her coworkers, recognizing the danger she has already put them in as she fights the assailants from the previous issue. As she and her team craft a story to protect Faith’s identity from the public, mechanations from the series’ antagonist are moving toward their final steps. Faith gets rocked and a revelation leaves her reeling when she finds out how different parts of her world, past and present, have crossed.

I’m utterly amazed at how this issue of the Faith miniseries amped up the surprises and the tricks in a way I didn’t expect and that left me wanting so much more. I’ve said it before and I’ll say it again: Faith needs to be an ongoing series, and this issue shows why. There’s a much larger world outside of our hero that is just begging to be explored and she would be the perfect character to do it. Between the storytelling and the consistently fresh art, Faith #3 lets us know that the creative team at the helm of the series definitely has the talent to pull off a longer story without losing the novelty or complex range of emotions of the titular character.

Jody Houser’s writing was spectacular in a number of ways. For one, there are some excellently timed cultural references, from Buffy to the X-Men, throughout the issue that showcase how much of a nerd Houser and Faith are. Two, Faith’s sense of enthusiasm and joy is not encumbered by her circumstances, which portrays her as someone who is able to retain some semblance of happiness in a sometimes literally explosive life. Three, the twists in the story make sense, came out of nowhere, and helped to make things full circle in a number of ways. Each of these elements demonstrate Houser’s ability at writing interactions between characters and fleshing out the personality of the main character, giving her attributes that feel human and real.

Francis Portela does not disappoint, utilizing a style that captures even the smallest nuances of emotion in characters. Each expression is realistic and marked with tiny details that indicate Portela’s skill at conveying feeling. Marguerite Sauvage’s dreamy style used in the fantasy sequences takes on a more nightmarish tone, a rather shocking but nice change that added a new spin on these imaginative scenes. There are some new additions to the art team, Terry Pallot on inks and Michael Spicer on colors, who add to the flair of Faith #3’s visuals without skipping a beat. Pallot in particular puts the pen to good use in distinguishing some of the more light and airy parts of the issue from the dreary and lightly terrifying. Andrew Dalhouse and Spicer on colors evoke different emotions and tones in varying scenes. Faith’s office is crisp and clean, while there are other scenes that feel warmer as the sun sets or dusty within the clandestine realm of the antagonist.

There are evident challenges in creating narratives that are confined to limited issues, but this entire team has done a great job rising to the occasion. The twists were genuinely surprising and realistic, and the art has taken on new and subtle distinctions that were important for this issue in particular. The execution of this chapter of Faith’s story was absolutely on point leaving me both excited for the final installment and heartbroken that it will have to end. If you’ve been on board so far, you cannot miss Faith #3. If you haven’t, it’s never too late to pick up the previous two issues!