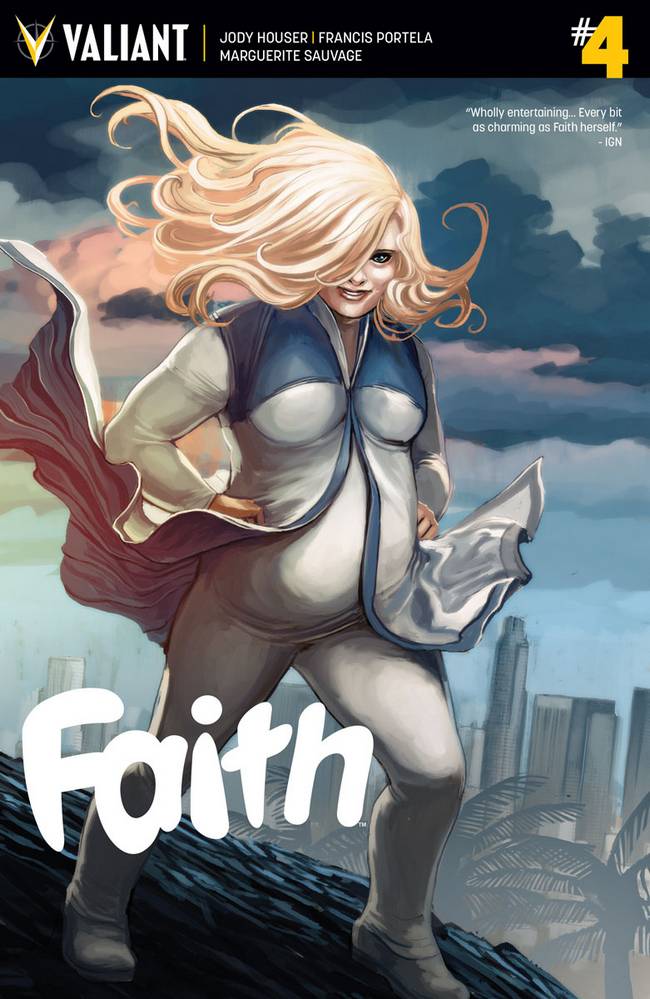 With her own ragtag crew of variously powered beings, Faith seeks to end the reign of the would-be alien overlords and to rescue the potential Psiots. She and her team are quite literally thrown into the fire as they work to change the minds of the aliens and a familiar face tied to Faith’s past. With expert strategy and a knack for emotionally delivered speeches, Faith does what she does best in the end of her story.

I left this issue thinking, “There’s a lot here,” and there truly is. There are many thematic elements in the writing that stand out and exemplify why Faith needed to be and WILL be an ongoing series. For one, her use of nerdy and pop culture turns of phrase litter the issue and are aptly delivered each time. Faith reveals how much fictional worlds meant to her as a child, bringing home why she talks like she does and why this issue of the series is particularly important.

Second, Faith’s emotional flashback reminds us of why comics are important. Not only do they help many of us travel to places different and better than the world around us, but they also have the capacity to instill within us a sense of hope that helps us survive. In some ways, Faith #4 directly addresses why a series like this is vital, and the delivery of this scene has intense emotional resonance. It touches on why things need to change on the page and in the industry so that more people besides the usual can find a place that is emotionally safe in all manner of ways.

Jody Houser seems to be giving us a taste of what’s coming forward. As the (not-so) mini moved to this point, the pop culture and nerd references increased. In this issue, there are many of them and other nods to common types of stories in comics. This nearly fourth wall breaking style of writing allows for interesting introspection that I imagine would fit many of our own minds. Houser also solidifies Faith as a character who can deliver evocative lines imbued with compassion and welfare for others. Her goal isn’t to beat people first, and reason later, and that helps her stand out as a character. The interactions between each of the characters within the plot felt natural and there are some moments tinged with a subtle humor that makes this series what it is.

In terms of art and placing, this issue is strong due to Marguerite Sauvage’s fantasy scenes interspersed through the issue. They reveal a sense of wonder and adventure that pierces the intensity of the main story. These types of choices keep the story from going too grave but also highlight Faith’s own personality. Juxtaposed with these softer scenes are the action and dynamism that takes over much of the main story of the issue. Francis Portela, Andrew Dalhouse, and newcomer Pete Pantazis create fight scenes with many different elements, but that don’t lose sight of movement or figures. Scenes with Hadley in particular are illustrated with clear and fluid movement without being overly complicated.

I could definitely say so much more about Faith #4 but I’m here to write a review, not another dissertation. The talent for this series was wonderfully chosen, and this issue displays a type of storytelling that has levity mixed with dire straits, fantasy and dreams mingled with the gravity of saving the world (or at least L.A.). As this series moves forward, this part of the story sets the tone for what we will see and captures so much of what is actually right about comics. There’s excellent pacing and movement throughout the issue without losing a beat, and prior strings are tied together in a manner that feels organic. I highly recommend you picking up this issue, and the previous three, if you want a story that has the trappings of nerddom without the toxicity.