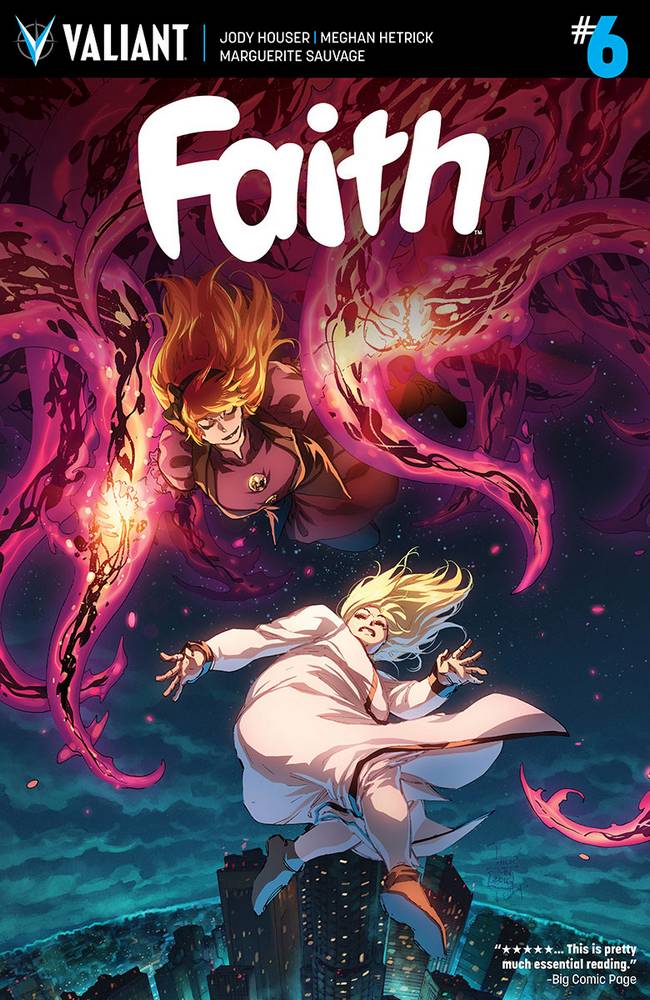 Continuing where issue #5 left off, Faith is entangled in capturing what seems to be a rogue psiot. But is that truly the case?

As always, Houser delivers a wonderful issue. The more I read Faith, the more I love her character. Faith’s references and quick thinking always make me excited to read more of anything she’s in. The Dark Star plot is interesting, especially with its twist, and I really hope the readers get to see some of the “Magical Girl Assassins” webseries at some point (all the in-universe TV shows in Faith are shows I wish were real, they all sound like so much fun).

Hetrick and Sauvage deliver when it comes to the art. Hetrick’s style feels a bit more sketch-y, with thicker lines. I think it lends well to the Dark Star story, especially with the powers Zoe wields. Sauvage’s work is always a treat to see, whether it be here or anywhere else, and I love the fact that she’s used for Faith’s imagination. There’s always this softness and sense of wonder that comes from her work in Faith’s imagination. The two styles, while different, blend well together and create one cohesive issue.

My favorite scene Hetrick drew is the scene at the very end where Faith is on a beach, hoping to find a few dragon-types as the sun sets. There’s something tranquil about the warm colors of the sunset on the boardwalk and its Ferris wheel. There’s something so relatable about Faith’s toes in the sand, the waves leisurely licking the beach near her as she pokes at her smartphone screen. It’s a relaxing scene that makes me wonder about the storm to come.

My favorite panel Sauvage drew is the “Broadway High School” panel (an in-universe parody I’d love to watch). Zoe sings with her whole soul into a microphone as people smile and cheer in the background. Her backup singers, one looking extremely similar to Faith herself, look like they’re having such a great time. The pink haired backup singer definitely looks like she’s adding a bit of ham to her performance. There’s something so wonderfully cheesy about the whole panel that makes me smile.

Faith is always worth a read. It would be sort of weird to start reading Faith at issue #6 in the middle of an adventure, but I do highly recommend reading from issue #1 and just binging the six issues that are out, if you have the time. Faith’s a great role model, an awesome hero, and leads a strange yet intriguing life. There’s no reason not to read Faith.