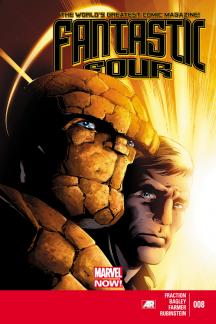 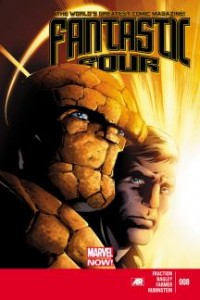 It’s clobberin’ time on Yancy Street as Thing gets his 24 hours of regular human form in Fantastic Four #8.

Fraction brings us his best writing of Benjamin Grimm yet as we watch his quest for justice on Yancy Street unfold. Thing hasn’t been the primary focus of this series so far, so fans will be happy to see him getting the majority of the panel time in this issue. The dialogue in this issue is stronger than it has been in the past few, and there were some great moments with iconic characters from Ben’s past. The story itself isn’t Earth shattering, but there are some revelations that come from within that may set up some interesting arcs going forward. Yancy Street is rather generic in this comic, but when the Thing gets emotional about his neighbourhood I will admit it always gets me revved. Fraction paces the action well, and flips the comic from pure dialogue to action at just the right moment. For fans of Ben Grimm, this script will be right up your alley, without a doubt.

Mark Bagley’s art, sadly, does very little to bump this decent tale up to anything more than a decent comic. There is nothing blaringly wrong, per se, with Bagley’s art, but it does lack any visual punch to make this comic stand out. His art is strongest with the “regular” people of Yancy Street, but it did make me notice how the Four and the kids look awkward during their pages, which just shouldn’t be the case. The art never distracted me fully from the story, but I couldn’t help wishing for stronger and more dynamic art throughout the comic.

In the end, this isn’t a bad comic, but there is nothing revolutionary within the pages either. Die hard fans of Thing will enjoy some moments of it, but other than that it is a rather generic read.