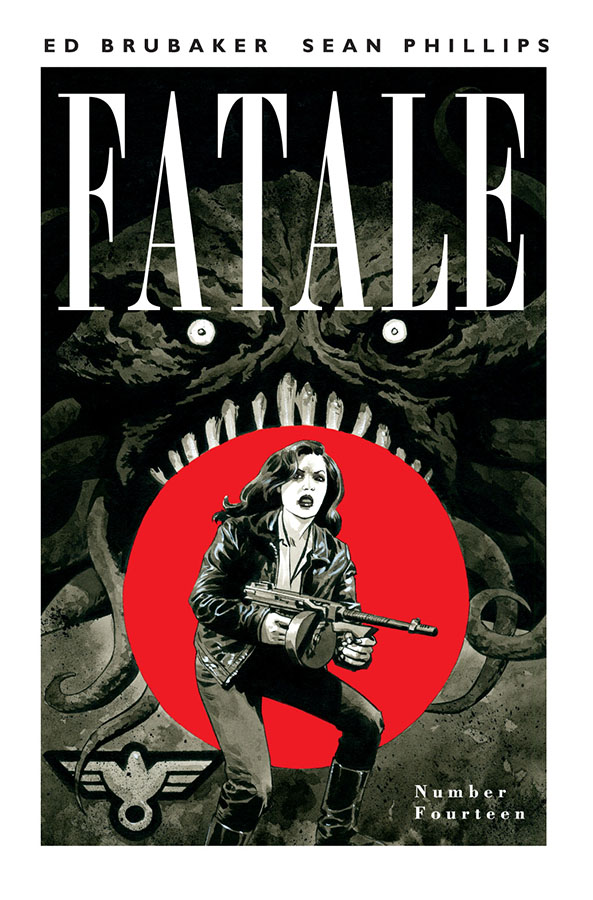 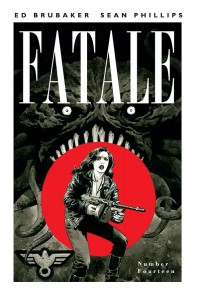 The single issue interludes continue as this month we are treated to a bit of Josephine’s origin after seeing tales of her predecessors in the last two chapters. Set in 1943 Romania, Jo is captured while in search of answers and encounters the men and monsters who would spend the next six decades chasing after her. As her path luckily crosses with a familiar face to the book, Jo finds out a little bit more about her own place in the world, and just how dangerous her life has become.

As an origin tale, issue #14 is a kind gift to the kind of reader who always wants to know exactly what has happened before in the most straightforward way possible. That said, I’m not sure how many of those types of readers indulge in Fatale, or would enjoy its usual magnificent balance between revelation and concealment of the truth behind Josephine and those who would do her ill. Brubaker tells a much more naked story here, bereft of the book’s usual noir-ish tones to the point that I’m not sure I enjoyed it as much as last month’s spectacular profile of the woman I presume to be Jo’s immediate predecessor, the mysterious and impressive Black Bonnie Smith. Even that tale, set in the Old West, maintained the sort of genre blend I’ve come to expect from the title, with cowboys and Indians appearing tainted by an undercurrent of the macabre. But here, I seem to be missing that undercurrent in favor of a more deliberate serving of it, front and center.

This could also be a result of my exposure to the numerous comic book projects that have already blended the horrors of World War II with the fantastic — as demons and the occult have featured prominently on the graphic page as far back as the 1950s and as recently as in Hellboy. As a result, the freshness that I felt from every issue until now seems a little lost, but make no mistake — Brubaker’s dialogue and pacing suffer not at all for the familiar territory. His beautifully written introduction to the male narrator at the start of the book, seconded only by Jo’s charming dialogue with her new mystical mentor, was a significant highlight of the issue. Clearly Jo here is a much more emotionally open woman, still only recently affected by the still mysterious forces that would grant her eternal youth. As a result the contrast to her earlier (later) rendering does seem slightly jarring, but perhaps importantly so. If the narrative here seems much less clouded, and more direct than what I’ve come to expect from Fatale, it could easily be that reflection of Jo’s earlier psyche making it so.

As always, Phillips delivers a solid performance as co-creator and artist, capturing the era of this particular story with enough grit to be convincing, but not so much gruesome detail as to distract from the supernatural devastation that could be potentially unleashed. His Jo is a stunning beauty whose appearance betrays her deep intelligence and cunning as well, and it is from both creators’ hands (not to mention that of brilliantly talented colorist Elizabeth Breitweiser) that we continue to be gifted with one of comics’ newest, but most powerful, leading ladies. While this portion of Jo’s origin will undoubtedly propel the next round of modern day stories in the title, I’ll admit to looking forward to a return to a more mysterious femme in the book’s lead. It seems to suit her (and Fatale overall) much more.