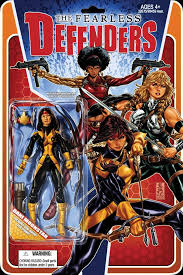 There are some comics that take themselves seriously and are sweeping epic Sagas (pun intended.) Then there are books, such as Sensational She-Hulk  or Skullkickers that are willing to poke fun at themselves for the sake of a great read. I’ll give you one guess as to which one Fearless Defenders is turning out to become.

If you guessed the second, you win absolutely nothing! But, don’t you feel better at yourself for recognizing that! The cover, with the Mark Brooks drawing of a Dani Moonstar action figure package, is the first clue that this series has one goal: to be a fun read. Even the recap page one was just a reprint of last months cover with a word balloon conversation that can make you chuckle, if you’re not too busy being judgmental and rolling your eyes.

From character description boxes to brief character interactions, this book was filled with tongue-in-cheek moments yet continued to move along an apocalyptic scenario that needs to be stopped.

While this book did see the introduction of Dani Moonstar, as promised, her actual role in the group has yet to be seen. There’s not too much more to say without spoiling. She does get a chance to kick some butt and her history as a Valkyrie does play a role. However, mystery continues as to just what that role is going to be later on.

For those raging or swooning over last month’s kiss between Riggs and Valkyrie, I’ll tell you now, it is addressed, however briefly. Cullen Bunn does a great job of balancing humor, action and pacing. The book never feels stagnant and leaves you wanting to immediately have the next issue in your hands to see what happens next.

Sliney’s art continued in a similar fashion from book one. Where he really outdoes himself is with the villain who appears: Caroline Le Fey.  Her thin and purposefully emaciated body is painful to look at and makes her scowl and smiles all the more creepy. The shadows on those same panels, in the middle of the book are a little much making it a little hard to read her face. However, I think that too was done very purposefully. Also, it’s only in a small square of a single panel, but Sliney’s profile of Storm is just lovely to look at. I’m looking forward to watching the team members grow in size and the additions made with his pencil.