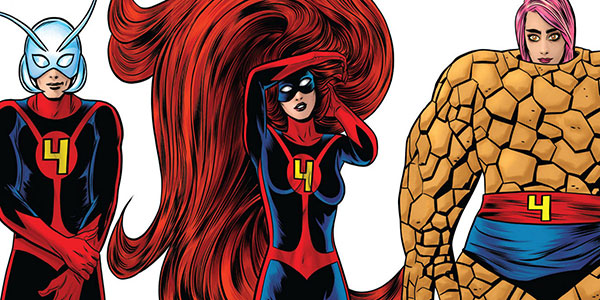 Following up on the release of Marvel NOW’s new volume of the Fantastic Four comes the new FF: Ant Man! Medusa! The Sensational She-Hulk! Miss Thing? When Reed Richards must take his family away from Earth for four critical minutes, the call goes out to find an FF to hold the line while they’re gone, as well as care for the growing number of kids the foundation has come to adopt. Each member must choose his or her own replacement, and the result is a brilliant introduction to the team and family as a whole for any reader, new and old alike.

Having read Fraction’s take on the First Family mere weeks ago — and finding the result to be fairly bland and uninspired — I went into this issue with great trepidation. But the cleverness and wit behind Fraction’s characterizations of every single member of the cast won me over in a huge way. Like his recent launch of the Hawkeye ongoing, FF is chock full of smart humor and deep personal insight, without allowing any protagonist to take him or herself too seriously. From Sue Storm’s poetic waxing on motherhood to Reed Richards’ seeming inability to relate to tragedy on an emotional scale, Fraction draws out the best of each character while simultaneously introducing a cast of nearly two dozen. I feel that I’ve gotten a little vignette of every child, hero and heroine — a primer that can take me into this series without any hesitation that I know the motivations and disposition of each and every figure. Scott Lang’s heartache is honest without dragging down the pacing and his She-Hulk is both smart and brutish, a combination I find absolutely necessary in her that I find somewhat contradictory in portrayals of her more famous cousin. If anything, Fraction’s Thing is a bit of a caricature, but as the real stars of the show aim to be Ant Man, Medusa, She-Hulk and Miss Thing, I can easily forgive.

To be fair, I’d be hard pressed to dislike any book illustrated by the magnificent husband and wife team of Mike and Laura Allred. Mike Allred’s style is so deceptively simple and cartoonish, but always imparts a great deal of expression through the barest details. A single cocked eyebrow or furrowed brow delivers as much information as the dozens of details a more voluminous artist may provide. His perfect sense of line, coupled with Laura’s beautiful pop art color palette really makes this book stand out among not just books in the Marvel NOW line, but also by comparison with nearly every other book on the stand. The warped sense of perspective Allred employs to denote an almost surreal experience (how else could one describe being asked to run a super-hero team for an all-important four minutes?) is only rivaled by the genius contortions he puts Mr. Fantastic through from frame to frame. Each kid is rendered so uniquely through body language that in some cases, I’m not even sure the dialogue is necessary to get to know the character. Just even how Leech’s eyes shift from side to side as hunches over on Alex’s lap shows a great degree of sophistication with so so little effort.

FF stands as a perfect collaboration between writer and artists, with just the right mix of fun and entertaining characters. This issue was a — dare I say it — fantastic introduction to what I hope will be a long lasting series, and in my opinion, the absolute best launch from Marvel NOW to date. Readers searching for smart, funny adventure should look no further. These two letters say it all.