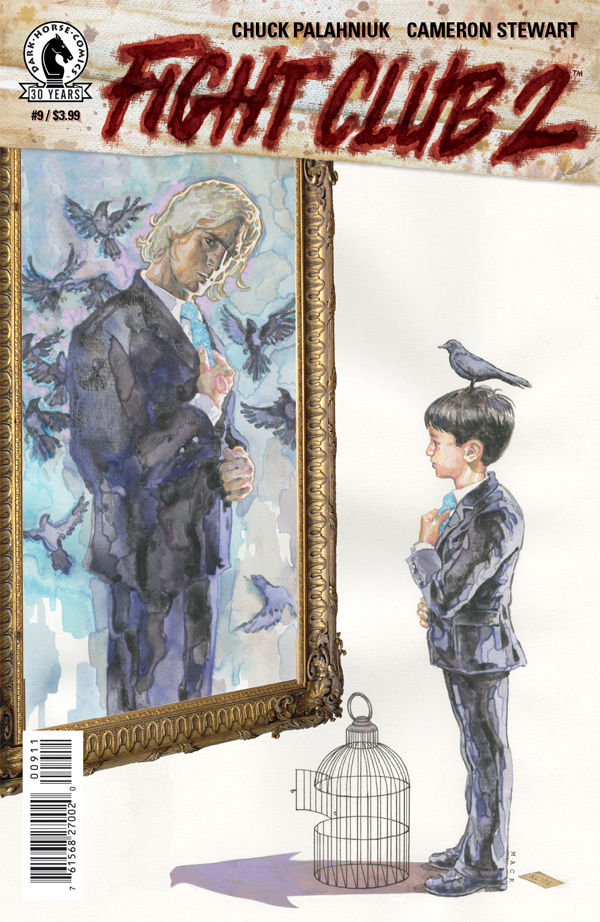 As the full nature of the Tranquility Gambit is revealed and Fight Club 2 gears up for it’s apocalyptic finale, Palahniuk and the Stewarts manage to find the time to make an old ship canon, proving once again they know the ins and outs of comic storytelling as well as any more established name in the industry.

This latest issue is, beyond being a thrill ride that drops the last puzzle pieces in place for the grand finale, a great example of how to use page layouts to build suspense and further decompress storytelling at a critical juncture in the plot without dissolving into a bunch of talking heads. As the ninth entry in a ten issue arc, Fight Club 2 #9 has a lot in common with Batman #49, and the different paths taken by their creative teams reveal a lot about how varied the approaches can be to achieving what is effectively the same end.

As the last bit before the grand finale of the Superheavy arc, Batman #49 stepped away from having three concurrent viewpoint characters to use sweeping two page spreads of a selection of the alternate futures that could result from Bruce’s pivotal decision in one last gambit to build up the suspense for his climactic return to the Batman role in issue #50. The result was an issue that felt wide open for all the breathing room that Yannick Paquette’s art was given relative to Capullo’s more typically dense layouts, far more intimate with the focus narrowed down to just Bruce, Alfred, and Jules with the storm brewing outside left unseen, but also rife with the tension of having to wait for the result of his decision. The net effect is something very much like a full orchestra fading down to a single furious violin, the audience held rapt, waiting for the first string to snap, and snap it does.

Ironically, it’s Fight Club 2 #9 that gets denser and heavier as it builds towards the execution of Tyler’s grand plan, The Tranquility Gambit, bringing the entire cast in on the effort with just one single page splash to break it up. The sense of claustrophobia being built up across the issue begins quite literally with Sebastian, still trying to impersonate Tyler, emerging from the closet. Cameron Stewart narrows the space even further than the panel borders by framing the figures in the mere crack that Sebastian has opened the door, bookending the close of the issue as the key players find themselves drowning in sand like an hourglass.

The closet serves a double purpose however, as upon his emergence, Sebastian is faced with the revelation that Angelface survived Tyler’s punishment and that they had been sleeping together the entire time as he pulls Sebastian in for a deep kiss. Up until now, the revisions to the characters relative to their film and novel counterparts have been to undermine previous assumptions, but the revelation that Tyler and Angelface were, in fact, sleeping together and the jealousy that drove Sebastian to pummel him was based in fact is quite the opposite. It’s no great victory for LBGTQIA representation in the medium the way that say, relationships between Angela and Sera or Harley Quinn and Poison Ivy have been followed through on in recent months were, but it remains a fantastic wink at the enduring fixation on the gay subtext of the entire narrative.

It’s a perfect opportunity for it too as this issue is mostly about things coming full circle and tying off the motif of fathers and sons, creator and creation. Tyler and Sebastian face off, but they do it with Tyler speaking through his son’s body and Sebastian once again gets beaten up by him and slapped by Marla. Amusingly both Angelface and Marla confirm that he isn’t in Tyler Mode by kissing him which wraps up the judas kiss motif of the chemical burns sported by the inner circle going all the way back to the original novel. Classic Palahniuk repetition is hardly needed to spring “This isn’t love as in caring. It’s property as in ownership,” into the reader’s mind. Palahniuk and his writer’s circle also return to the fray this issue as they impassively prod Sebastian to access Tyler’s memories and discover the full nature of the Tranquility Gambit. Relative to other metafictional exchanges between creator and creation from She-Hulk’s verbal sparring with John Byrne to Animal Man’s famous chat with Grant Morrison, this one is decidedly cool if not outright chilly compared to those passionate, emotional encounters, but it’s all part of Palahniuk’s legacy with the characters.

“Our fathers are our models for God. If our fathers bailed, what does that tell us about God?” Tyler once posed of Sebastian. Tyler claims that God doesn’t need or want them, and it worked fantastically for commentary about the feeling of directionlessness experienced by Generation X, but the shifting landscape of the comic has changed the reality around that statement considerably. Tyler was responsible for the death of Sebastian’s father and the estrangement from his own son. His implying that he’s the devil in a splash page of himself, Sebastian, and Marla in a medieval illustration of the temptation of Adam and Eve that casts him as the snake makes the Gnostic conception of the story quite literal. Palahniuk and his writers group are the true godhead that Tyler, the archon, has displaced, but true to Tyler’s claims, he’s dispassionately benevolent.

The most interesting thing about Cameron Stewart’s cartooning this issue is how there’s a difficult to explain quality to how he draws the writing group that makes it obvious that they’re drawn from a real person’s likeness without significantly departing from his style for the rest of the characters. Palahniuk himself seems more stylistically consistent with Sebastian and Tyler, which may be because he’s been drawn into the series more and Stewart has developed more of a shorthand for him, or it could be a very clever way to portray him as having one foot in each world while the rest of the group are more obviously detached. It’s pretty great either way.

The final circuit that gets closed as the sand starts filling up the cavern that Tyler’s inner circle has retreated to under the castle is the nature of the Tranquility Gambit. Pursuant to how all of Tyler’s schemes up until now have been postmodern boiling down of religious texts into objectivist screeds, the Tranquility Gambit teases out how Ragnarock, The Masque of the Red Death, and Charles Manson’s Helter Skelter -much like Noah’s Ark- call for a small elite to hide and ride out the apocalypse before rising from the ashes to rebuild human society to their specifications. Atlas Shrugged, of course, does this too. These kind of musings on cross cultural patterns are a good chunk of what makes Chuck Palahniuk so immediately effective as a comic book writer, as it’s been a dominant feature of comics writing since the mid 1980s, as exemplified by Grant Morrison, Alan Moore, and Warren Ellis. Fight Club 2 could be its own hermetically sealed little work that does just fine on its own, but broadening the scope and scale of the narrative to work within the zeitgeist of the medium makes it a much richer experience that allows for an intertextual conversation with more mainstream superhero fare.

One way that really hits home is in contrasting it with The Dark Knight III: The Master Race and how, while exploring very similar themes, Palahniuk goes out of his way to confine the influences for Tyler’s rhetoric to Christian scripture, western literature, and Norse mythology to avoid the scapegoating of Islam for the terror and violence of the contemporary world. Fight Club 2 doesn’t completely ignore colonialism the way that DK3 does, it’s somewhere out there as briefly touched on in Rize or Die’s presence in Darfur, but Fight Club 2 mostly limits itself to satirizing the simultaneously narcissistic and self destructive tendencies in the white American psyche. Meanwhile in DK3, anti-black racism and the systems put in place to sustain it are somewhere out there, as hinted at in the opening issue when Carrie Kelly as Batman interrupts the intended summary execution of a black teen. It’s loosely followed up on in a conversation about social hierarchies on Earth are mentioned by Baal’s wives in the Green Lantern mini comic accompanying #3, but all this becomes background noise for the dominant Arab coding of the Kandorian villains doing irreparable harm to the integrity of the story being told.

It’s as ironic as it is welcome that Fight Club 2 is the more responsible return to a generation defining property. Right up to the climax, Fight Club 2 has been relentlessly surprising and refreshing in a comics landscape that seems to get more and more risk averse and chaffing despite the unprecedented level of available talent.