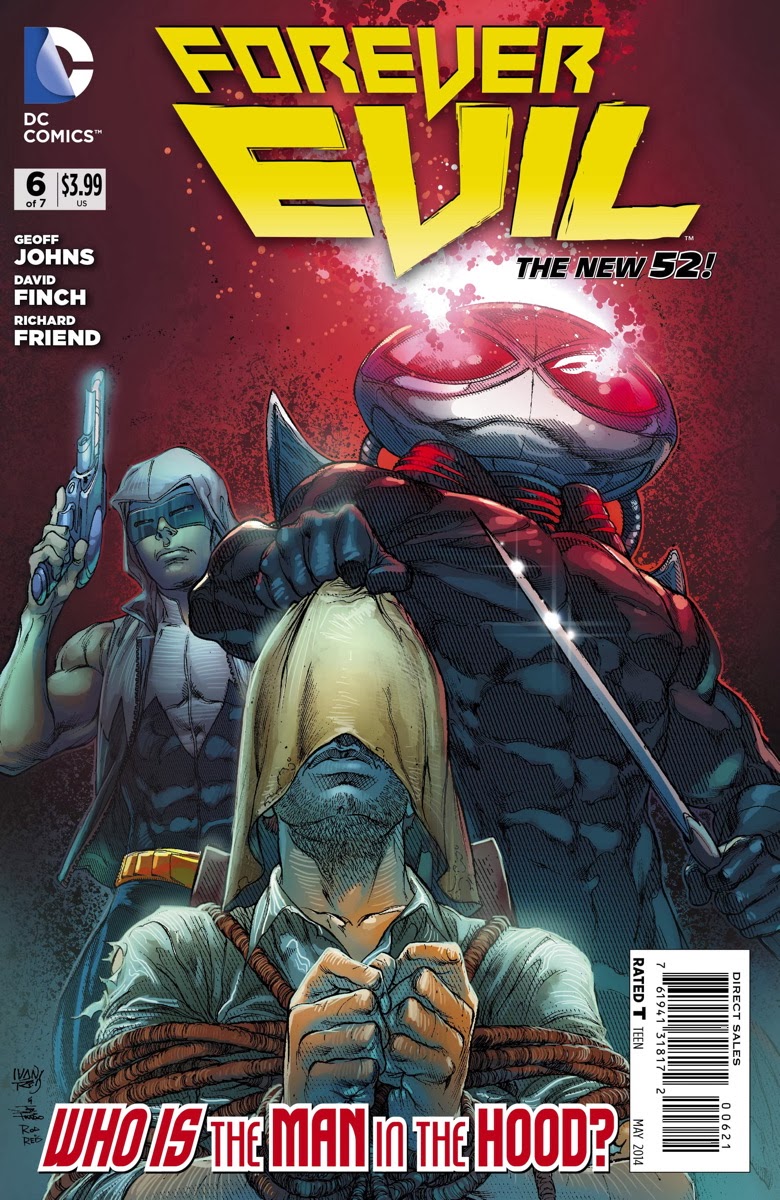 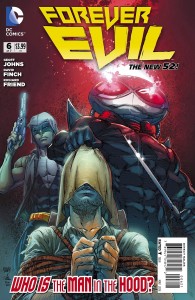 Lex Luthor’s Justice League finally comes face-to-face with the entire Crime Syndicate and — believe it or not — they are not nearly as willing to take prisoners as the villains of Earth 3 have been! The fate of Richard Grayson is revealed and the hood comes off the Syndicate’s prisoner. The result is nothing short of marvelous!

Fans who have complained about the pacing of this event title should feel a bit redeemed with this issue, as Johns ramps the action way up for Forever Evil’s penultimate chapter. Giving us not just one, but three major confrontations to the death, the writer is clearly upping the ante for what a series that still has a ton of mysteries yet to be addressed. And with all bets off for the safety of hero or villain (or even worse villain) alike, I’m still not sure what the status quo post-series will be — and frankly, that makes me seriously happy. Very few storylines in big two event comics end in surprise or misdirection these days, so being only 30 pages away from a conclusion without a sense of finality from solicitations gives me a great deal of pleasure.

What is certain, however, is that we’re seeing the true root of Batman and Lex Luthor’s relationship for the foreseeable future in these pages. Forget the snarky interchange of issue #5, the real game begins here, and I can’t say it even paints Lex in the worse light of the two. Bruce’s brief dialogue with Dick too resonates throughout, and culminates in an honest-to-God heartfelt moment that Johns so frequently excels in presenting. His characterization of Captain Cold continues to impress, which bodes well for his future as a Justice Leaguer, and the contrast between him and the colder yet Black Manta is probably more telling than his own actions. Ultimately, the moment that will explode fanboy heads is brilliantly shocking, maniacal, and exciting, but the real artistry of the writing is in Lex and Leonard.

David Finch’s art hits its height for the series, seemingly getting more masterful as the series action ramps up. Finch is really meant for confrontation, with a sense of shadow and light — and movement — that’s clearly wasted on talking heads and slow-moving protagonists. Once the battles begin, the lightning strikes, and the skies split apart, we get a real sense of magic to Finch’s line. Lo and behold, the artist I had so much trouble with in issue #2 has vanished and in his place a killer penciller with a dynamism fitting the epic nature of worlds clashing. Even the more subtle moments, like Manta’s silhouetted confrontation with a member of the Syndicate, has so much life to it. I’m fully convinced now that Finch was the perfect choice to lead up to this very dangerous moment between bad guys.

One more issue to go and a lot of unanswered questions, but the possibilities of those answers are so intriguing, it’s a blessing rather than a curse. Forever Evil may seem like its taken a long road to get to this point, but one thing is certainly clear: Lex Luthor has had a plan from the start. I may have a new favorite super-hero come April.