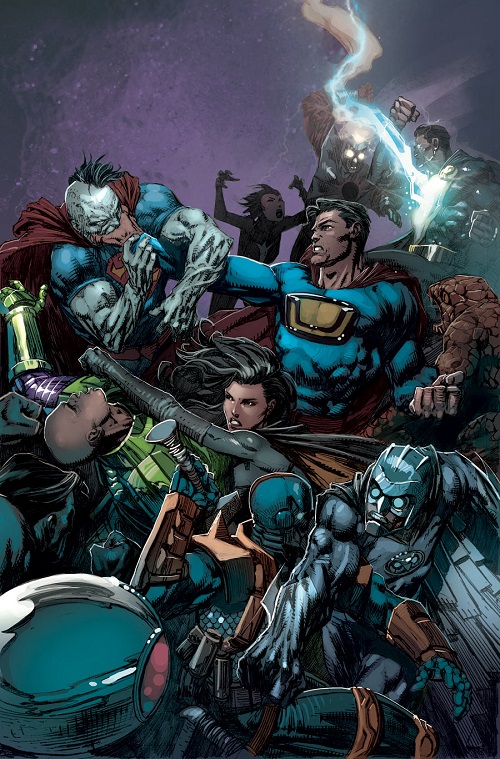 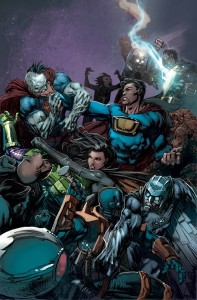 Forever Evil comes to a conclusion as Geoff Johns and David Finch bring down the Crime Syndicate and usher in a new era of the New 52 DCU.

Geoff Johns crams a lot into this issue and drives home the message that this event has really been about Lex Luthor all along. Much in the same way that his epic Green Lantern run was an examination of Sinestro, Forever Evil has it’s largest effects on Luthor, leaving arguably the most dangerous man in the DCU in a very interesting state at the end of the event. As is typically the case with will crafted events, Forever Evil does change the status quo going forward. The Syndicate have left the world in a state of ruin and while the heroes are back, we’ve seen a different side of several high profile “villains”. How this will translate into future stories only time can tell, but I’d argue several villains shifted from “evil” to anti-hero in this event, and in a believable way. Are these characters suddenly going to do the right thing all the time? Have they lost their edge? Absolutely not, but we have seen a side of several of them that we have not seen before and that is just plain exciting. Johns does not tie up all the loose ends of this series with a tiny bow. Seeds are planted for what could be some very interesting story arcs down the line, with a last page that will stop a lot of readers in their tracks. Forever Evil may be the strongest event Johns has written (yes, maybe even better than Blackest Night) and, for the first line-wide event of the New 52, it is a very well told story. As Chief Creative Officer Geoff Johns may be the architect of DC Comics in a lot of ways, but he’s also one of the best storytellers in the business and he shows why in Forever Evil #7. There is a surprising amount of emotion in this final issue, and his dialogue is rock solid. His voices for these characters are strong and set the tone for who they are in this New 52 universe and have me wanting an ongoing Luthor book by Johns even more than a Superman one. This is a damn well written comic by one of the best superhero writers in the business.

David Finch delivers some of his best artwork in the series in Forever Evil #7, and while there are still some awkward and inconsistent panels throughout, the art is decent for the most part. Finch conveys the power of Alexander Luthor very well, the character explodes from any page he is on, power emanating from him at all times. Finch nails the emotional beats of the issue for Lex Luthor, driving home his rage and much more throughout the comic. His strongest work is definitely with the Luthors, highlighting how this comic is really about Lex. Where things get dicey is with the large cast in this issue. Ultraman, at times, looks awkward and lanky and Sinestro’s face is inconsistent throughout the issue. The inking by Richard Friend is very heavy, at times seemingly diffusing some of the details of the penciling. These panels that are heavily inked do slow some of the visual flow of the issue, but Finch and Friend close Forever Evil #7 out with the strongest artwork of the entire series. The final pages of this issue definitely end the series on a high note, visually, and drive home the enormity of what is coming. In Forever Evil #7 Finch’s work is consistent with what he has done in the rest of the event. At times it is very strong, other times there are pencils that seem rushed and lacking in definition. The story is not negatively impacted all that much by the missteps, and it is written so well that the momentum stays high despite some shaky art at times.

While it was delayed for what felt like a very long time, Forever Evil #7 makes up for the gap between issues by closing this event out on a high note. It is emotionally charged, provides real character development, puts lots of toys in the sandbox for DC writers to play with, and gives readers an action packed story. This will be a high watermark for upcoming DC events to be compared to, and I look forward to reading the full fallout of the events of Forever Evil. Johns delivers another winner with Forever Evil and anyone who is invested in the New 52 needs to read this comic as quickly as possible. You’ll be happy you did.