It’s a tale of two comics, among many, landing in the hands of comic shop visitors on Saturday, May 4, 2013. Both featured multiple short stories. Both were available at absolutely no cost to the shopper. Both headlined one of the hottest writers in the comic market today. But only one of these books lived up to the spirit of Free Comic Book Day and what it hopes to accomplish.

Every year on the first Saturday in May, almost every comic book shop in North America participates in Free Comic Book Day by purchasing books to hand out to their customers for FREE. Publishers are encouraged to put their best foot forward on an issue that very well could be someone’s first ever comic book. Or could be the hook that brings someone back to the medium after a long absence. Or the incentive an existing reader has to try something new and expand their horizons. And in that sense, Dark Horse Comics nailed it this year with their combination Star Wars and Captain Midnight FCBD edition. 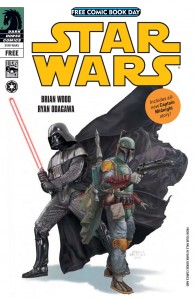 Keeping in mind the landscape Dark Horse is working with, these two stories were brilliant choices. Brian Wood’s Star Wars series, set in the days after A New Hope, has been a runaway success, bringing the comic franchise back to its roots and garnering a great deal of critical acclaim. Wood’s story here is simple, but features the man in black himself, Darth Vader, in a tale of backstabbing and clever maneuvering that fits right into the monthly series thematically without either being required reading or contradictory. Ryan Odagawa’s art is a little stiffer than the D’Anda’s gorgeous monthly installments, but that is fairly mitigated by the focus here on masked and armored figures Darth Vader and Boba Fett.

As a companion piece, one might think the pulpish Captain Midnight an odd pairing to one of sci-fi’s greatest epics, but the combination is actually genius. Dark Horse has such a varied catalog of material, that showing the breadth of its offerings succinctly to a casual or new reader would be nearly impossible — but they pretty much do it here. Williamson’s story is short, but clever, giving us a taste of both classic do-goodery and a modern betrayal that perked my attention right up. The art styles of Perez (modern) and Robinson (WWII era) also perfectly epitomize the kind of variety the company as a whole has to offer, not to mention putting the best foot forward on their Captain Midnight series beginning just around the corner in July. 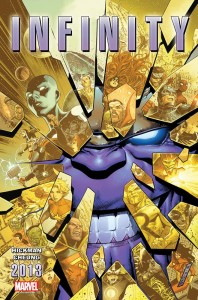 In contrast, Marvel Comics made a similarly timed choice of devoting the bulk of its Free Comic Book Day edition to a prelude for its big summer event (also beginning in July), Infinity. With its cover depicting the great heroes of the Marvel Universe — Captain America, Iron Man, Captain Marvel, Thor, Doctor Strange, The Hulk, Spider-Man, and many many more — shattering around the face of a familiar villain, I was frankly shocked to discover that NONE of these characters appear in the prelude story, save the central figure of Thanos. For one page. Instead, Hickman and Cheung share a story of alien beings we’ve never seen before, in a culture we know nothing about, setting up a story that seems to already have six months of required reading before it even launches.

The illustration is gorgeous, of course, but at the end of the story, I’m left wondering what it is I just read, and whether this makes me want to read more. And sadly the answer is no. I’m actually less likely to pick up Infinity as a result of this effort — the exact opposite of my reaction to Captain Midnight, a book I probably would have ignored if not for its feature on this special day.

But to be fair, as a faithful, educated (in comics lore) monthly reader, I’m not the core audience for this day. New readers, lapsed readers, someone not inclined to try anything new — these are the target market for Free Comic Book Day. So, are these demographics being serviced by a prelude story that features nearly no plot or action, and absolutely no recognizable icons (from a company that has more than almost any other in pop culture)? I’ve got to say no. The reader being serviced here is the guy or gal reading Hickman’s Avengers, who was just in the shop on Wednesday — and will be back in another four days time — and has in all likelihood already pre-ordered the first month of the Infinity event. This book is made for the kid or adult already hooked on comics, which is normally not a detriment, but certainly doesn’t represent the spirit of what this day is supposed to be doing for the industry and our community as a whole.

Maybe Marvel’s Free Comic Book Day offering got a few more regular fans to drop some extra cash one weekend this year, but I bet Dark Horse’s edition earned them a few brand new readers and consumers for every week of the next year and beyond. And if we’re lucky, it opened some eyes to something great along the way.