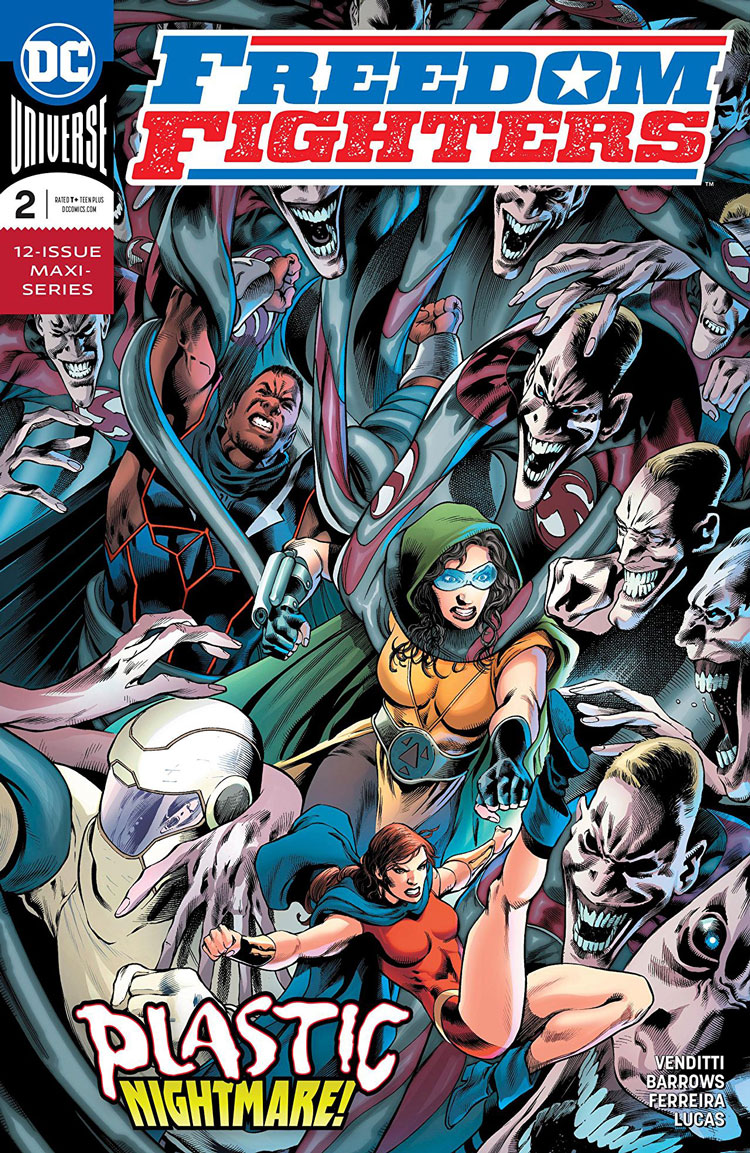 The fight is only the beginning. We can’t do this alone.

The Freedom Fighters have emerged after decades of essentially existing as an urban legend. Doll Woman, Phantom Lady, Black Condor, and Human Bomb band together to fight a gigantic and dangerous representation of genocide and oppression. They succeed in their task, and in protecting civilians, who then take to the streets to celebrate while the Fuhrer’s own agents scramble and a seemingly familiar visage begins to stir.

Robert Venditti delivers a powerful punch for the second issue of Freedom Fighters. Considering that the overall story is going to be relatively contained, it makes sense why we are seeing tiny glimpses of a developing story, but much moreso the point of ignition for the plot.

We still do not know much about the new group of Freedom Fighters besides their opposition to an oppressive regime, and Venditti writes as though we don’t need to. The bombastic events that transpire are there to gauge interest and to reflect a reality where citizens aren’t likely to care as much about who their heroes are, but about getting out of the system that has hurt them. Venditti’s writing pushes to a moment of triumph heralding a brighter future, mirroring the idea that heroes never truly die, but sometimes just need to be awakened.

Eddy Barrows sets up a spectacular opening. Immediately, we are thrust into conflict stemming from the previous issue. Barrows’ structure in penciling constantly directs readers’ eyes to something new using angular panels and perspectives. I like how the set-up feels like a classic action story, fitting for the nature of the series and its parallels to stories done around World War II. Barrows delivers by creating engaging imagery and dynamics, to the point that an issue full of fighting continues to feel fresh.

Eber Ferreira’s inks for this issue bring two words to mind: dusty and direct. In comparison to the last issue, there is much less shadow except when needed, and the atmosphere is starkly different. The murkiness does not occlude characters, environment, or the plot, but exists to bolster the feeling of conflict and dilemma through every page and panel. Ferreira’s work reminds me of the dust and debris that has to settle after a fight, and seeing where it goes during

Touching on the idea of action films, Adriano Lucas captures a particular essence within the story. Looking back to the preceding issue, the story seemed split into two primary schemes: one of a dire moment and the other of a deceptive peace. For this part of the story, we instead get brilliance through clashes of energy and a slightly brighter tone, but still subdued enough to convey the importance of the conflict central to the story. Barrows’ technique addresses an emerging heroism, best exemplified in this new team of Freedom Fighters, and showcased through deliberately placed brightness.

I think Lucas quite literally shines in every page with the Human Bomb. Of course, energized fists are going to glow, but it’s the clashes between the character and a giant Nazi robot that make this issue what it is. My favorite page depicts Human Bomb landing a major hit on his colossal foe. Color schemes are excellent opportunities to play with a lot of properties of images, and this one is truly spectacular. Energy radiates on and off the page and is a nice bookmark for this issue, but could be potentially be one for the entire series.

Comics as a serial medium means that there is not just a singular issue, but how it works within a larger collection of pieces. I love how this context is forever evolving, even after a series ends, so to see Freedom Fighters begin its evolution makes me wonder how the rest of the story is going to pan out. With the second issue of a 12-issue maxi, there are likely some major events to follow, sparked by the embers of this installment. The mood feels appropriate for this series, and it is dishearteningly timely.