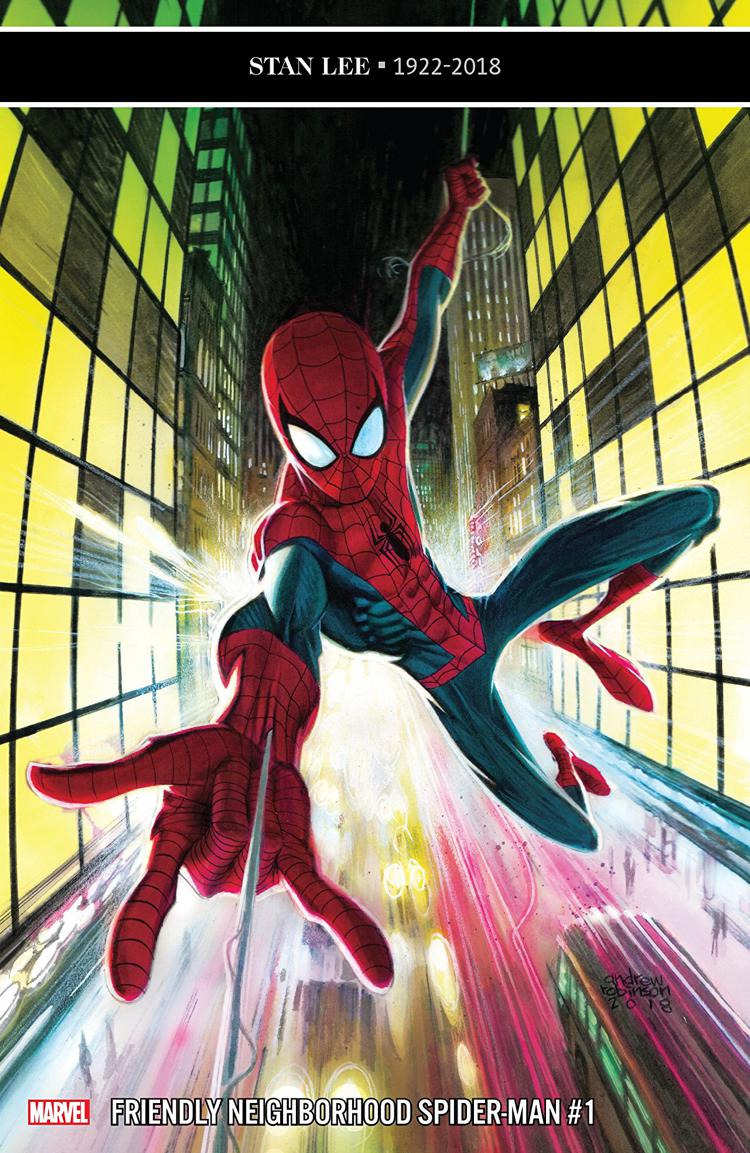 It’s good – technically as well as emotionally. But the year is way to young to crown a comic – any comic – as the champion of the staples.

Taylor digs into the “neighborhood” aspect of this comic and quickly finds Spidey’s voice, even if he’s not fighting Green Goblin, Rhino, or even Doc Ock. Spider-Man just happens to be swinging through, looking to help people – you know, the way Spider-Man does. This is why we love Spider-Man, and Taylor boils it all down to the core of the character and his sense of purpose to give us a story that needs no continuity, crossover, nor world-shaking threat to be enjoyable and complete. Spider-Man (and Peter Parker) stay nearby Pete’s apartment in this issue, which appears to be the hook for this book. That gives Taylor lots of room to develop his take on Peter Parker and Spider-Man.

Joining Taylor is one of the writer’s All-New Wolverine artistic collaborators, Juann Cabal. Despite the relatively quiet story, Cabal has ample opportunity to draw Spider-Man in action, and Peter Parker in interactions. Cabal’s take on Spider-Man is magnificent and worthy of the cover price alone, mixing in so many classic takes on the webhead that it becomes a unique take that feels like a tribute. Cabal uses clean storytelling to match his clean lines, all of which are amped up by the classic white gutters that surround most of the panels. By choosing to draw Friendly Neighborhood Spider-Man this way, it makes the border-breaking panels even more impactful and dynamic, truly underscoring the gist of Taylor’s story and the impact those beats have. In addition to the cleanliness of his work, Cabal really brings the details. His New York practically smells like New York, and the visual details are present from the spider on Spidey’s costume being just the right size to cause a scare to every link of the chain link fence at Coleman Playground.

All of the details, the action, and the splendor Cabal draws is meticulously colored by Nolan Woodard. Like Cabal, Woodard is an All-New Wolverine vet who brings a polished talent all his own to Friendly Neighborhood Spider-Man #1. Spider-Man’s costume is brilliantly bright, but believable despite the urban landscape around him that only amplifies the simplicity and vibrancy of the webslinger’s duds. Woodard keeps the city clean, but lived in and matches Cabal’s details all the way throughout this comic.

Travis Lanham’s lettering completes the appearance of this comic, with clean, sharp placement that rides Cabal’s easy storytelling to polish Friendly Neighborhood Spider-Man #1 into a gorgeous all ages comic book. The caption boxes Lanham uses match Spidey’s costume nicely, and the story is clean enough that those are the only caption boxes in the lead tale.

The backup tale is a story about one of Peter’s supporting cast and packs a punch. I’m not going to spoil anything, but I ill say he second story is a bit of a downer, particularly folllowing the upbeat adventures that launch this series.

If you’re looking for a solid read from a great creative team, give Friendly Neighborhood Spider-Man #1 a try. I’m in for whatever this team has up next. It’s nice to have a continuity-light Spider-Man comic with strong writing and good art. I’m not sure how many adventures Spider-Man can have around his neighborhood, but I’m sure Taylor can make the most of them. Maybe at some point, someone will even give the webslinger a churro.