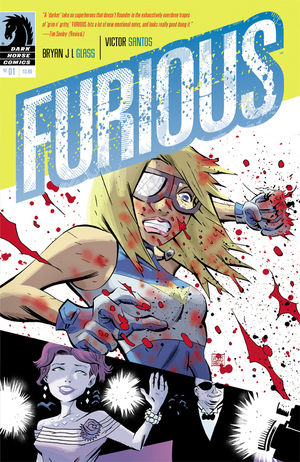 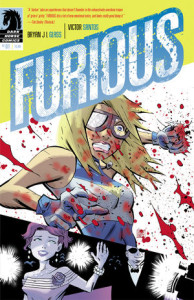 Furious is the story of a superhero whose temper gets the better of her. It is because of this temper that the moniker she’s tried to throw out to the public, “The Beacon,” is replaced by the media with the nickname “Furious.” I’ll leave it to you to figure out how this makes her feel.

Through non-linear storytelling, our hero — seeking redemption for sins past — is revealed. Death and destruction are not only part of  this past, but look to be part of her road to establishing her new identity as well. Due to the order and nature of how the story unfolds, it could potentially cause readers with little patience to lose track of just where things are going. However, for those who give it time, they’re rewarded with a story that delves to themes such as the price of fame, fame’s fruitlessness, searching for existence in life, and dealing with feelings that can overwhelm and potentially destroy you.

There may have been a man writing the words, but I felt like Glass had ripped parts of my soul from my body and asked Santos to throw them on the page for all the world to see. As a mother; a wife; a faceless mass in the daily grind day in and out; as an online reviewer; there are many hats that I alone wear. Each of us are given expectations of we are supposed to reach or surpass on any given day, adding to the pressure of our lives. How often have any one of us just wanted to scream into the void or officially self-destruct?

Here we are given a character that has done that, in a very public fashion, and realized the emptiness of it all. Yet, she looking for a new way of reclaiming what she once had, but in a more positive fashion. Unfortunately, our media-obsessed society, which seeks out everything that will increase ratings and what has gone wrong, will not allow her to do that. Perhaps that is the power in this first issue, that the themes and main ideas are laid out clearly and universally for all to find some piece they recognize within themselves.

In a style that marries Kick-Ass and Supurbia, Santos does a great job of using an only somewhat muted palette, that has each page with a bright, high contrast color bringing attention to what is important for that particular panel or page. From something as small and the graphic lines showing sound coming out of an answering machine, to our blood soaked hero, or her tabloid counterpart yelling from a newsstand cover. There is at least one piece that always catches your eye and draws attention while the rest frames and plays a supporting role in the storytelling. It helps to make the art so enjoyable. The art feels like it is an intricate piece of the storytelling and not just a medium to convey the words.

This book has struck a strong nerve within me. Even if you do not care for this comic, I believe everyone will recognize the dark but necessary message that is being conveyed. (Also, don’t be fooled, I LOVE this comic and am adding it immediately to my pull list!)

So why might you not like Furious? The art style might not be something all enjoy, feeling too stylized or not classic superhero design enough. There is a lot of motion and anxious line work that is conveyed. I could be wrong, but I think it’s rather on purpose to rev-up the feeling of rage found within our main character. As I said before, the story is told in a non-linear fashion and may not be an easy sit-and-read for some. You have to think a little more about the sequence of events that go back and forth. For a few panels, you’re not entirely clear if we’re still talking about the same character or someone else. There is also an unidentified background character who has a single speech bubble on one page that can throw off your sense of certainty, because she is dressed so similarly to the main character from earlier in the book. The only distinguishing feature between this unknown character and our protagonist is the color of her hair peeking out. This is just speculation, but I believe this character is one that has been hinted at on social media, such as Twitter, and will play a role in future issues. To be frank, had it not been for a media blitz earlier this week on Twitter, I’d still be questioning just who was which character in this issue.

Overall, I think this series is setting up to be fierce! A book that will need to be reckoned with through cosplay, fan art and deeper debate over its commentary on media-immersed existence before the last issue ever hits the stands.