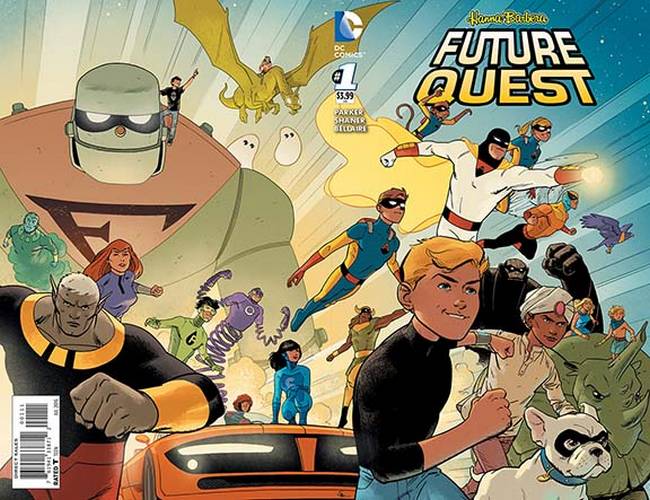 Opening with a space battle, that delivers scraps of Space Ghost’s origin story, Future Quest #1 doesn’t ever stay put, cramming imagination, fantasy, and wonder into thirty pages drawn by Evan Shaner and Steve Rude, colored by Jordie Bellaire, lettered by Dave Lanphear. Jeff Parker writes this comic, but he is clearly in touch with his visual collaborators, as the entire issue is packed with fun.

From the setting of “A distant world,” to the Everglades, the first ten pages of Future Quest #1 pack in everything from aliens fighting to Jonny Quest and Hadji buzzing around some alligators with their jetpacks. Parker shifts gears nicely in the transition from deep space to swamp land, as his cast goes from the Space Force holding the final stronghold to two adolescents finding fun in mundane assignments, and bringing fun back to comics.

Parker doesn’t just give readers a handful of characters in two locations. Oh, no. Like most everything else he writes, Parker digs in and identifies connections. The writer feeds readers bits of personality for the characters and infuses each character with purpose in their panel appearances. Future Quest #1 goes beyond Jonny Quest and Space Ghost, though, to include Race Bannon and Bandit (naturally), as well as Jonny’s dad, Doctor Benton Quest, his adversary, Doctor Zin, and a couple more surprises sharp-eyed readers can glean from Shaner’s cover for Future Quest #1.

Through it all, Parker introduces characters in a natural manner, capably aided by Shaner’s drawings and sharp, smart storytelling. Shaner could probably make a living from pin-ups and covers, as he has a knack for delivering freshly iconic interpretations of characters, but he also has a strong grasp of sequential adventure. Bellaire’s color adds a cohesive coating to Future Quest #1, minimizing the art shift from Shaner to Rude and back again. Rude’s shadows are more pervasive than Shaner’s, but he brings a nice sense of motion and his storytelling is every bit as crisp as Shaner’s. Future Quest #1 has minimal splash page action, but Shaner and Rude make several panels seem larger than life, and every panel is integral to the story while integrating the story to the imagery within each frame. Lanphear even adds some whimsy to the visuals, giving many of the word balloons some swish in their tails, both a throwback to hand-drawn balloons from the origin point of most of these characters and a hint at the hesitant emotion of the characters producing the sounds in these balloons.

While these weren’t my favorite Saturday morning adventures, they were integral to the Saturday morning experience. No one from my generation didn’t play Space Ghost at some point or wish the space bound hero were part of the Justice League or Super Friends. These characters weren’t as prolific as some other childhood icons due to a lack of merchandising crossover at the time, but they were no less familiar.

Now Parker, Shaner, Rude, Bellaire, and Lanphear have refreshed the entire line of Hanna-Barbera characters, starting with Space Ghost and Jonny Quest, and offering glimpses of the Herculoids, Birdman, and Shazzan. A calamity is set to pitch the characters together, and with Parker writing it, I’m locked in. Wherever this creative takes this bunch (and more) of characters, they’ve already proven they’re going to do so with a sense of adventure and lots of built-in fun. Future Quest #1 is a fun comic that is suitable for all ages and a welcome reminder of what “fun” looks like in comic book form.