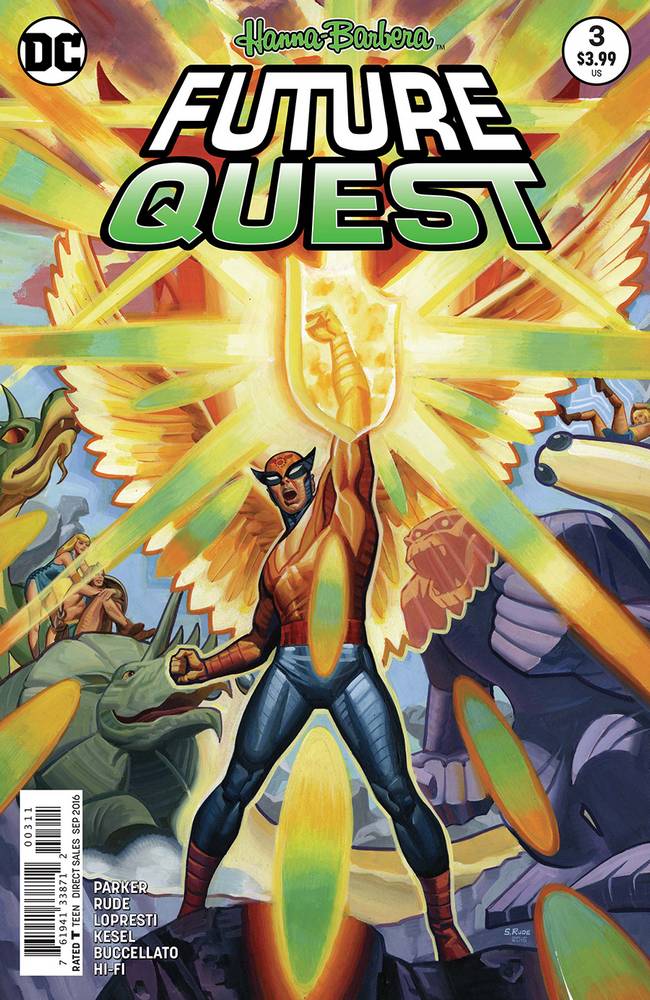 Future Quest #3 matches the quality of the 2 brilliant issues that have come before it, and I am completely enamored with what Jeff Parker and his artistic collaborators are doing with this series. I’ll say this out of the gate: I have zero frame of reference for any characters in this part of the Hanna Barbera universe, and that may be the best part about Future Quest: I didn’t have to.

Jeff Parker isn’t telling a story that is fueled solely by nostalgia, he’s telling a great story that feels like it was yanked from a time gone by, without sacrificing modern day storytelling styles. I feel like I’ve been thrown into the middle of a Golden Age story without the awful dialogue, and I absolutely love it. I wrote about Parker’s work on Convergence: Shazam! that he is able to deftly walk the line of making something feel classic yet modern at the same time, and that’s still true with Future Quest. This issue brings Birdman into play in a big way, and I feel like this guy is a classic hero I’ve been waiting years to read.

Parker’s dialogue in the primary story and the backup is excellent and I love the voices he is establishing for these characters. Both stories move along at the right pace for the space they have to work with, and I am totally locked in to both. These characters are engaging and dynamic and Parker is wielding them masterfully. I was surprised by how quickly he hooked me in with the backup story, considering my aforementioned lack of knowledge of The Herculoids, but he had me sucked in with the first page. Future Quest #3 is a comic that hits a sweet spot that not many other comics can find, the closest I can come to in my mind would be Astro City, telling new stories that feel like they are classics….and Parker does it so very well.

Steve Rude handles the pencils for the primary story and he does an excellent job with Birdman. His pencil work has a brilliant retro feel to it, and Steve Buccellato’s colour work gives the artwork a lot of depth. Rude pencils a significant amount of pulpy sci-fi action in this issue and handles it very well, setting Buccellato up for some crazy colourful visuals. I will admit I worried early on when I didn’t see Shaner following through the solicits as the primary penciler of each issue, but Rude has put those worries to rest.

Aaron Lopestri and Hi-Fi team up for the backup, and they maintain the tone that has been set in Future Quest very well. Lopestri’s pencils are sharp and the inks by Karl Kesel finish the pencils off very well. Hi-Fi’s colour work makes the world of the Herculoids feel extremely dynamic and this was a backup story that complimented the main title very nicely.

Future Quest #3 is a fantastic read and I am delighted to no end that DC went forward with the idea of revisiting these characters. This creative team is firing on all cylinders and I can’t wait to see what is coming next from Future Quest.