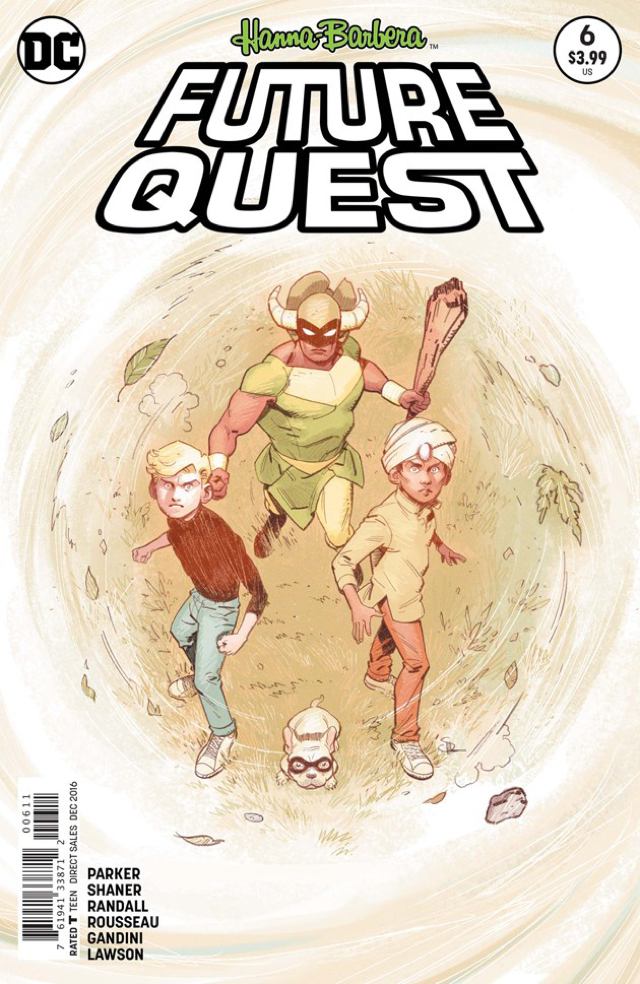 Everything is blowing up and crazy as worlds continue to collide in the greatest radio-serial-turned-visual you have ever read.

I say radio-serial-turned-visual because that’s the best way I can think of to describe the tone of this story. It’s retro nature (and I mean all of this as a total compliment) makes me think of a radio drama with fantastic visuals, with all the right levels of camp and corniness and adventure that you’d get from a radio drama. Hell, when I read Parker’s dialogue that he has for characters I can even hear the over-the-top radio actor voices going along with them, and it just works. That’s the thing about Future Quest – Parker is throwing a lot of crazy and random pieces together in this comic, and it just works.

I’ve said it before, but I’ll say it again: not many writers can make this kind of book work. The wrong tone, the wrong dialogue, the wrong levels of cheesy dialogue and quips and it all falls apart. It doesn’t just fall apart, it crashes and burns. Future Quest does not do that because Jeff Parker is a wizard and he hits the exact sweet spot needed for this comic to have the right tone and flow. The story of this issue progresses nicely and the episodic nature of the story suits this issue really well. Parker is building up to some big events and issue #6 ratchets things up nicely. These characters are dynamic and fun, and Parker has my full attention with this comic.

Shaner, Randall, Rousseau, Gandini and Lawson handle the artwork very well. Shaner, Randall and Gandini’s primary story is awesome and the trio have great chemistry. Shaner and Randall’s styles mesh very well, and Gandini’s colours bring their styles even closer together. There isn’t a poorly crafted page in the issue, including Rousseau and Lawson’s work in the backup. Future Quest #6 is a damn fine looking comic and I have to praise editorial for bringing this crew together.

Future Quest #6 is entertaining and I really like where the crew is taking this tale. There is nothing else like this comic in the whole industry, and this issue is as strong as every issue that has been released thus far. You can’t go wrong with Future Quest.