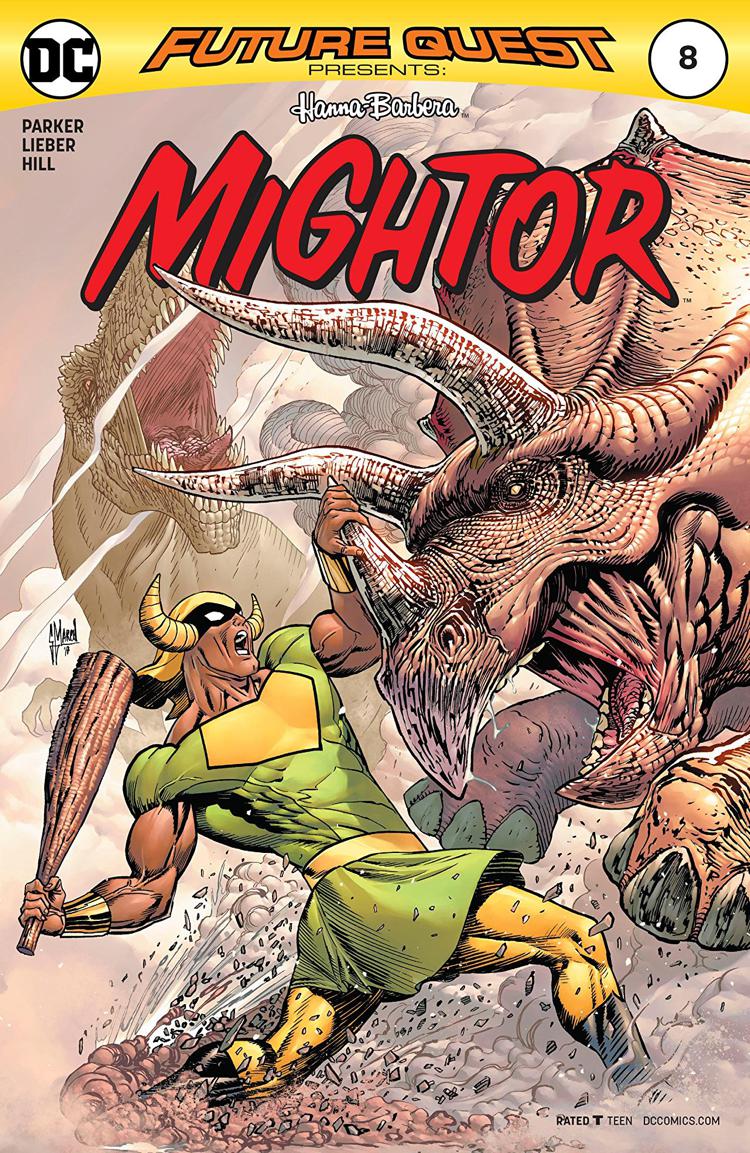 It’s easy to forget the simple joy of a self-contained comic story. It feels like a long time since it was commonplace to start and end an adventure in a single issue. As an anthology series, Future Quest cycles through the Hanna Barbera characters monthly, giving us the DC take on classic characters who would otherwise not get a spotlight.

With Earth’s most powerful heroes off on other missions, Mightor is called in to deal with a possible first-contact situation with an alien race who do not have the best intentions towards our world. The aliens turn up in Switzerland, attracted by the high technology represented by the large hadron collider.

I will admit that my knowledge of Mightor is limited to his role as the judge in the Harvey Birdman: Attorney At Law animated series. That said, everything I need to know about this take is laid out quickly and efficiently at the top of the story. Similar to many heroes like Shazam, Mightor is 13-year-old Ty who raises his wooden club above his head and is transformed into a hero.

Lieber’s art is a great fit for this book. The panels are full of life and action. When the confrontation happens, it has the energy of a Kirby battle. Wooden clubs smashing against alien armor. Giant sound effects. Fighters flying through the air from a punch.

The colors chosen by Hill add tremendously to the art, particularly during the fight. There is a very effective section early in the issue where Hill uses a monochromatic effect to work with Lieber’s layouts and allow Ty to give asides to the reader.

Bowland’s lettering has a gentle rounded feel, helping bridge this feel of an earlier time in comics.

I’m not the nostalgic sort, but this issue reminded me that though I have enjoyed many of the narrative changes in comics storytelling over the years, it can be nice to step back to the comfort-food feel of a good guy fighting a bad buy to save the world.