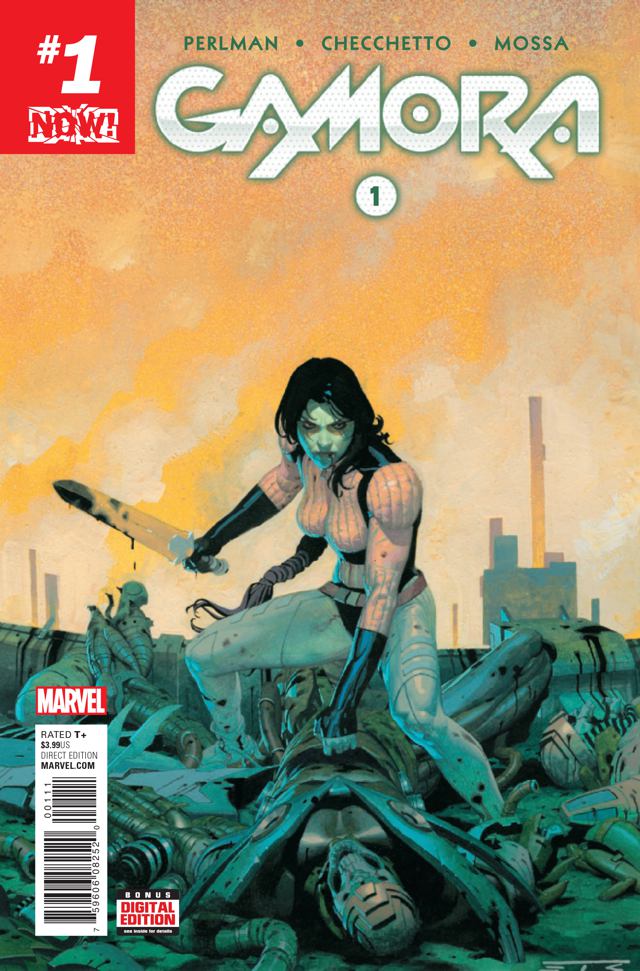 What do you do when you reach the point of no return?

Gamora is under the tutelage of the titan, Thanos, and the adversary of her sister, Nebula. When given the chance to exact revenge for her people, she seized the opportunity, unknowingly contributing to Thanos’ own machinations and Nebula’s desire to snuff out her life. Gamora is one to take chances, and as she endeavors to find a sense of meaning beyond emptiness, she stares the abyss in its face and begins her next chapter.

It’s rare for me to forget a series is coming out, especially a Big Two title starring a woman, but Gamora somehow got past my radar. Since I knew I could come into this mostly unknowing, I decided to give the series a shot. In some ways, it meets my expectations, and in others it doesn’t. I like that the comic doesn’t devolve into the typical fare (think back to Gamora’s earlier costumes), and that she assumes power in a truly ruthless world. Still, the issue at times felt melodramatic, refusing to capitalize on Gamora’s agency and power. There’s something here, but it seems to be hidden among the rough.

Nicole Perlman gets real close with a compelling Gamora, but it still feels like some things are missing. For every plot element, there’s some aspect that could improve the story. Gamora as a tragic figure is explained well through her history and the loss of her people, but seems almost weakened through her relationship with Nebula and Thanos. Even the sibling rivalry point only goes so far. Perlman is working on diving into the depths of Gamora’s psyche to explore why she does what she does, but a ‘show, don’t tell,’ approach would improve the story, moving our main character away from trite displays of somber feelings to complex journeys through her life as it is and as it was.

Marco Checchetto and Andres Mossa assuage my fears by creating an image of Gamora that assumes power and isn’t derivative of male gaze tropes of strong women. Her presence didn’t feel reductive or unnecessarily sexual, and she has a similar stature to many characters in the comic. Beyond the protagonist’s appearance, the environments are impeccable. I love the amount of detail and technology used in each panel. Checchetto is great at illustrating glittering structures, while Mossa’s colors match the dismal tone of the story and Gamora’s feelings. For a series that could have gone the least common denominator route when it comes to women, the art team steered clear of this dangerous visual storytelling format and the story is the better for it.

I want to hang in there for this series, but I can’t lie and say I’m not on the fence. There are a few things I’d take out of the story, such as Gamora being on the floor for about half of it, and others I’d keep, like slashing alien throats in vengeance. Amping up the badass factor would be more of a boon than an empty device for this comic and I feel that’s where it needs to go. There are clearly emotional elements to explore with Gamora, but the execution needs to change if that’s going to be a focus.