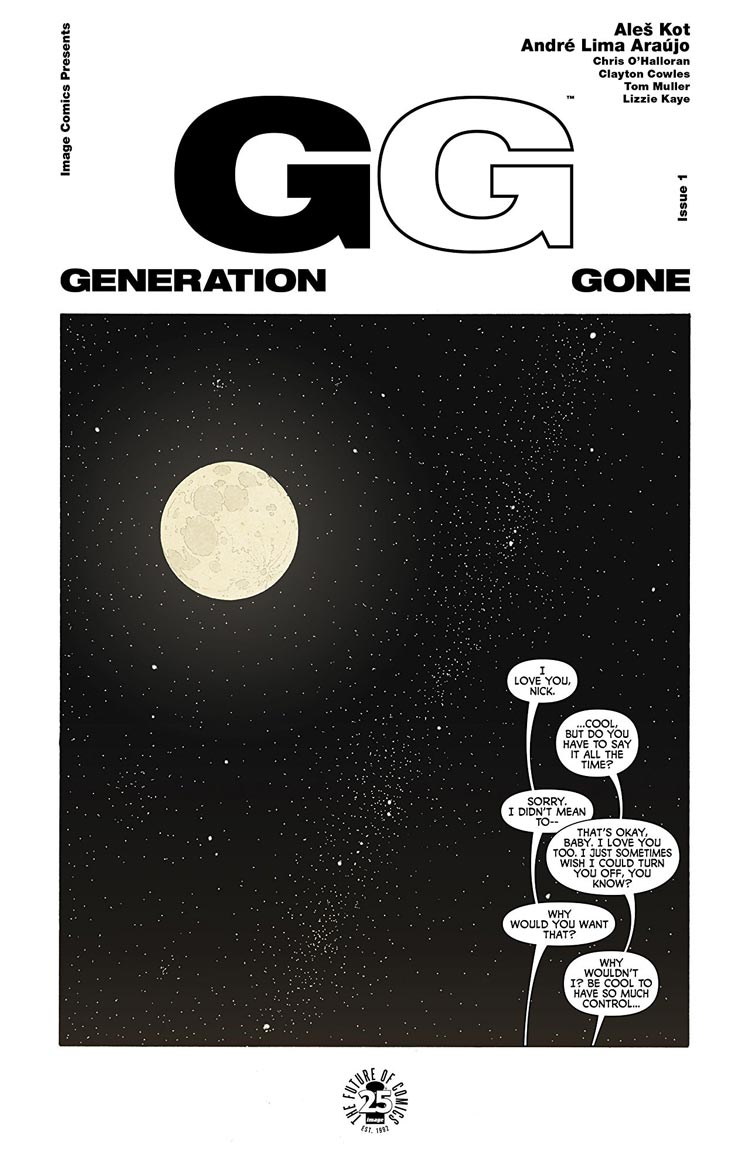 This comic is the start of the future. The future for three millennial hackers that believe they have the perfect plan to set themselves up for life. ‘

Of course, things do not go according to plan because the powers that be and a lone scientist’s plan might have just changed the entire universe and three young people’s lives forever. This is Generation Gone and Kot and Araújo have something incredible on their hands.

The story actually begins on the cover featuring dialogue between two of our protagonists Elena and Nick. Starting the story on the cover immediately settles us into the world that’s proclaimed as America in the year 2020. Kot focuses in on the couple establishing them as people with their own issues that are quickly shown through Araújo on the art which renders the emotions and faces to great effect and fits right in with what he and Kot write. From this short instance under the starry night sky, it gives us a peek into these two characters and how they operate with one another.

The rest of the comic is divided into two parts — split into the eventual converging plot of a scientist setting out to change the world and our three hackers that are accidental guinea pigs in his project. The true nature of Generation Gone can be found in both sides of the storylines. Mr. Akio, a scientist at a research facility, flaunts his knowledge of his brainchild Project Utopia that will “change the world.” Its scientific basis hasn’t dawned on his superiors, who would much rather steer him to completing a project based around surveillance and not the advancement of the universe based through code and superhumans.

Our three hacker friends unite and the dialogue between them tells us everything we need to know about them and their struggles. They have relatable, realistic issues that are common in this day and age, and Kot and Araújo get that across with ease with their conversations. The three hackers begin their operation as Elena and Nick’s friend Baldwin, the leader of sorts, comes into conflict with Nick — who comes off as cold and calculating and an asshole you would want to punch just because. The three move under the guise that they are moving in secret and not being watched. After the practice run, a reveal that doesn’t get played up as big as it could be throws our three hackers journey on a unseen collision course with Mr. Aiko.

Kot and Araújo dedicate wordless pages to the three protagonists and it says a lot, while saying nothing at all. Elena is loving and dedicated to taking care of her mother. Nick is more solemn, down trodden, isolated, cold, and barely registers a presence with his family preferring to be alone in his thoughts whatever they may be. Baldwin on the other hand is strong and focused because he has to be. He keeps himself in shape, is fully aware of the world outside when he sees news of a African-American getting shot, and continues his cycle showing how he’s a committed individual to his cause and well being.

Along the way, Araújo details the scenes with little things in the backgrounds that tell us about the characters even more so than the verbal conversations do. These quieter moments do well to help us understand and feel for these three millennials with a dream to set themselves up for their respective dreams and the rest of their lives.

Mr. Aiko meanwhile ignites the countdown to the our three protagonists change when his Project Utopia comes under fire from his higher-ups, and in a moment of rage and rebellion changes a simple hack into a life-altering mistake. It’s clear Aiko is working with a higher purpose for his actions, but the response to his experiment is something not even he could have predicted would happen.

The “metamorphosis” is drawn violently and chaotically as Araújo, O’Halloran, and Cowles unite to stress the horror and despair of black goo taking over the three young people. It’s the point of no return for everyone involved as one of our trio awakens with their feet a few feet off the ground and that is a small tease of what life could be like for these young people turned experiments with powers.

Generation Gone is described as “Skins + Unbreakable” but there’s hints of Chronicle as well given the circumstances. Despite not having the kicker of the issue happen until the final pages, the characters and story are well worth the price of admission. This is a comic with a very unique and intriguing start with enough familiarity and not to stand out from the waves of comics about people accidentally gaining superpowers.

Generation Gone holds a lot of details, character moments, and intrigue inside of the oversized first issue. Kot, Araújo, O’Halloran, Cowles, and Muller give us a comic that’s full of heart and shows us what’s it like to want better for friends, family, and the rest of your life and how quickly those very same things can change when life hands you either a blessing or a curse in disguise.