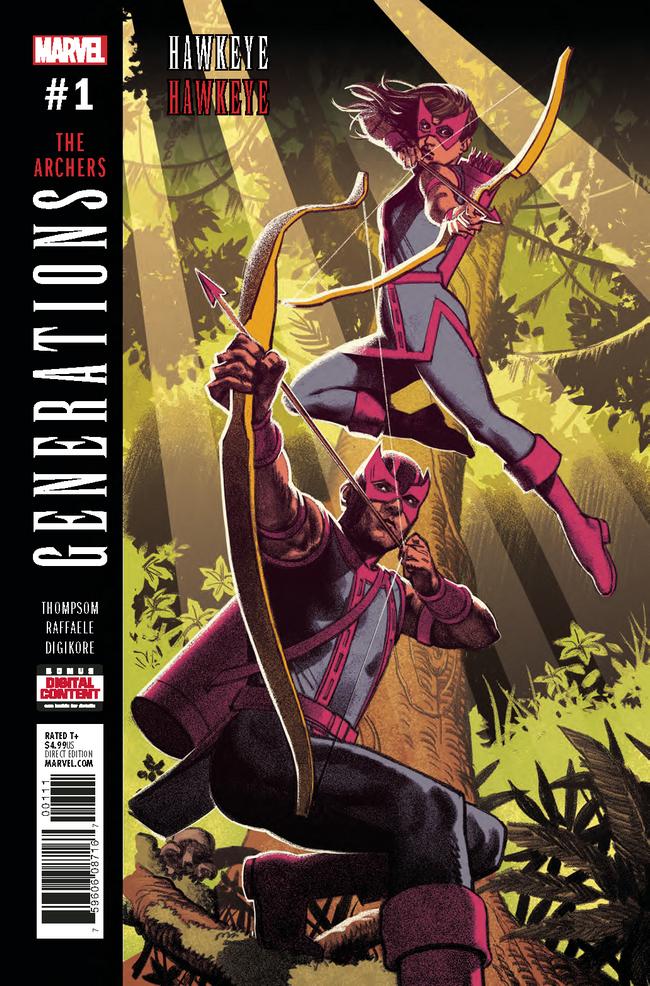 Generations: Hawkeye & Hawkeye, written by Kelly Thompson and illustrated by Stefano Raffaele, is a one-shot presented as part of Marvel’s Generations limited series. It seems to offer the best of all worlds. It stars Kate Bishop, the current protagonist of the Hawkeye solo, but it’s also got Clint Barton, the “dude Hawkeye” who was the first to use the Hawkeye moniker. It’s got references to Hawkeye’s classic comics history prior to Matt Fraction’s Hawkeye run, an arc that greatly defined and redefined both Clint Barton and Kate Bishop, but it’s also not so laden with pre-2012 canon that fans of Fraction’s run won’t be alienated. And, being a one-shot, Generations: Hawkeye would offer a perfect jumping-on point for someone who has never read a Hawkeye book before. That said, where this book fails is reconciling all these elements while, at the same time, providing a strong, compelling narrative.

The plot of Generations: Hawkeye is simple. Kate Bishop finds herself magically transported to a tropical island, with no idea how she got there or why she got there. She quickly runs into Clint Barton, dressed in his purple cowl and tunic, indicating that she is sometime in the past. Realizing this, Kate tries to balance earning Clint’s trust while not letting it slip that she’s from the future.

The rest of one-shot follows the two Hawkeyes as they make their way through a Battle Royale-type scenario, where the best sharpshooters in the world compete to be the last one standing, or get teleported to an unknown location via a mechanism on their locked belts. Kate, of course, is exempt from this; as she time-travelled onto the island, she does not have a belt.

While the mastermind behind this Most Dangerous Game is revealed at the climax of the book, Kate’s reason for being there is not. The set-up for the two Hawkeyes meeting is glossed over, its space-time consequences only barely mentioned. This is an issue that is constant with Generations: Hawkeye – action moves quickly, but larger plot questions are glossed over, leaving readers wondering if they missed something. This is not helped by Marvel’s full-page ads, which break during climactic pages and disrupt the flow of the narrative.

This isn’t to say that there is nothing redeemable about this book. Quite the opposite. Thompson, as usual, is phenomenal at writing Kate’s voice. The dynamic between Clint and Kate is natural and friendly and fun, and even though it develops within a single issue, it does not feel forced. Raffaele’s art, too, is fantastic—the backgrounds are intricate, and the expressions are believable and human. There is one particular panel, near the end, where Kate makes a face of disgust, and it’s quickly become one of my favorite Kate Bishop panels of all time.

To be clear, this is still a book worth reading. Even with its flaws, this entry in Marvel’s Generations line is quite the satisfying book for fans of the two Hawkeyes. The art is great, allowing both Kate and Clint a full range of emotions, and Thompson’s writing should not be undersold. This one-shot is real fun for Hawkeye fans. However, this is not the strongest Hawkeye book, and though great fan service, it leaves readers with questions that cannot be answered within the context of a one-shot. Hopefully Hawkeye #13—the reunion of the two Hawkeyes, featured in the “up next” page of this one-shot—will offer all the strengths of this issue, with none of the lingering threads.