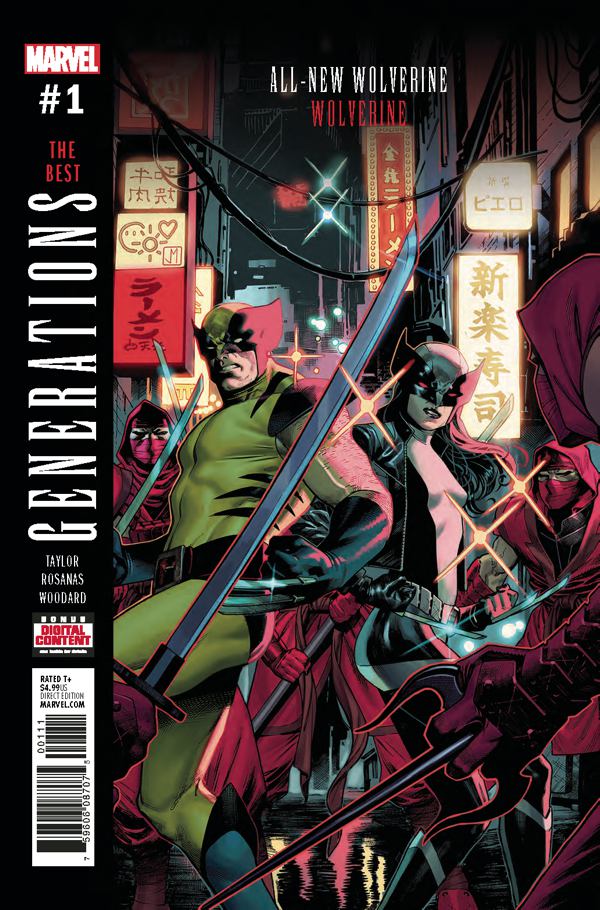 Every single comic fan who has ever read an X-Men or Wolverine comic where Wolverine sports three claws, has sideburns, and answers to “Logan” knows that line and, most likely, instinctively reads at least a portion of it out loud before the end of the sentence. That’s how writer Tom Taylor welcomes us into Generations: Wolverine & All-New Wolverine #1, and, in Logan’s own words, “I’m about to die.”

For their part, the visual duo of artist Ramon Rosanas (if you haven’t read any of his stuff on Ant-Man titles from recent years, please do yourself a favor, regardless of your appreciation of Ant-Man or any of the other components of that series) and colorist Nolan Woodard sink Logan claws deep into a pile of undead Hand ninjas. They leap at Logan, pile on top of their slain comrades, and disintegrate on Logan’s claws, but Rosanas doesn’t let that stop him from truly stacking the odds against Wolverine. Woodard soaks the opening scene in blood red (Hand ninjas formal evening attire) and warm purples – like a bruise oozing blood onto the page from behind it.

Leveraging what I’m just going to call “detailed simplicity”, Rosanas leans into Woodard’s colors, and Woodard obliges, the two artist becoming one, offering letterer Cory Petit ample opportunity to plug in sound effects and dialog. Petit masterfully follows suit, sizing down his effects to scale with the action in-panel (George Pérez would probably love to chat with Rosanas), and choosing to layer caption boxes inline with the action or out of its way completely.

I honestly have no idea how Generations: Wolverine & All-New Wolverine #1 could be any more visually striking. Rosanas’ Logan trends a shade more towards Hugh Jackman’s physique than the stubby brawler Dave Cockrum and John Byrne fancied, but Rosanas is obviously playing to his audience with that choice. Both Wolverines are elegantly choreographed throughout the comic, which includes a battle with the Hand, a warehouse mishap, an airport chase, and a fight with Sabretooth. Rosanas shifts camera angle, using that as effectively as the action contained in each panel – no panel in this comic winds up boring.

Taylor has done a nice job of intersecting his work on Laura Kinney with the “classic” adventures of Logan, to the point of making this comic comfortable and timeless. It’s branded as a Generations book, but this easily could have been lifted from the long-lived Logan solo series, perhaps as an annual.

In Generations: Wolverine & All-New Wolverine #1, Taylor gives Logan depth, taking the reader by the hand and guiding us into Logan’s thoughts. Happy to have a hand in fighting the Hand, Logan settles into the story, and the “classic” Wolverine that Taylor writes for us is more of the samurai gentleman than the berserker-stabby-stabby Wolverine. And it’s awesome. His battle banter with Sabretooth hearkens to yesteryear, but does so without being frozen in any particular era. His nobleness to sacrifice for his “family” makes the reader ache for him, and itch with him, hearing the call to wander and find more trouble to end.