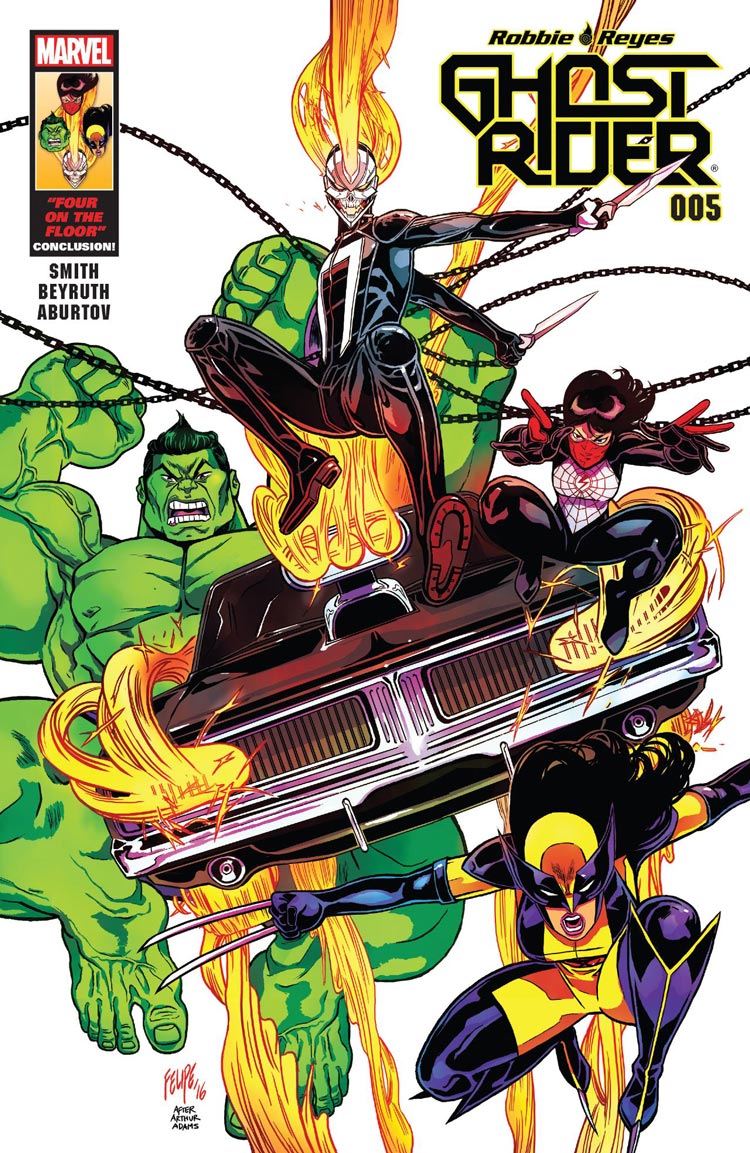 Out of the pan and into the fire! Robbie finds himself going from a minor fight with normal humans to an out of hand battle with an unknown creature in this issue of Ghost Rider!

Smith captures my attention in how he writes the foils of Ghost Rider—Robbie and Eli. They play off one another, make each other more distinct, and bringing out the best and the worst in each character at times. It’s wonderful. I love that, in this arc, Robbie isn’t necessarily the “good guy”. He passes quick judgment on an ex-gangbanger and it’s interesting to see his views on the man evolve in this issue. I also love the fact that there are random dashes of Spanish used in this comic. It makes me feel I’m at least using a bit of my nine years of Spanish for something.

Beyruth has a way with fights, monsters, and vehicles. I love the action in his work in this issue, the chaos and dynamism of the battle that Robbie finds himself entangled in. There’s also something about the mysterious shapeshifting monster that is simply chilling. It should be the picture that pops whenever you google “nightmare fuel”. It’s like Beyruth had a discussion with H.P. Lovecraft and Glen Shofield and this was what came from it.

The coloring by Aburtov and Blee adds to the atmosphere of the comic. They create more drama with their choices, especially with scenes where fire is involved. The lettering by VC’s Joe Caramagna is fantastic. The distinction between Robbie’s inner monologue and Eli’s cements the two as foils. The choices in SFX lettering are great and provide more impactful attacks in the scenes.

There’s this one scene that really grabbed me. I think of it as the Rage Blaster scene.

Fire erupts from every pore of Robbie Reyes as he screams out in agony. Fire engulfs him as he speeds away from his treacherous foe.

Robbie grips his head, flames still swirling around him, the monster rushing towards him on fire.

This is power. This, boy…

Robbie turns to his opponent, crouched like a tiger ready to pounce, harnessing his flames, consolidating them.

And like the God Warriors from Nausicaä of the Valley of the Wind, a molten-like flow of pure fire bursts through his mouth, his jaw dropped like a boa constrictor, smoke fuming off of his head as it blackens the area around him and the monster.

The monster tries to find a way to surpass the heat and fury, changing its form constantly until it has no other option but to cause itself to become dormant, seeing no end to the hellfire in sight.

You should be reading Ghost Rider.