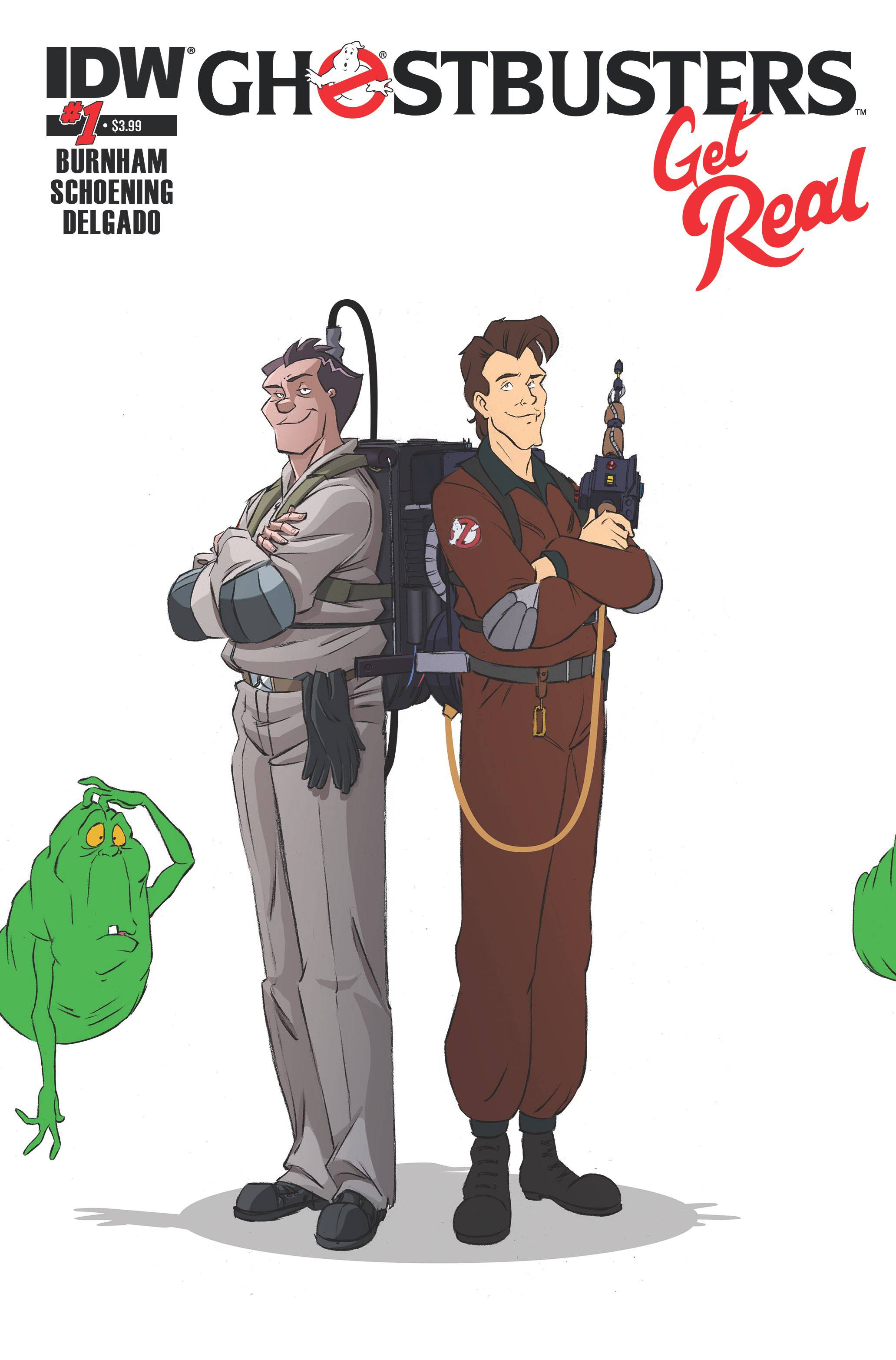 Ghostbusters Get Real #1 is another entry into the line of mini-series featuring IDW’s Ghostbusters crossing over with nostalgic icons of Saturday Mornings. This time around instead of meeting Heroes in a half-shell, the Ghostbusters team up with the Real Ghostbusters from the 1986 series of the same name. Fans of the franchise know that the line-ups are vastly different from one and another. IDW’s Ghostbusters is aimed at older audiences focusing on movie characterization. Real Ghostbusters was a Saturday morning cartoon version of the movie and with that goes all the trappings: More focus on younger kids and toys.  They are similar but not the same.

Erik Burnham, the writer of the TMNT/Ghostbusters crossover amongst other Ghostbuster titles, returns to have this Crisis on Two Worlds event. He dresses up the story initially as an episode of Real Ghostbusters and it plays off like a Saturday morning cartoon perfectly. The dialog, plots, and characterization are straight out of the cartoon.

The plot and pacing implies the mini-series is written as one long story and not too much is focused on a single issue telling its own story. The decompression allowed for character moments to shine, though. Burnham knows how to write Ray and the rest of the cast. They all get their moments and help make the comic a better cold read to the average person.

The world differences are amplified by the art team of Dan Schoening and Luis Antonio Delgado. Together they bring a stark contrast between the worlds to help the reader visualize the distinct differences. The coloring of the pages and even characters reflect their worlds. The Real Ghostbusters universe is colored with vibrant tones that pop off the page and resemble the world of a cartoon. Delgado even included a filter to the page that makes it resemble a television set. Small touches like that help set the tone of the story. This is in contrast to the IDW universe where the backgrounds are more realistically colored and toned.  Flipping through the book you can see the differences. Combined with Delgado’s choice to color the Real Ghostbusters in their native palate the coloring on Ghostbusters Get Real is a major player and not an afterthought.

Schoening takes on the difficult task of drawing different character models and styles to match the universes. His unique take on Ghostbusters help stand out against the on-model designs of Real Ghostbusters. Both models look animated but in stark contrast of one another. It makes the characters look like they are from another world and not just a palate swap.

The action of the comic is crisp and easy to follow. The pages are well composed and complement the pacing of the story.  The overuse of panel breaks (when a portion of a panel overlaps the adjacent panel) is problematic. Panel breaks are usually reserved for big exciting moments. Essentially the action is so intense or massive that you have to jump off the panel itself. Not usually for a part of the hair or arm of a character talking. It doesn’t serve much purpose and weakens the impact of the breaking of the panel. Will say it helps move the story faster but the benefits are not significant.

Overall, Ghostbusters Get Real #1 is a fun trip down memory lane for fans of the cartoon. The story seems to be a fun one full of adventure. The art is tremendous at setting the stage. The writing is funny and character driven. There are flaws but they aren’t something that ruins the overall reading experience.