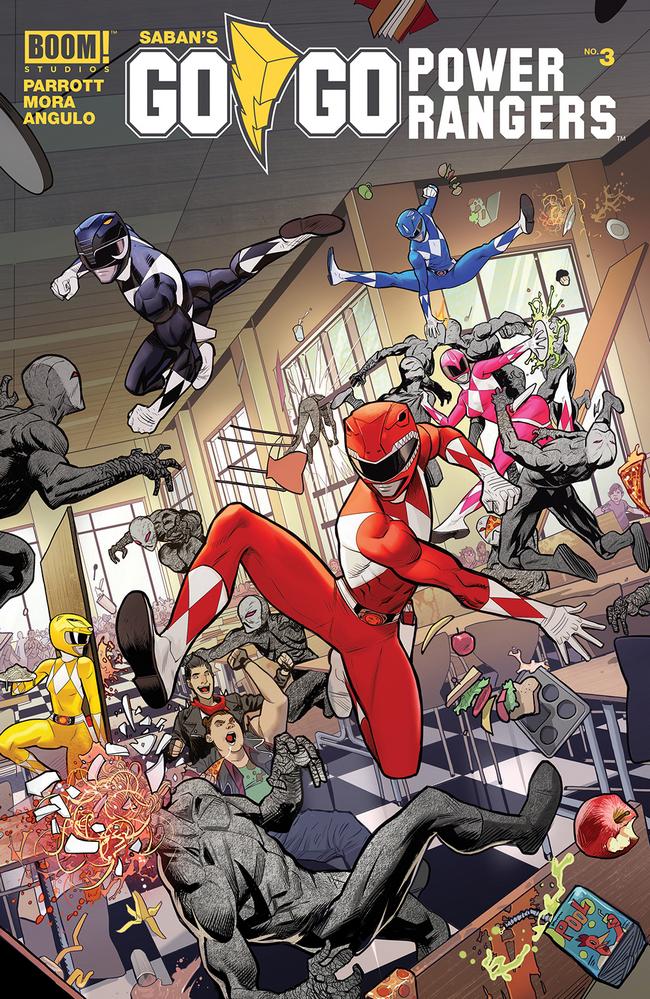 We open with a flashback to Billy’s childhood where, interestingly enough, we find that he and Skull were best friends. This is in stark contrast to their high school years, where Skull and Bulk team up to constantly harass Billy. The expressions on Skull’s face are so well-done – we really see his shame at what he’s become and I’d love to see his transition from friend to bully, and the reasons why he’d turn on Billy.

The Rangers help clean up the damage caused by Rita’s monsters while being tracked down by Rita’s new shapeshifting Infiltrator Putty, which is hilariously incapable of blending in with humans. Rita reveals her cunning, manipulative side in a story she tells Goldar about her brother’s (oh jeez can we collectively forget about Rito Revolto please) dragon.

Trini’s one-sided crush on Jason is both heartwarming (ngl one of the training session panels is kinda hot, don’t @ me) and heartbreaking, because fans of the show know how it’s gonna turn out.

Once the Infiltrator Putty learns how to lure the Rangers out, Jason and Kimberly are sidelined for different reasons, which puts civilians at risk in a frightening cliffhanger. The cost of being the Rangers begins to mount up as they realize how much of their normal lives they’ll have to sacrifice.

The art continues to be great, with Dan Mora’s real strength being the characters’ body language, poses and facial expressions. Combined with Raúl Angulo’s watercolor-esque technique, the book is infused with very realistic emotion over a slightly cartoonish style. It adds a lot of gravity to what is, at its core, a bit of a silly premise, and I feel like it’s just what the concept needed to appeal to a wider audience.

However, as I’ve said before, the glaring problem with GO GO POWER RANGERS is that it’s not as effective a tale if you’re not interested in the lore and backstory. I quit watching Power Rangers around Season Three, when they got ninja powers, most of the original cast had been replaced, and I started getting into grunge and playing guitar instead of watching television. The original Mighty Morphin’ cast were my Rangers, so of course I’m a prime target for this comic, but I can’t see it appealing to Power Rangers fans who came in around, say, Jungle Fury or Dino Charge.

That caveat aside, it’s an excellent comic, even more so if you loved the original MMPR cast, and I highly recommend it.