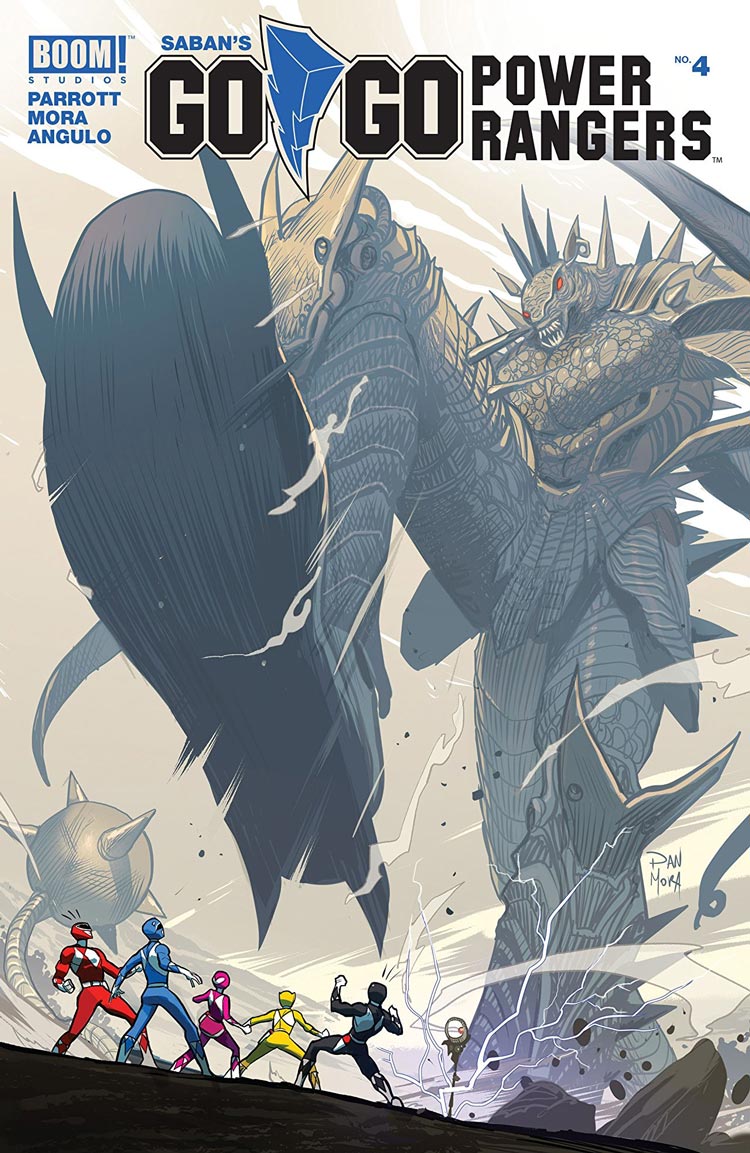 We open on a scene four months before the Rangers got their powers. Kimberly is at a fancy restaurant with her arguing parents and tries to defuse the situation by calling over an employee, who we see is Zack. Zack gets fired because of a complaint Mr. Hart makes to the manager, and we see the source of the resentment Zack initially harbored towards Kim.

In the present, Rita’s monster continues on its warpath while Zack, Trini and Billy do everything possible to stop it and keep the citizens of Angel Grove safe. It’s rough going without Jason and Kim, and Kim is torn between staying with an injured Matt and needing to morph to help her teammates. Ultimately, she chooses her fellow Rangers, but not before handing Matt over to a passerby, who promises to get him to a hospital.

Turns out the passerby is Rita’s Infiltrator Putty.

The battle escalates in traditional Power Rangers fashion when the monster grows to kaiju size. The Rangers summon the Dinozords, but without Jason and his Zord, there’s no way to combine into the Megazord and destroy the monster. Zack has Billy cause a blackout in the city, which enables Jason to sneak out and call his Zord.

All seems well after the battle until we cut away to Rita’s moon base, where we see that she’s found a way to keep a very, very, very close eye on the Rangers. This won’t end well…

This intro arc to Go Go Power Rangers has been extremely well-done. Dan Parrott weaves action and personal drama together into a serious page-turner, and I’m impressed with his take on the Rangers. The TV show wasn’t exactly a wellspring of character development, and Parrott gives the Rangers much-needed depth by exploring their fallibility.

Whereas the show erred on the side of squeaky-cleanness for a younger audience, Parrott eschews that unrealistic perfection for relatability. Jason in particular has an important arc I want to see explored more, as we learn that Zordon chose him as leader because he used to be a bully when he was younger. Whatever happened to Jason to make him work hard to make amends for his past is something I very much want to see.

The art team of Mora, Angulo and Dukeshire deliver a solid complement to Parrott’s script once again. The battle scenes are appropriately chaotic without feeling cluttered, and the quieter scenes are framed in a variety of “camera angles” that are great at setting a tone.

The panel of Jason alone in his room towards the end conveys a solitary kind of guilt and shame — is it because of Jason’s failure to be there to lead the battle, or is he contemplating his past? Regardless, this team is incredibly gifted at illustrating body language, and I hope they all stay on for the duration of this book.

Overall, Go Go Power Rangers has been a great, fresh take on these characters, a character study mixed with powerful action sequences which appeals to fans of the original Mighty Morphin’ Power Rangers. Pick this one up.