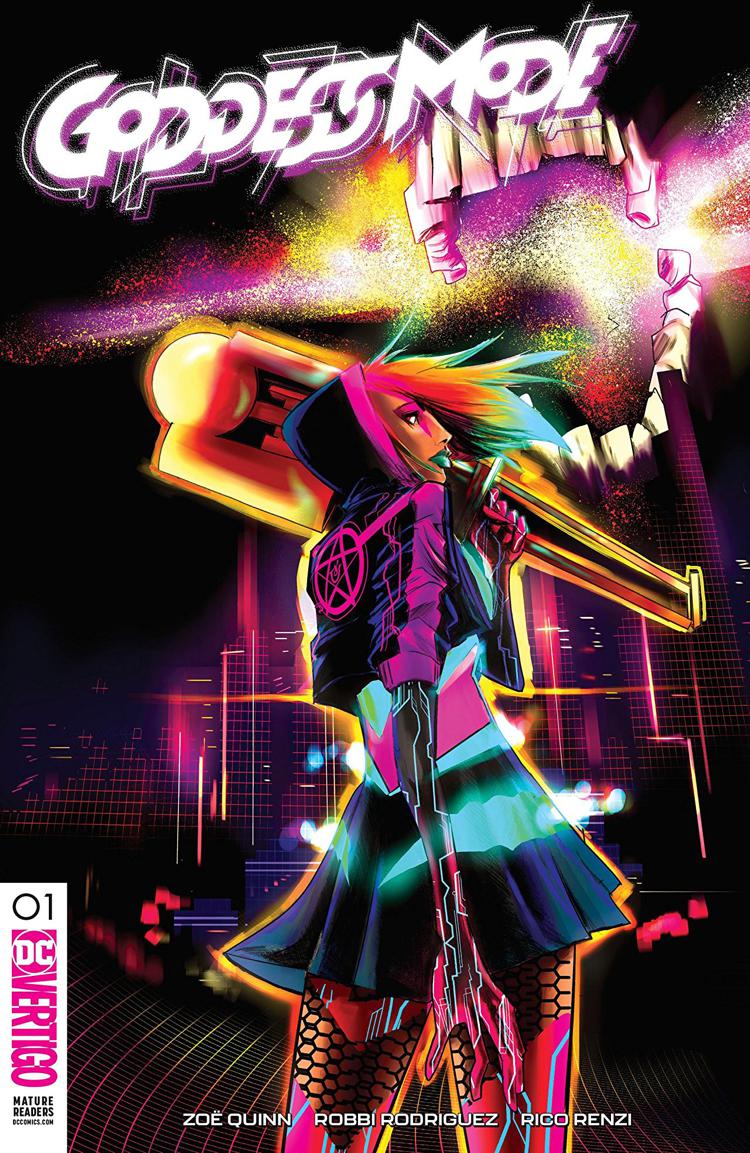 Zoe Quinn and Robbi Rodriguez bring a video game inspired world to life in ‘Goddess Mode’ to the DC Comics’ Vertigo imprint that is both a refreshing young adult graphic novel for the sci-fi genre and an incredibly aesthetically pleasing world filled with color and movement.

The Goddess of Coding

Introduced to the incredible A.I. called Azoth that controls life itself, we also meet the brilliant young woman named Cassandra Price, the junior coding assistant of the company Hermeticorp that oversees Azoth. As Cassandra tries to find answers to the questions about her father’s disease and what happens behind the scenes of Hermeticorp itself, she accidentally dives into a whole new world filled with neon monsters and three magical female fighters.

Vertigo being an imprint for the young adult, Zoe Quinn presents our main protagonist as a young woman wondering her true destiny in this universe that runs on artificial intelligence. Quinn showcases the strong Cassandra, the manipulative Clive Benson and other characters that are all swept up in this company that is clearly doing shady dealings. How perfect for Cassandra to escape this world where her opportunities to flourish are stifled and enter unfamiliar territory that can easily become the destiny she has been awaiting. Quinn’s fresh and numerous character showcases a refreshing take on the world of A.I. in comics and the strength of women in a male – and A.I. – dominated world.

It isn’t just Zoe Quinn’s writing that stands out to make issue one of this new series fun and inviting. Spider-Gwen co-creator Robbi Rodriguez’ sci-fi universe have panels spilling with bright and bountiful colors. The blue in Cassandra’s awesome hairdo, the lights that highlight the Los Angeles of the future and the incredible journey to the new coding world filled with dangers and magic all are outstandingly presented in depths of technicolor that screams excitement and adventure. The illustrative team outdid themselves in visually creating this A.I. universe that can pull in any reader, young and old.

Quinn and Rodriguez’ first issue of Goddess Mode is page after page of color and curiosity. I’m greatly looking forward to Cassandra’s character development, learning who the three magical heroines of this new world are all about and how crazier this neon whirlwind of technology and monsters can get. I’m definitely ready to find out!