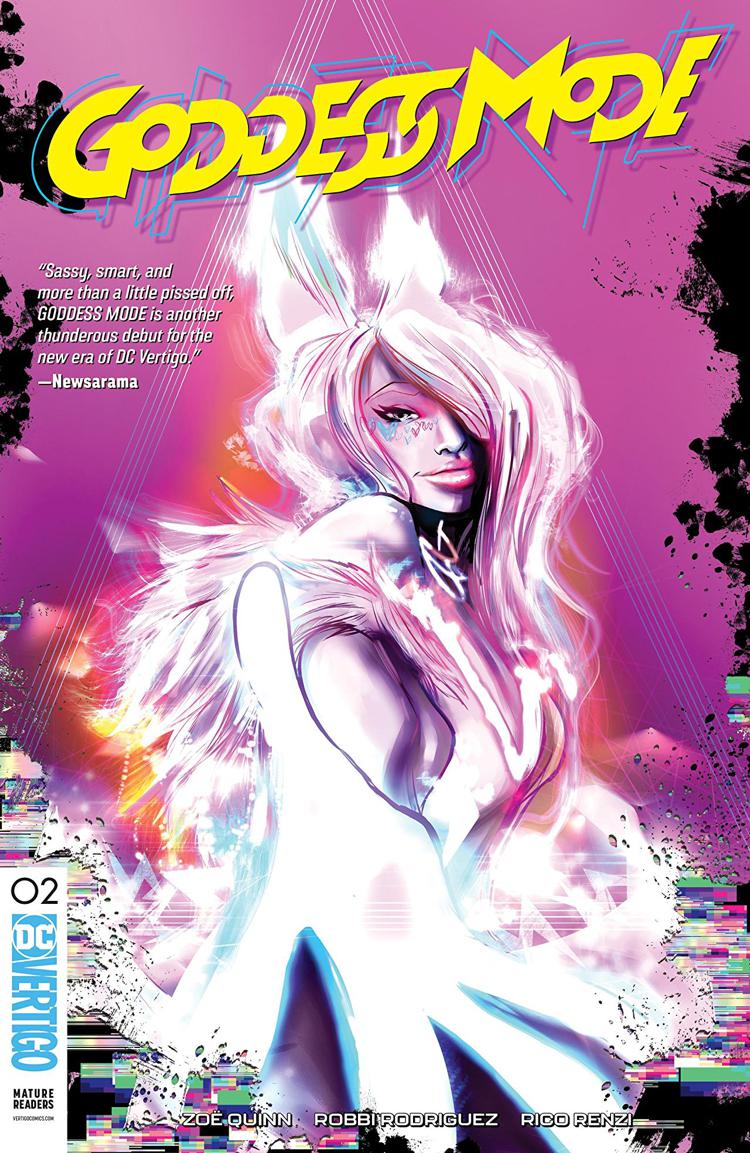 The War Within The Azoth

The second issue to Zoe Quinn and Robbi Rodriguez’ sci-fi young adult book is as visually electric as it is explorative when it comes to observing how humans live and thrive within a technologically driven world. From our main protagonist to the ultimate baddie, each will learn their true destiny within digital universe.

Human Interaction Has Left The Chat

As tech janitor Cassandra Price learns more about her magical saviors from the Daemons of Azoth, she discovers not only is she part of a small but significant group of powerful beings but also there’s more at stake for Cassandra – and her whole world – than getting fired by the CEO of Hermeticorp.

Zoe Quinn provides wonderful introductions to the brightly colored and eccentric leading ladies that saved Cassandra’s life knows as The Tall Poppies. Farrah, Tatyana and Mary, who each have their own special abilities, play an important role within Cassandra’s universe now – being her family. Which, for our protagonist going through family drama herself in trying to learn why her father is sick with a seemingly incurable disease, is vital at this point of the story.

While Quinn presents themes from unity to survival, there is different commentary that touches upon how people represent themselves in the digital world (through the Azoth) – or online – and the real world (or the Analog). Living in a swipe left, swipe up reality can take away from having real conversations at times. This digitally enhanced universe in ‘Goddess Mode’ shows the A.I can give a platform for positive interactions and communities and an easy place for cyberbullying to thrive, which is very relatable in our own lives. Cassandra has to take all of this into account while simultaneously learning there’s an entirely new digital plane that can mean life or death.

The creative team of Rodriguez, Renzi and Bowland bring forward bright pastels and beautiful neon pallets to represent not only Cassandra and The Tall Poppies but both the Analog and the Azoth worlds. Certain panels truly captured these Technicolor moments, from travels through digital planes to the colorfully punk and even at times baroque aesthetic of each magical heroine. Rodriguez’ pencils that overflow with consistent movement and Renzi and Bowland’s color and light matches with Quinn’s video-game esque journey of a storyline.

If They Want To Make Us Monsters, We Can Be Heroes

Issue #2 of Goddess Mode did so much exploration of the characters, in particular their personas and past and I’m already rooting for The Tall Poppies to continue on being the colorful heroines of this digital wonderland. Can’t wait for what Quinn has in store for Cassandra and am greatly anticipating what her special power is within the incredible and terrifying Azoth.