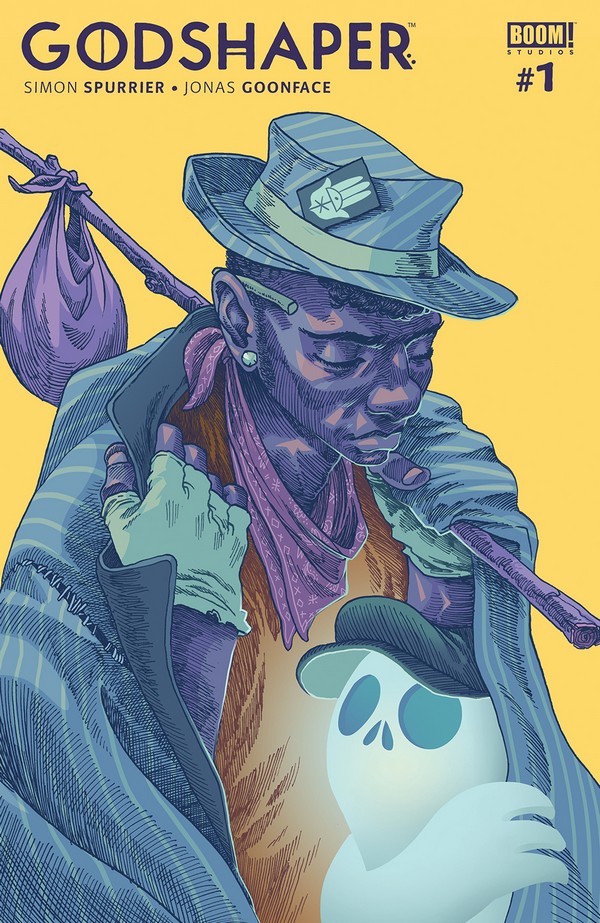 After 1958, the world went screwy and almost every human found companions in Gods, ethereal beings straight out of our dreams (or nightmares) with a range of abilities. Some, the Shapers, weren’t so lucky and didn’t have a God to put their faith in. Ennay travels the land as a Shaper, reviled by many even with their uncanny ability to reshape the powerful beings that exist with humankind. Along the way, they meet Clara, aka Smudge, who has a dangerous plan to change things for herself and potentially others. Though Ennay would rather her kick rocks, the story reveals a new side of them and their abilities.

This comic is a reminder that you can’t judge a book by its cover and that a meaning isn’t always apparent in a title. Godshaper’s environment is strange and wild, from its people to their culture. Simon Spurrier writes a story that shows humans really don’t change and there’s always a brand on those we don’t like. Even still, these same people marginalized by society often provide some need, whether to the rich or others like them, and this comes to a head through the story’s protagonist.

Small elements of Godshaper #1 are enjoyable, but this story is a hard sell. With no frame of reference, it’s difficult to grab hold of the language and culture, though I admire the care put into the construction of this new world. Creating an entirely new universe and context for a story is no tiny feat, so while I have reservations about more of the nuances of the landscape, I feel that it could build into something bigger.

I’m glad the story takes time to introduce characters who are not typically represented. Ennay is visibly queer, shown in their brief romantic forays with people of differing genders and appearances and marked by their make-up in performance. Ennay is one of many different presentations of people within the world of Godshaper, and I like that they show up in varied ways through the story. Within Ennay is a big piece of context that reveals what reality is like among believers and shapers alike, the linchpin of the story and what holds everything together.

Jonas Goonface uses a slew of odd and wonderful artistic styles. Some scenes feel relatively normal, even for a setting with wonky physics. Others have distinct uses of contrast between warm and cool or shifts between hyper-detail and effective minimalism. Goonface’s talent is more than suited for a story of the strange. My absolute favorite image is of Ennay cast in hot pink eyeshadow and lipstick, performing for the Cantik crowd. This picture is glamorous, beautiful, defying, and something which makes this story stand out through Ennay and the entire context around them.

From the first page, Colin Bell’s letters were fitting. There’s a softness to them that sometimes stands at odds with Goonface’s rougher images and the tone of marginalization in Spurrier’s story, helping the story to feel playful despite the goings-on. The change from deeper letters to translucent subtleties create an interesting dynamic in dialogue and storytelling. Bell adds a new layer to Godshaper that enhances storytelling and keeps its world intriguing.

I can definitely say I’m invested in this story. Even with some of the issues regarding worldbuilding and detail, there’s enough for readers to grab and characters that are refreshingly new. The creative team works on all levels and all of their efforts lend to a tale with many nuanced moving parts. Godshaper is weird as hell and it works.