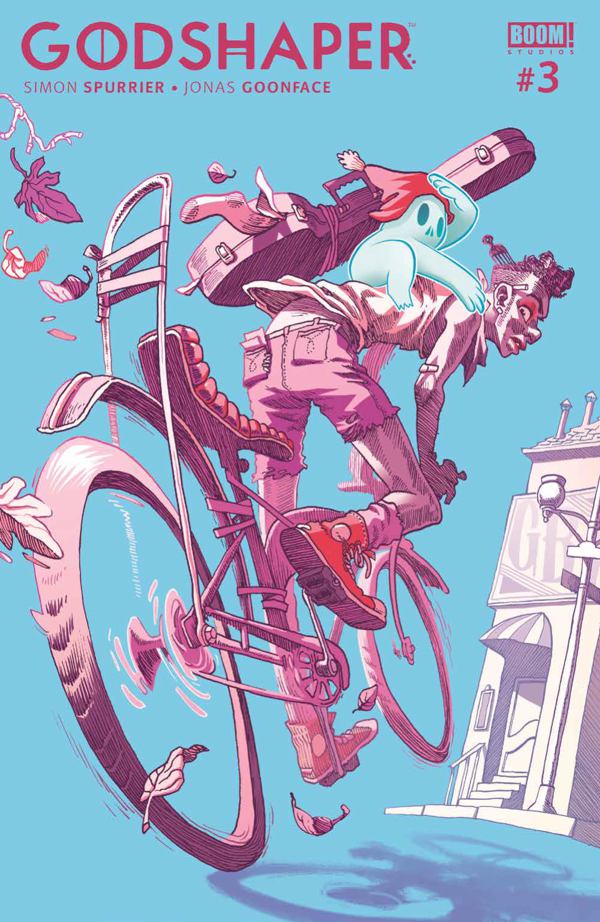 Ennay and Sal have a job and neither of them are keen on it. He shows her what standing up for herself and others could mean in the long run, revealing the dire predicament many Shapers are thrust into. As they are put in danger’s path, Smudge makes a reappearance and Ennay makes a getaway, leading to more clues about his little friend Bud.

In this latest issue, we get to see an increasingly open Sal and much more vulnerable Ennay. Sal speaks much more and she is beginning to assert herself and her sense of right. Ennay on the other hand still enjoys raucous fun, but he finds himself responsible for his new ward, changing his demeanor and bringing out his noble qualities more often. Simon Spurrier is slowly allowing each of the characters to develop, but it does not feel as though this is a long or arduous task. Instead, watching them change in real time is a grand experience and it feels as though they are all being deliberately and carefully handled.

In this installment, we get to peek more into the world around them and how it is continually dangerous to their existence. I appreciate that Spurrier continues to unfold Godshaper and provide a larger context for the series. The infusion of interpersonal politics, in the vein of societal oppression, is important to the story, though there are times I am apprehensive about it. There are clear analogs that have been drawn to sexual orientation and/or gender but not so much race, which I thought would be more prominent given the year 1958 is such a significant point in the story. The chasm between Believers and Shapers is much more akin to class disparities, or potentially the axis of disability, yet it also sometimes reminds me of colorblind politics, leaving me to wonder what impact the story would have if it took a more intersectional approach beyond physical presentation. Any time politics more overtly emerge in the comic, these thoughts color my reading, and I feel they continue to provide the capacity for deep and meaningful conversation about how oppression manifests in Godshaper and the contrast with reality.

In this issue, Ennay mentions that when someone treats you like an animal, the worst thing you can do to them is be more human than them, and to give up on that makes you like them. While I am no stranger to this sentiment, it also is one used in the real world to dismiss rightful aggression from marginalized people, whether through forceful protest or even as far as violence in self-defense. This is an odd message for me in the context of the series because it doesn’t seem particularly helpful to the story or to illustrate what makes Ennay ‘good.’ In fact, I think we already have enough evidence of that and this idea takes away from Ennay’s development. I understand its place in the story and why it came about, but I feel this lesson could have been expressed differently, to the benefit of the narrative.

With this critical engagement of the politics of the comic, I also recognize that Spurrier is expertly conveying the difficulties of being a Shaper in a Believer world. There is an obvious power differential between the types of characters we see, and very often that is played out through transactions, the jobs that Believers want Shapers to do even though they won’t recognize the humanity of the people from whom they ask favors. Even with my challenges above, this works well within the context of the story and serves a vital function in further highlighting what makes Ennay a worthwhile protagonist.

Jonas Goonface is truly remarkable in this third issue for the series. The first page is immediately eyecatching for its queer and energetic Cantik scene, but also for how Goonface creates a path for visual storytelling. The flow from panel to panel is an exercise in visual structure, enhancing the dramatic tone of the issue. I love that this issue feels like it has a completely different look and it seems to be evident of Goonface’s grasp of plot, pacing, and direction via visual art.

Goonface also casts Ennay and Sal as rather normal, stable visual markers compared to the chaos of humans and gods that surround them. They appear to be illustrative centers, offering readers a keen focus on their behavior but also highlighting the large variance of their environment. Such a technique works in tandem with a story that addresses oppression and being outcast, touching on the reality that what can be considered ‘normal’ can very often be steeped in malice, hostility, and faux-superiority.

Colin Bell’s letters exemplify realistic cadence in communication. This effect is most noteworthy with Sal and it serves as the best portrayal of her growth and confidence. Notes of assertion dot her speech as she argues with Ennay about the Conferring. For everyone else, Bell puts emphasis in important places, while using lighter tones that weave in and out of the dialogue. The comic ends up being the perfect home for Bell’s particular style of lettering.

Godshaper continues to engage me in its story and the underlying politics. I keep finding myself intrigued and challenged by what’s presented, and while I may not be completely on board with everything, I still find this story valuable as its own work and in how it connects to our world. Dissecting this series through its art, writing, and narrative is a worthwhile endeavor, and even on the plane of pure enjoyment it is an evocative story with amiable characters. I’ve continued to enjoy reading and examining Godshaper and I hope it is a story that finds its way into many people’s longboxes.