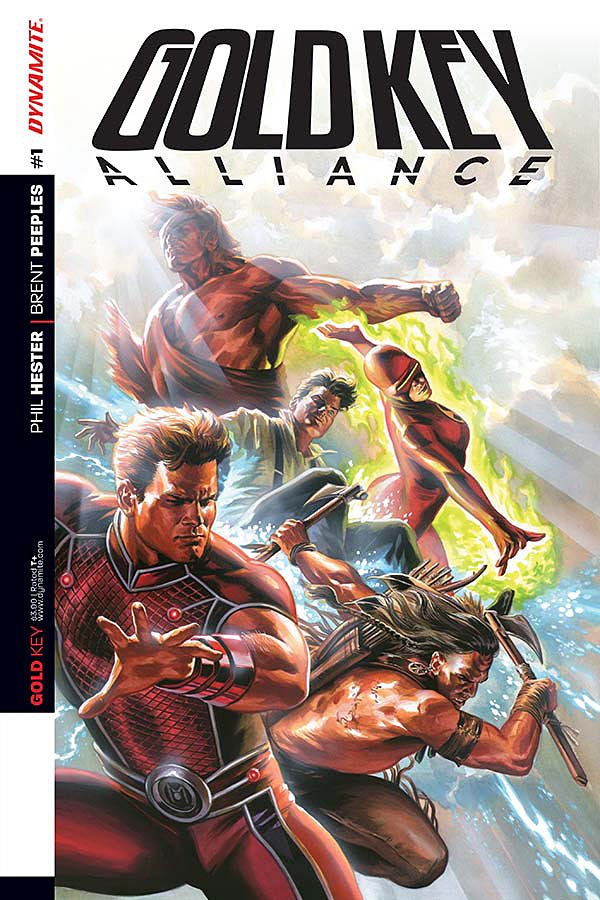 Four heroes — Turok: Dinosaur Hunter, Magnus: Robot Fighter, Solar: Man of the Atom, and the Mighty Samson — find themselves on the same Earth for the first time in comics history. As they struggle with existence in this strange new world, an evil arises that will unite them all.

Gold Key: Alliance #1 is a series of five vignettes that introduce four heroes and a villain. Samson is a schizophrenic indigent living on the streets of New York City, whose experiential world is a seamless halucination of a post-apocalyptic wasteland populated by mutants.

Turok is an American Indian game warden and reality show host who protects a flock of dinosaurs. Magnus is a Secret Service-type agent who protects a government official from human-like robots. Doctor Solar is an enigmatic black woman who defends an African village from warlords using her ability to manipulate matter at will. Doctor Terra blows somebody up to show how evil she is, and apparently does not care for Samson.

There is no plot to speak of, and only the barest of connective tissue between two of the vignettes. Forgoing plot to focus on character isn’t necessarily a bad thing; indeed, some of the best stories are character-focused. What we’re presented with, though, doesn’t establish character in any meaningful way. We see characters fighting and using their powers, then move on to the next character. We get skills and abilities and a one-sentence summary of who each character is. The character development is no deeper than a character sheet for a tabletop role-playing game.

There is an adage in writing that one should start one’s story as deep in as one can. This comic is firmly ensconced in the part of the story that would have been cut if that adage had been followed. Nothing in this comic is not contained in the brief character summaries on the title page. Indeed, there’s actually more information in those summaries than there is in the comic.

On my initial read, I thought Turok was a game warden with fantasies of being a reality host, narrating his actions in his head. Finding out that he’s actually a host and was just rehearsing a script took away the most interesting thing about him.

Brian Peeples’ art enhances what is otherwise a fairly unexceptional comic. The book opens with a striking splash page of a screaming Samson, and Peeples’ use of thick lines and cross-hatching works great in detailed close-ups. In group scenes and from greater distances, though, the art becomes more simple and less engaging.

That said, the attention to detail and design on the various non-human creatures, whether mutants, dinosaurs, or robots, is superlative and bodes well for future outings. Moreover, there are enough detailed, if somewhat static, panels to give the comic life it otherwise lacks. Other art stand-outs include a fist-fight between Magnus and a human-doppleganger robot, and Turok warding off a gang of dinosaur poachers with a bow and high-tech arrows.

The coloring, provided by Morgan Hickman, is muted, but effective. In particular, the primarily grey-brown-orange color pallette is thrown into sharp relief when the background goes red as Magnus beheads a robot.

Gold Key: Alliance #1 does a somewhat interesting job building a world in which these characters live together, given that Turok typically lives between a few hundred and a few thousand years in the past, while Magnus and Samson live in mutually-incompatible post-apocalyptic futures.

If you have a pre-existing interest in these characters, seeing how the creators weave them into a new world may be worth the price of admission. No prior knowledge of these characters is expected or assumed, however, so if you’ve never encountered these characters before you can hop in without doing any prefatory reading.

It’s difficult to recommend this comic. Even if the series subsequently becomes far more engaging, the content in this issue is deeply inessential. The art, while interesting, isn’t good enough to make it worth a look on its own, and the writing has nothing new to say, nor does it find an interesting way to say it. There’s promise here, and the potential for a fine comics story, but that potential is unrealized in this first issue.